An Advocate for Full and Equal Rights

Morris had an expansive vision of freedom that went beyond his antislavery work. Like the activists leading the U.S. civil rights movement in the 1950s and 1960s, Morris’s activism was multifaceted. In addition to abolitionism, he worked tirelessly to desegregate schools, militias, and public spaces, and was a full-throated advocate of equal voting rights for women.

A little over a year after Morris’s 1847 admission to the Massachusetts Bar, he was hired by Boston printer and activist Benjamin Roberts to handle a high-profile civil rights lawsuit. Roberts asked Morris to sue the Boston public schools on behalf of his five-year-old daughter, Sarah. In February 1848, a Boston police officer forcibly removed Sarah from the public school that was closest to the Roberts home. Because of the color of her skin, the young child was forced to make the longer journey to the Abiel Smith School, which was, at the time, one of two Boston public schools for Black children.

“The most important achievement on the part of our people and that which will be the most enduring, and prove most beneficial in its results to us and our children here and elsewhere was the abolition of Caste Schools in our Commonwealth. I had the honor to inaugurate that excellent and important measure, & to frame and pen the first petition sent to the School Committee here asking for Equal School rights. I had previously secured such rights to the children of color at Salem, my native city, and was determined to overthrow the separate school system here” 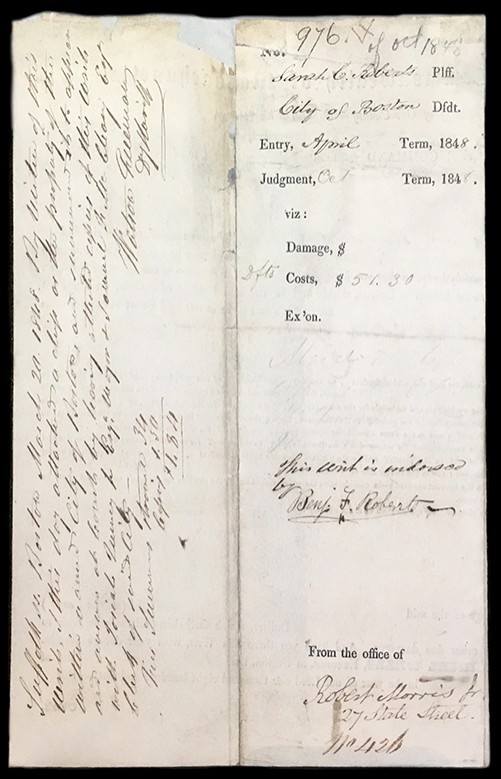 Morris lobbied for school integration as early as 1843, when he filed a petition to integrate public schools in his hometown of Salem. That effort came to fruition more quickly than a parallel effort in Boston. In April 1848, Morris sued the city of Boston, arguing that the city was unlawfully denying Sarah Roberts her right to a public education by forcing her into a segregated school. This writ (the equivalent of a modern day complaint), signed by Morris, initiated the lawsuit. His arguments focused on the fact that Sarah had to walk past five White primary schools in order to reach the Abiel Smith School and that she should be able to attend the public school closest to her home. 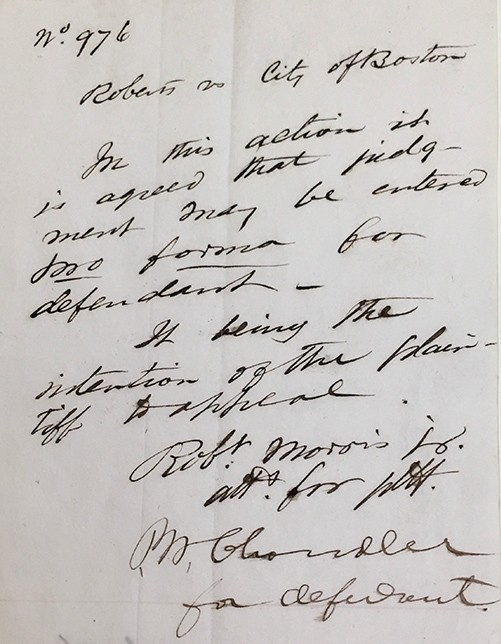 When the trial court rejected his claims, Morris appealed and joined forces with Charles Sumner, a White abolitionist lawyer and future U.S. senator. Led by Chief Justice Lemuel Shaw, the Massachusetts Supreme Judicial Court rejected their arguments and adopted a “separate but equal” ruling echoed later by the U.S. Supreme Court in Plessy v. Ferguson (1898). However, the constitutional arguments about equality before the law that Morris and Sumner made—inspired by Black activists and parents who had been working to integrate Boston’s schools for decades—resonate throughout U.S. civil rights law. Indeed, their expansive understanding of equality in education can be seen in the U.S. Supreme Court’s 1954 decision in Brown v. Board of Education, which reversed Plessy.

Chapter 256 of the Massachusetts Acts of 1855, concerning public schools.

Despite the devastating loss in Roberts v. City of Boston, Morris and other Black activists such as Benjamin Roberts and WIlliam Cooper Nell continued the fight that they had been waging for years. They persisted in bringing lawsuits and petitioning the legislature. Finally, in April 1855, the Massachusetts legislature effectively overturned the Supreme Judicial Court’s decision in the Roberts case by enacting this law, which required the integration of Boston’s public schools and provided damages for any student excluded.

Federal and state law restricted service in state militias to White male citizens. By the mid-nineteenth century, state militias were no longer critical for national defense due to the professionalization of the U.S. military. However, exclusion from service was yet another area in which people of color in the North were not treated as equals. Morris regularly petitioned the Massachusetts legislature to integrate the state’s militia. He also fought for equal participation in military service during the Civil War. Morris was gravely disappointed when the 54th Massachusetts Infantry Regiment, made up of Black soldiers, was sent to fight for the Union under the command of White officers.

“Some of the [militia] petitioners whom I have the honor to represent, can trace back their ancestry to a time long before an Englishman or any white foreigner stood upon American ground. Have we not hearts, and do not our hearts beat warm with love for the welfare and prosperity of our common country. Have we not patriotic aspirations—don’t we feel happy in the prosperity and rapid progress of our country—is not this ‘our own, our native land’?” 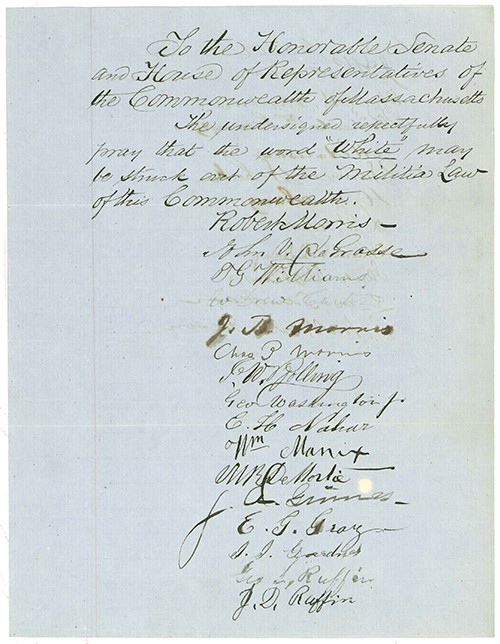 Morris wrote and circulated multiple petitions urging the Massachusetts legislature to integrate the state’s militia. This example is also signed by Morris’s brothers Joseph and Charles and several other leaders in Boston’s African American community, including George Ruffin, the first black graduate of Harvard Law School, and John V. DeGrasse, who later was commissioned as a physician in the U.S. Army during the Civil War. 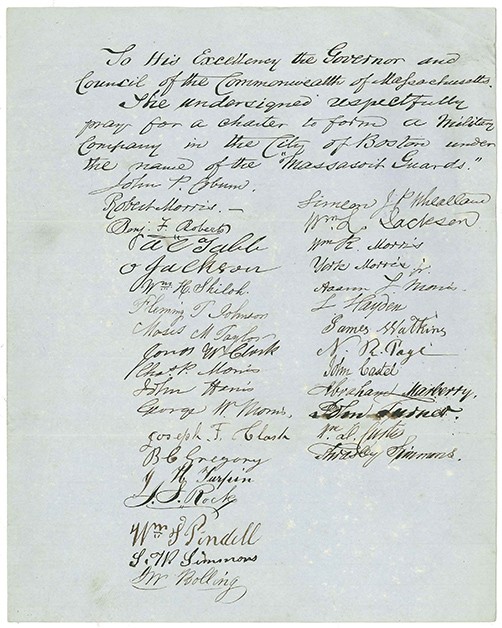 In tandem with his efforts to remove the word “white” from the state’s militia laws, Morris sought a legislative charter for an independent militia for soldiers of color called the “Massasoit Guards.” This appears to have been a pragmatic strategy, disappointing in contrast to achieving integration but at least allowing for some access and participation for people of color. This petition, in Morris’s hand and with his signature, was also signed by four of his siblings (William, Charles, George, and York) and other well-known Boston activists like Benjamin Roberts, John Sweat Rock, William Pindell (the plaintiff in another major school desegregation case), and Lewis Hayden.

Morris witnessed and endured discrimination on many different fronts and responded by fighting a multi-front war for full and equal rights. He battled segregated schools and militias. He endured the sting of prejudice when traveling by carriage or railroad, and protested segregated transportation, theaters, hotels, and similar public places. He challenged housing discrimination, speaking out publicly when racist homeowners derailed his purchase of a new family home, “carrying prejudice against color to its extreme extent.” He advocated for expansive voting rights. His political activism used different strategies to pursue this broad agenda of equality, and he worked with different allies towards common goals.

“[Morris] struck terrible blows at the exclusive school system for Negroes in Boston. He availed himself also of every opportunity that offered to annoy the railroad companies. He would go in person to theatres, lecture rooms, churches, and other public places, buy his ticket and force the employes [sic] to eject him, then he would carry the matter into the courts. In this way Mr. Morris succeeded in breaking up a barbarous custom of exclusion on account of color.” 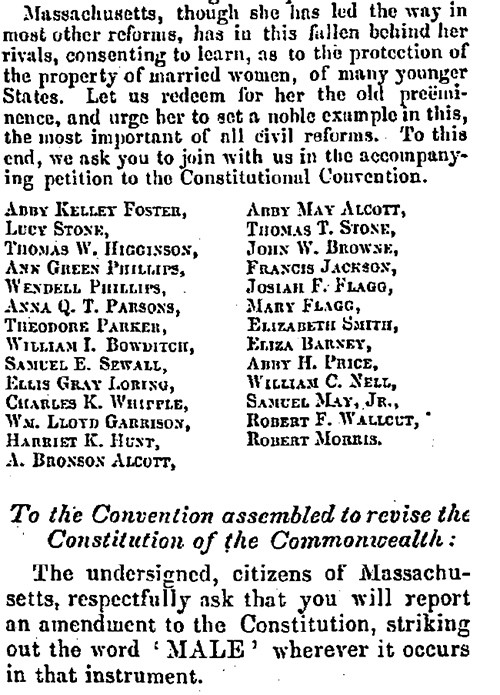 From The Liberator, "The Constitutional Convention and Equal Political Rights," March 4. 1853.

Morris signed onto this 1853 petition to strike the word “male” from the Massachusetts Constitution. The multiracial group of petitioners, including Morris, Lucy Stone, and William Lloyd Garrison, pushed for constitutional recognition of civil and political rights for women. This was a mere five years after the first women’s rights convention in Seneca Falls, New York. The all-male delegation at the 1853 Massachusetts Constitutional Convention refused to act upon the petition, but activists persisted for decades until the final ratification of the 19th Amendment in 1920.