Learning about terrorists can lead to more effective counterterrorism policy, BC researchers report.

Learning about terrorists reduces the hatred people feel for them, which can lead to more effective counterterrorism policy, according to a new study by Boston College researchers with expertise in psychology and political science.

Researchers and policy experts have determined that many of the emotional responses terror attacks provoke can undermine the implementation of effective counterterrorism policies. Anger and hatred, for example, can invite indiscriminate retaliation, whereas many of the greatest successes in counterterrorism have come from understanding terrorists’ personal and political motivations.

The Boston College research team set out to determine education’s potential ability to reduce extreme negative attitudes toward terrorists, specifically exploring the extent learning more about the causes, dynamics, and effects of terrorism could cause individuals to change their perceptions of terrorists, the threat they pose, and how to defeat them. 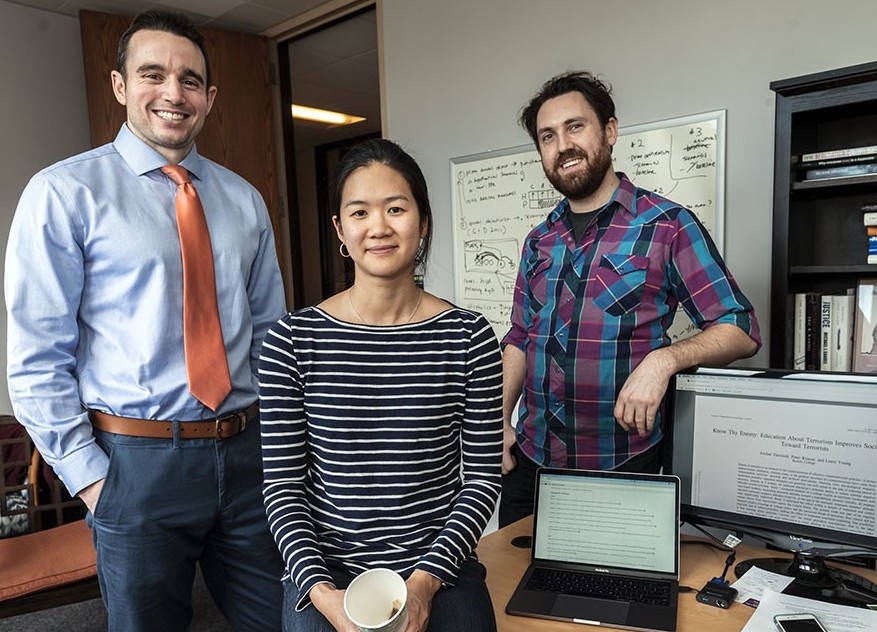 “Terrorism is often designed to generate hatred among its target population, in order to polarize communities and inspire indiscriminate backlash that increases support for the terrorists,” said Assistant Professor of Political Science Peter Krause, a co-author of the report. “When terrorists are perceived as inhuman and irrational, counterterrorism policy is often ineffective.”

Krause collaborated on the project with Associate Professor of Psychology Liane Young and psychology doctoral candidate Jordan Theriault, the lead author of the article, “Know Thy Enemy: Education About Terrorism Improves Social Attitudes Toward Terrorists,” which was published in the Journal of Experimental Psychology: General. The project was undertaken with funding from a Research Across Departments and Schools Grant from the Office of the Provost.

The researchers studied students before and after they took courses on terrorism to determine the impact of education on attitudes about terrorism and terrorists. They also surveyed students who did not take the courses.

Initially, all students reported extremely negative attitudes; however, at the end of the semester, the attitudes of students who took the courses were significantly improved.

“Learning about terrorists reduces the hatred people feel for them,” said Theriault, a researcher in Young’s Morality Lab at BC. “This does not mean that taking a counterterrorism course leads people to like or sympathize with terrorists, just that they don’t feel as strongly negative as they once did.”

According to Theriault, the research team was surprised to see the “clear effects” of education. “There is relatively little well-controlled research on the effects of education on prejudice reduction, and even less on its effects on attitudes toward extreme outgroups.”

Researchers concluded that student attitude change could be attributed to several factors. Students might learn that labeling groups “terrorists” can be politically motivated, making students question whether the label is properly applied.

The names of contemporary terrorist organizations, like Al Qaeda or ISIS, invoke a certain response, Theriault said. People often respond differently to groups like the Irish Republican Army or Weather Underground of the 1960s, which employed terror tactics but voiced different political aims and motives.

“When students begin class, ‘terrorist’ may call to mind only a few, highly negative ideas,” said Theriault. “As students learn more, the concept ‘terrorist’ should also call to mind much more. As ‘terrorist’ begins to call more ideas to mind – some of them negative, some neutral, a few positive – it may become more difficult to reflexively hate someone, simply based on their being called a terrorist. From a psychological standpoint, the label ‘terrorist’ comes to mean so much that it becomes less simple to have a quick, negative reaction to it.”

The researchers said that the findings about the power of education are promising.

Added Theriault: “Reducing hatred of terrorists would remove an obstacle to effective counterterrorism policy, but this work might also provide the basis for reducing extreme prejudice in other contexts, such as explicit racist beliefs.”