A vision for nursing

A Connell School prof's adaptation model is part of the education, practice, and research of nurses worldwide.

A half century ago, a nursing graduate student developed an idea that the goal of nursing practice was to promote patient adaptation. She theorized that a patient is a being of interrelated components—biological, psychological, social and spiritual—in constant interaction with a changing environment. The nurse’s role, she determined, is to help the patient adapt to the environment to bring about his or her best possible health.

Fast forward to the present day. That nursing theory—developed by Connell School of Nursing Professor and Nurse Theorist Callista Roy, C.S.J.—is now part of the education, practice, and research of nurses worldwide. 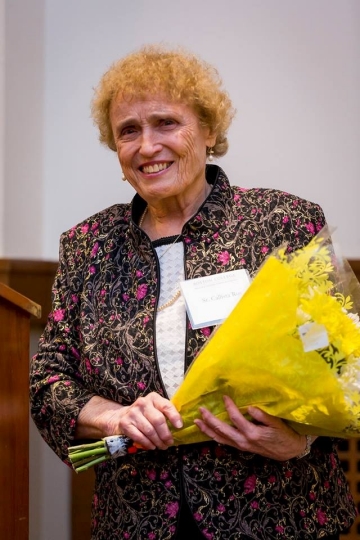 “Sr. Callista is one of the few Grand Nursing Theorists,” said Connell School Clinical Associate Professor Stacey Barone, who serves on the executive board of the Roy Adaptation Association. “Her work is one of the guiding forces to the development of the discipline of nursing, nursing practice, and nursing research and ultimately promoting optimal patient care. Her theory provides the framework for research and nursing care that looks at the whole person in a comprehensive matter.”

According to Barone, the Roy Adaptation Model can be applied in all settings (acute care, schools, clinics, etc.), all populations (pediatrics, adults, geriatrics, etc.), and all scales (individuals, communities, et. al.).

“If I had to pick one person in my life who has influenced me the most, it would be Sr. Callista,” said Barone, a clinical nurse specialist who has known Sr. Roy for almost 30 years, going back to the years when Barone was a Connell School doctoral student and Sr. Roy was her mentor. “She is a brilliant thinker. She thinks about the tiniest of details and the universe and can draw the connections. And she connects the dots in a way that is understandable to others. But beyond the professional pieces, what I admire is her kindness, her loyalty. She’s a hard worker and always there for her students. She’s such a good person. She lives the values of faith, love, and service to others in all she does.”

Sr. Roy is author of the Roy Adaptation Model and Generating Middle Range Theory: From Evidence to Practice, as well as other books and countless articles. She was named a “Living Legend” by the American Academy of Nursing and was inducted into the Sigma Theta Tau International Nurse Researcher Hall of Fame. She has also received five honorary doctoral degrees and the National League of Nursing Martha E. Rogers Award. She has spoken about nursing theory, research, curriculum, and clinical practice in more than 35 countries.

“As I look back over these 50 years I am filled with awe and gratitude for the gifts and blessings of my life, for the wonderful nurses I have met around the globe, and for the good that nurses do for humankind,” said Sr. Roy, who noted she was particularly grateful to have been able to celebrate with so many friends, faculty, Ph.D. alumni and former faculty from Boston College. “I look forward to what we will contribute in the future from what we learn about helping others deal with the changes in their lives in ways that lead to wholeness for individuals and for society.”

At a June 10 event marking the anniversaries, Barone, whose research is on the physiological and psychosocial adaptation of patients living with debilitating neurological and oncological illnesses, spoke about the impact the Roy Adaptation Model has had not only on her work but on research throughout the world.

Other speakers at the event included Burns Librarian and Associate University Librarian for Special Collections Christian Dupont, who oversees the Nursing Archives and the Mary Pekarski Memorial Nursing Archives, and Leorey N. Saligan, a principal investigator in the Symptom Management Branch Division of Intramural Research in the National Institute of Nursing Research, whose doctoral dissertation was a Roy Adaptation Model-based study of living with ocular sarcoidosis.