Anderson Destine with his mother, Judith, following his surgery.

When Anderson Destine of Haiti and his family celebrate his first birthday next month, a nurse at Boston College will mark the occasion too, knowing she played a vital role in helping Anderson reach that important milestone. 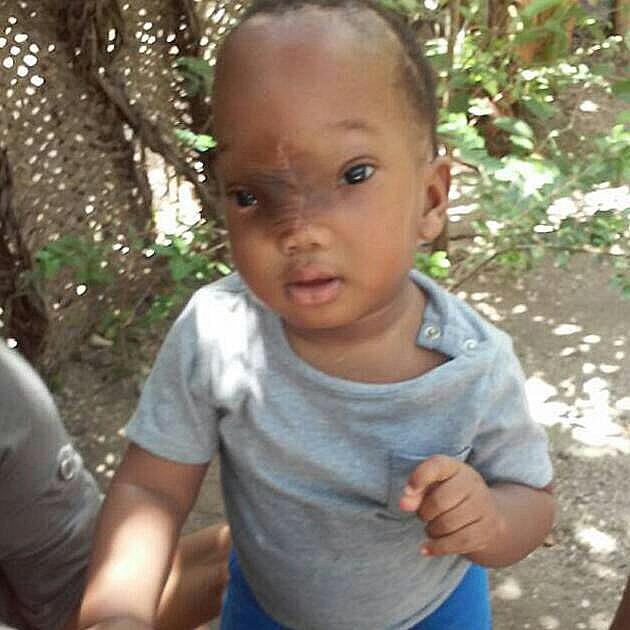 Anderson Destine, back home in Haiti after his surgery.

Anderson was born last October in Bellevue, Haiti with a rare skull defect that created a large sac on his face, composed of fluid buildup and herniation of the brain. What began as a small bump on his nose at birth grew to be nearly the size of his entire face months later. The sac was obscuring his vision and partially blocking his nasal passages, forcing Anderson’s mother Judith to spend nights lifting the sac off of Anderson’s face so he could breathe.

Untreated, Anderson’s condition would become fatal. Luckily, he would soon encounter BC nurses.

Last January, a team of Boston College nursing students, led by Connell School of Nursing Clinical Assistant Professor Donna Cullinan, were conducting their annual community health clinics in Haiti. Cullinan, Connell School undergraduates and graduate students, and a couple of alumni, spend a week in Haiti every year treating thousands of patients from sunrise to sunset in makeshift clinics in Leogane and surrounding areas.

Judith brought Anderson to the clinic. Immediately, the CSON-Haiti team knew they had an extraordinary patient.

Untreated, Anderson's condition would become fatal. Luckily, he would soon encounter BC nurses. 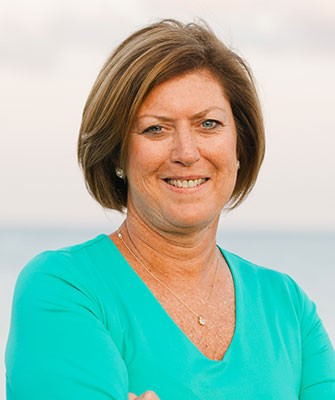 Donna Cullinan of the Connell School of Nursing

The first step was to arrange for an MRI for Anderson—not a simple task in one of the poorest places on the planet. Now back in the U.S., Cullinan and Anne Zlevor, a family nurse practitioner and BC alumna who was part of the CSON-Haiti team, paid for the MRI from their own funds and contributions from family and friends. Watson Drouillard, a local engineering student who has a longstanding relationship as a translator for the CSON-Haiti team, volunteered to escort Judith and Anderson to Port-au-Prince for the MRI.

Once Anderson’s diagnosis was determined, Cullinan and Zlevor knew he would not be able to be treated in Haiti. He would need to come to the United States.

Cullinan and Zlevor reached out to the medical community and finally connected with Calvin Babcock, chairman of the board of Baptist Hospital of Miami and CFO of Living Hope Haiti Christian Mission, a nonprofit organization that serves people in northern Haiti. Babcock made the connection to Dr. Vitaly Siomin, a neurosurgeon and medical director of the Brain Tumor Program at Baptist Health Neuroscience Center, who agreed to take the case pro bono.

Cullinan and Zlevor worked with Drouillard to obtain passports and visas for Judith and Anderson and arranged for the flight to Miami.

Dr. Siomin and his team from Baptist Heath South Florida removed Anderson’s facial defect in a life-saving surgery on June 26. In July, they installed a shunt, a permanent device to drain fluids from the affected area. Cullinan and Zlevor were in constant contact with the medical team and Judith.

According to Cullinan, Anderson will need plastic surgery and follow-up care but should go on to lead a normal life. “He certainly would have died without the surgery,” she said.

“I feel like it was a miracle,” she added. “He really touched my heart.”

Judith is extremely grateful for all the care her son has received. In an interview with a TV station in Florida, she tearfully recalled how she had been told to abandon her baby.

“I am full of joy,” she said. “I always believed my baby would be saved.”

Judith and Anderson are now back in Haiti, reunited with Anderson’s father Makeson Destine and big sister Judiemarlie. Cullinan is arranging for Anderson to be seen by a neurologist in Haiti so he can have a baseline established. She is looking forward to reuniting with Anderson and the Destine family when the CSON-Haiti group returns in January.

Cullinan’s intervention in Anderson’s case has been described as heartwarming and inspiring, but it is not at all surprising to those familiar with Cullinan’s connection and dedication to the people of Haiti.

Cullinan, who is a BC alumna, has been regularly traveling to Haiti to provide nursing care since 2002. She often cites Dr. Paul Farmer, a cofounder of Partners in Health known for his humanitarian work in Haiti and other areas, as an inspiration.

Said Cullinan, “I always keep in mind Paul Farmer’s quote ‘The idea that some lives matter less is the root of all that is wrong with the world.’”

She established the CSON-Haiti community health trip in 2011 as a way to expose the next generation of nurses to the situation in Haiti. In addition to the thousands of patients they treat, the CSON-Haiti team visits orphanages in the areas and delivers extensive amounts of supplies. Cullinan strives to build a sustainable health care delivery system in rural Haiti. She and her nursing students have taught and supported students at Faculte Des Sciences Infirmiere, the nursing school in Leogane.

Cullinan was honored by Boston College in 2011 with the University’s Community Service Award for her outreach to Haiti.

“I really believe we are here for others,” she said.

Story: Donna Cullinan is awarded 2011 Community Service Award from BC