Associate Professor of Mathematics Eli Grigsby receives one of the highest research honors bestowed by the U.S. government.

Boston College Associate Professor of Mathematics J. Elisenda Grigsby has been named a recipient of a Presidential Early Career Award for Scientists and Engineers, the highest honor bestowed by the United States government on science and engineering professionals in the early stages of their independent research careers. Grigsby, one of 105 researchers named by President Obama on February 18, will receive her award at a Washington, D.C. ceremony this spring. 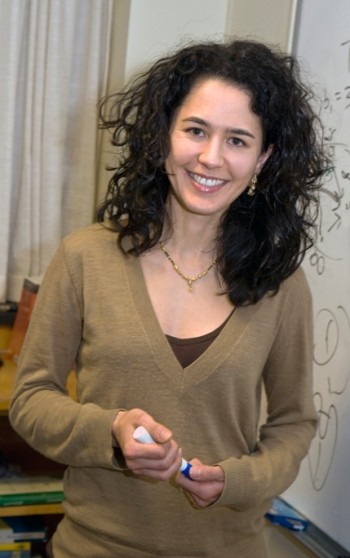 “These early-career scientists are leading the way in our efforts to confront and understand challenges from climate change to our health and wellness,” President Obama said in a press release issued by the White House. “We congratulate these accomplished individuals and encourage them to continue to serve as an example of the incredible promise and ingenuity of the American people.”

Federal departments and agencies join together annually to nominate the most deserving  scientists and engineers whose early accomplishments show the greatest promise for assuring America’s preeminence in science and engineering and contributing to the awarding agencies' missions.

Grigsby was honored for her research on behalf of the National Science Foundation.

McIntyre Professor of Mathematics Solomon Friedberg, department chairman, praised Grigsby as a most deserving recipient of this honor. “Eli, a key member of our topology and geometry group, is doing outstanding scholarship, is a devoted and successful teacher at all levels, and is a tremendous contributor to the department, “ said Friedberg. “ She is an intellectual and professional leader.  I am delighted to see her contributions recognized by this award.”

“Obviously, it is a dream come true to be recognized by the President,” said Grigsby. “I am thrilled I will have the opportunity to meet the other awardees and learn firsthand about their work. I hope it will give me a better perspective on what my own research priorities should be, moving forward.”

The Presidential Early Career Awards highlight the key role that the Administration places in encouraging and accelerating American innovation to tackle the nation’s greatest challenges, according to the release. This year’s recipients are employed or funded by departments and agencies ranging from the Department of Agriculture to the National Aeronautics and Space Administration.

The awards, established by President Clinton in 1996, are coordinated by the Office of Science and Technology Policy within the Executive Office of the President. Awardees are selected for their pursuit of innovative research at the frontiers of science and technology and their commitment to community service as demonstrated through scientific leadership, public education, or community outreach.

In 2015, Grigsby was the inaugural recipient of the AWM-Joan and Joseph Birman Research Prize in Topology and Geometry, awarded by the Association for Women in Mathematics for her “pioneering and influential contributions."  In 2012, she received a CAREER award, the National Science Foundation’s most important prize for early-career faculty.

Grigsby, who teaches courses in linear algebra, advanced calculus and algebraic topology, holds an undergraduate degree in mathematics from Harvard University and a doctorate from the University of California-Berkeley. Prior to joining the University in 2009, she was an NSF Postdoctoral Fellow at Columbia University and held a position at the Mathematical Sciences Research Institute.

BC Department of Mathematics