Mathematics' Eli Grigsby is recognized for her recent research and future scholarship potential.

Associate Professor of Mathematics J. Elisenda Grigsby—who earlier this year was named a recipient of a Presidential Early Career Award for Scientists and Engineers—has been awarded a 2016 Simons Foundation Fellowship, granted to accomplished faculty for their recent research and the potential impact of their future work.

The fellowships are part of the New York-based Simons Foundation’s efforts to advance the frontiers of research in mathematics, theoretical physics and theoretical computer science. Grigsby is an expert in low-dimensional topology, which examines the fundamental properties of shapes in space. 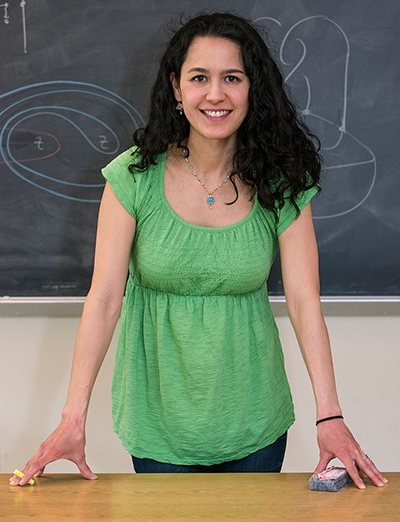 “It’s extremely exciting,” said Grigsby, who joined the BC faculty in 2009. “This award is particularly important to me at this point in my career because it gives me the time to take my expertise to new levels and learn deeply in new areas of mathematics. I’m grateful for the opportunity to expand my horizons in that way.”

The Simons Foundation fellows programs provide funds to faculty to extend their sabbaticals for up to a semester.  Grigsby said the award will support attending the Newton Institute at Cambridge University (U.K.), where experts work and learn in collaboration with peers, doing mathematics and exploring the leading issues in the discipline during the course of a semester.

Grigsby is the fourth Boston College Mathematics faculty member to receive a Simons Fellowship in the last four years, joining Professors Tao Li (2015), Martin Bridgeman (2013) and G. Robert Meyerhoff (2012).“This latest honor for Eli is an indication of how much she has achieved as a scholar and the high regard that mathematicians have for her scholarship to date and future research potential,” said McIntyre Professor of Mathematics Solomon Friedberg, department chairman.

“I would also add that her teaching and departmental contributions are at the same level; such as her work with the BC Math Society and her summer research with undergraduates, which make an important difference to our students.  I warmly congratulate Eli on her well-deserved Simons Fellowship.”

Grigsby said the Mathematics Department and BC have helped young faculty to establish themselves as both teachers and researchers.

“The department has always been incredibly supportive of me and other young faculty and that is a huge part of why we are seeing so much success,” said Grigsby. “It is definitely a very exciting place to be.”

In addition to receiving the Simons Fellowship, Grigsby will be one of 105 researchers to be honored at the White House in early May with a Presidential Early Career Award for Scientists and Engineers. The Association for Women in Mathematics and the National Science Foundation have also recognized her work.

Grigsby, who teaches courses in linear algebra, advanced calculus and algebraic topology, holds an undergraduate degree in mathematics from Harvard University and a doctorate from the University of California-Berkeley. Prior to joining the University in 2009, she was an NSF Postdoctoral Fellow at Columbia University and held a position at the Mathematical Sciences Research Institute.