BC's Woods College will provide all leadership and organizational training for participants in the U.S.-Latin American Sisters Exchange Program

​A comprehensive leadership training program for 36 Latin American women religious, developed by Boston College's Woods College of Advancing Studies and conducted entirely in Spanish, was, according to one participant, “a gift from God.”

The program, held earlier this year, was arranged by Catholic Extension through a grant from the Conrad N. Hilton Foundation, in partnership with Boston College, as part of the U.S.-Latin American Sisters Exchange Program. Since its founding in 1905, Catholic Extension has contributed more than $500 million ($1.2 billion in today’s dollars) to poor mission dioceses throughout the U.S.

The women religious are missionaries from Latin America who arrived in 2014 to begin the five-year program and are now serving poor, Hispanic immigrant communities in 12 U.S. dioceses. As part of the program, BC and other higher education partners provide for-credit courses that can be applied toward a future degree. When they complete the program, the participants will return home to help evangelize those on the margins, and raise awareness about religious life in their respective communities.

The success of the January pilot session at Boston College resulted in the determination by Catholic Extension at its March board meeting to center all of the operational leadership and organizational development training for the program at the Woods College. The first cohort of women religious will return to BC in 2018 for a second leadership curriculum; two additional cohorts will follow.

Catholic Extension has enjoyed a variety of previous partnerships with Boston College, such as with the University's School of Theology and Ministry, in support of the education of Church leaders from around the country working in “mission dioceses," said Catholic Extension President Rev. Jack Wall. Chicago archbishop Cardinal Blase Cupich H'15, head of Catholic Extension's board of governors, brought the educational needs of the newly arrived women religious to the attention of BC President William P. Leahy, S.J., when the cardinal spoke at the University's Commencement in 2015.

"We were pleased to be asked by Fr. Leahy to begin a conversation with Catholic Extension about the ways in which BC could begin to work with the Sisters Initiative," said Woods College Dean James Burns, I.V.D. A meeting of the Woods College senior leadership, he said, concluded that the school could provide the most benefit to the women religious through a program of organizational development and leadership studies.

"We were truly pleased with the results, and the potential for future collaboration, which has now been realized," said Fr. Burns. In particular, he said, "the opportunity to conduct the program entirely in Spanish—a first at Boston College—was evidence of our educational mission and outreach."

"This is such meaningful, compelling work," added Hiles, who is now developing a full five year degree program for the women religious, in collaboration with Catholic Extension. "It's incredibly exciting to be a part of it."

"Catholic Extension was so humbled by the time, thought, and resources the Woods College invested to create a world-class educational experience for these sisters," said Fr. Wall, who noted that the pilot week's itinerary also included extracurricular activities, such as courtside seats at a BC basketball game, a liturgy with Boston archbishop Cardinal Sean O'Malley, and the chance to enjoy a weather phenomenon unknown to many of the women: snow.

"Here, we are learning about leadership, intercultural skills, marketing, management, and how to request funding – loans – for the big projects. We feel much empowered. You can’t be a good pastor or religious leader without tools.  And I have found these tools in these courses.”—Sister Margarita Morales of Chiapas, Mexico 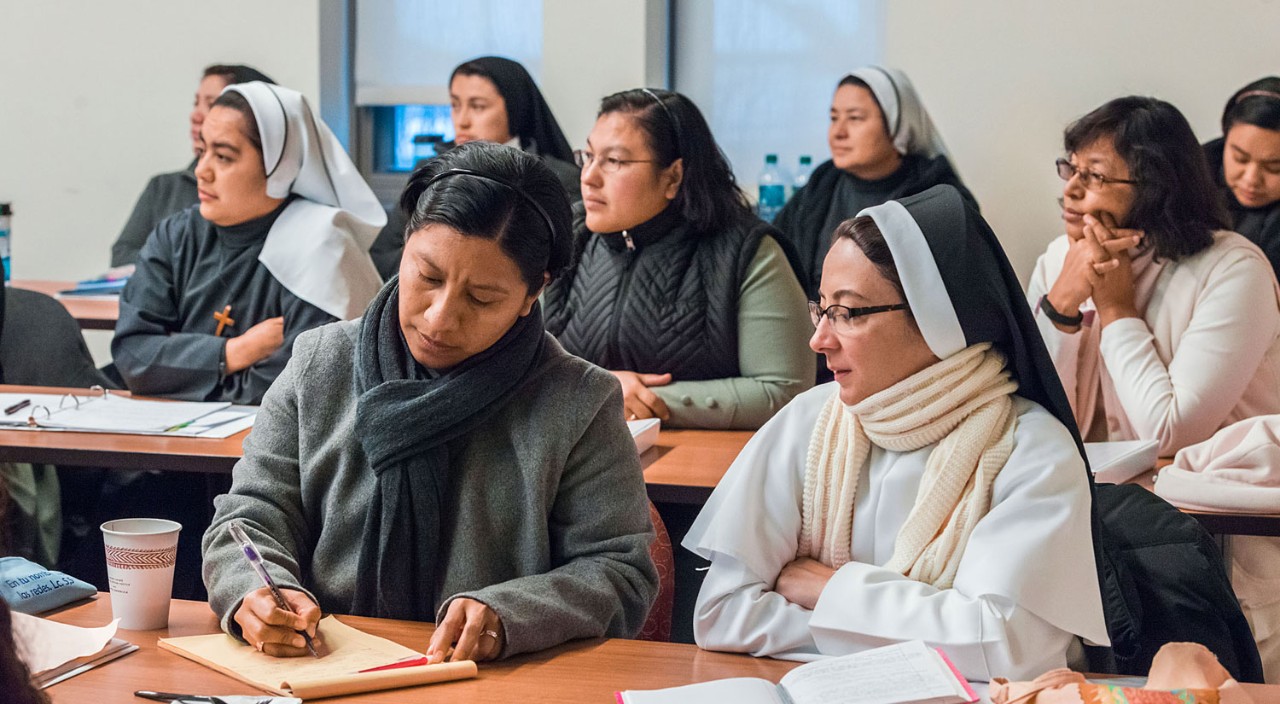 Many women religious from Latin America do not have the chance to study at the university level, according to Fr. Wall. "Coming to study at a premier Catholic university like Boston College is a dream come true for them," he said. "Our hope is that many of these sisters will eventually develop into future leaders for their congregation, as they grow in knowledge and gain missionary experience during their time in the U.S."

For Sister Margarita Morales of Chiapas, Mexico, from the Disciples of Jesus the Good Shepard, the opportunity to network and broaden her education was “a gift from God.”

Sister Morales, interviewed during the Woods College program, said, “I really enjoy being with my fellow sisters from all over the United States and Latin America. Taking the course and learning all these things together and collaborating with one another has given me confidence, skills and tools to be able to use when we return to our communities.

“There’s one phrase that resonates with me – knowledge takes away fear and leads you towards compassion."

"Coming to study at a premier Catholic university like Boston College is a dream come true for them...Catholic Extension was so humbled by the time, thought, and resources the Woods College invested to create a world-class educational experience."—Rev. Jack Wall, president of Catholic Extension 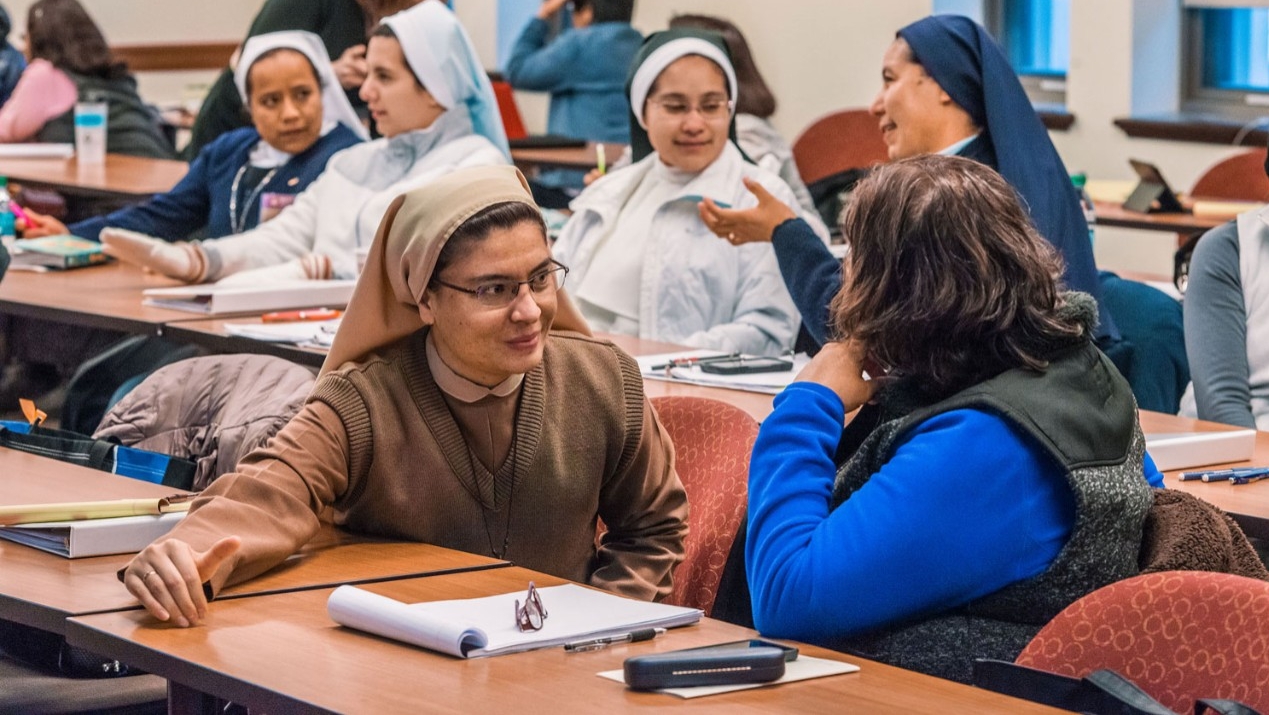 Many women religious from Latin America do not have the chance to study at the university level, according to Catholic Extension President Rev. Jack Wall. (Gary Wayne Gilbert)

“It has been marvelous because of the people I’ve met, the friendliness, the warmth – I feel that I’ve been part of a family. People [at the Woods College] were just ready to welcome me and embrace me within their own family.

“I’m better ready to serve my community once we are finished,” Sr. DeLoera said.

Sister Morales, who is currently working in the Charleston, SC, diocese, concurred. “I’ve taken many classes in religious education, so they have been of a pastoral nature – theology, Christianity, how to be a good pastor in your church,” she said. “But here, we are learning about leadership, intercultural skills, marketing, management, and how to request funding – loans – for the big projects.

“We feel much empowered. You can’t be a good pastor or religious leader without tools.  And I have found these tools in these courses.” 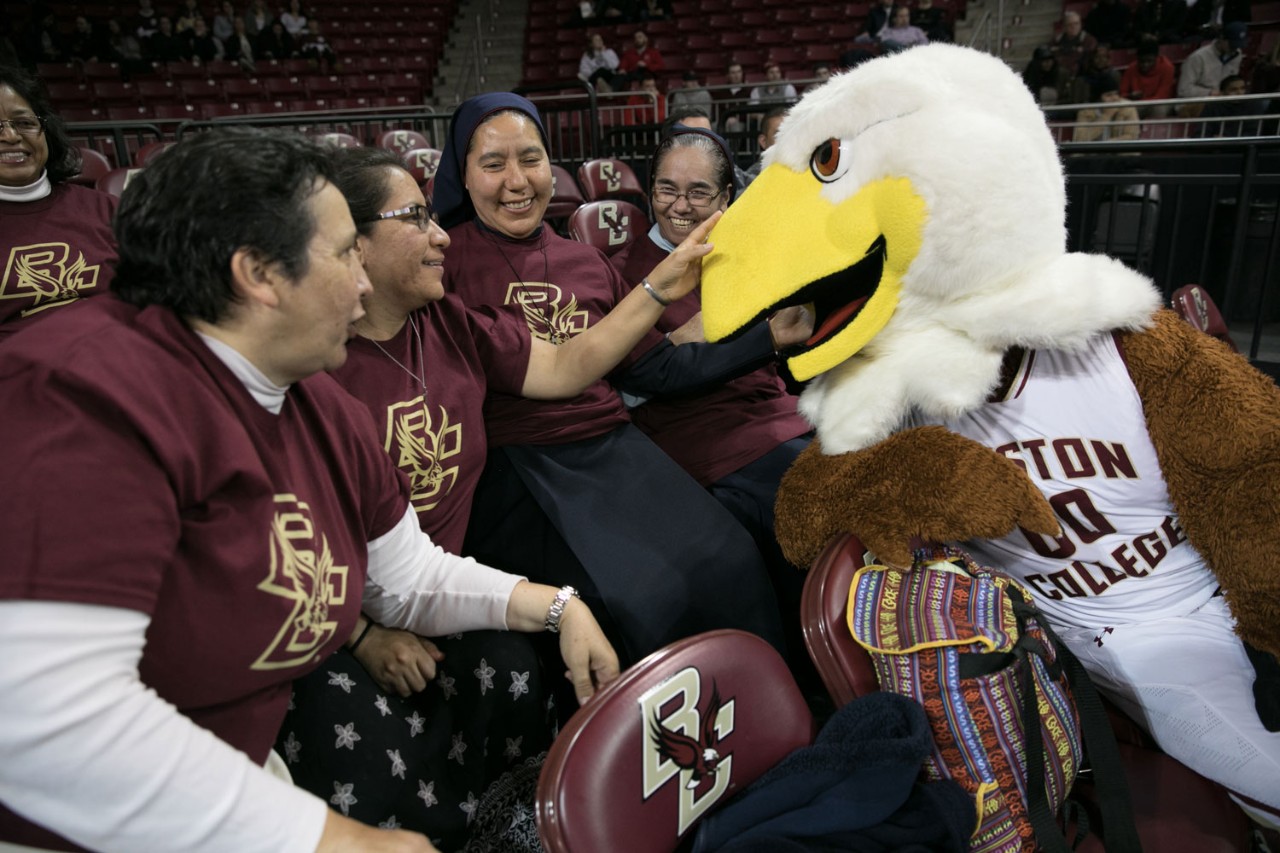 In addition to attending classes and participating in discussions and team-building exercises, the women religious also had time for fun during their week at BC, including courtside seats at a basketball game—and some personal attention from BC's mascot, Baldwin. (Rich Kalonik/Catholic Extension)

Sister DeLoera, who has a degree in social work, said the coursework added a further dimension beyond the practical and pragmatic.

“It’s helping me learn the American mentality, and part of that is the ability and the drive to dream and dream big, to have a vision,” said Sister DeLoera, who is now stationed in Little Rock, Ark. “To have these tools that I can use to achieve these goals is very exciting.”

Overall the women religious felt that the program was both inspirational and transformational.  One said that she felt “empowered” by the classes and that she “feels more confident in her ministry,” after attending the Woods College course in operational leadership.

The skills they've learned will be used to enhance an already vibrant ministry, said. Fr. Wall, who noted that the women are making an enormous impact in their dioceses. Deployed in groups of three, they minister in under-served areas, among the economically poor and in largely immigrant communities, where there are many Catholics but often little formal presence of the Church, he said. In California, four of the women have visited more than 3,000 residences in the area; in Michigan, a group of three collectively visit 300 migrant camps each summer to be present to the workers and their families.

"All the sisters have done a tremendous job of raising the profile of religious life in their dioceses," he said.

Faculty members who taught in the Woods College-Catholic Extension program said they were impressed by both the initiative and its participants.

“I’m grateful for this wonderful opportunity to reconnect with Boston College, and to see what BC is doing to make this world a better place,” said Lauren Bent ’03, MA ’04, an associate professor of higher education at Regis College. “These sisters have inspired me. It has been a wonderful privilege to spend time with them and learn with them and from them. It’s been wonderful to be part of this experience.”

"I really feel blessed by having participating in this project," added Lynn McGovern ’75, a Merrimack College professor emerita who co-taught the leadership and intercultural competence course with Bent. "What we could not have anticipated was the love and generosity of these sisters. They are open, they’re warm, they’re giving, they’re always willing to give the benefit of the doubt and they are very positive. They renewed my hope in humanity. It’s touched me a very deep way." 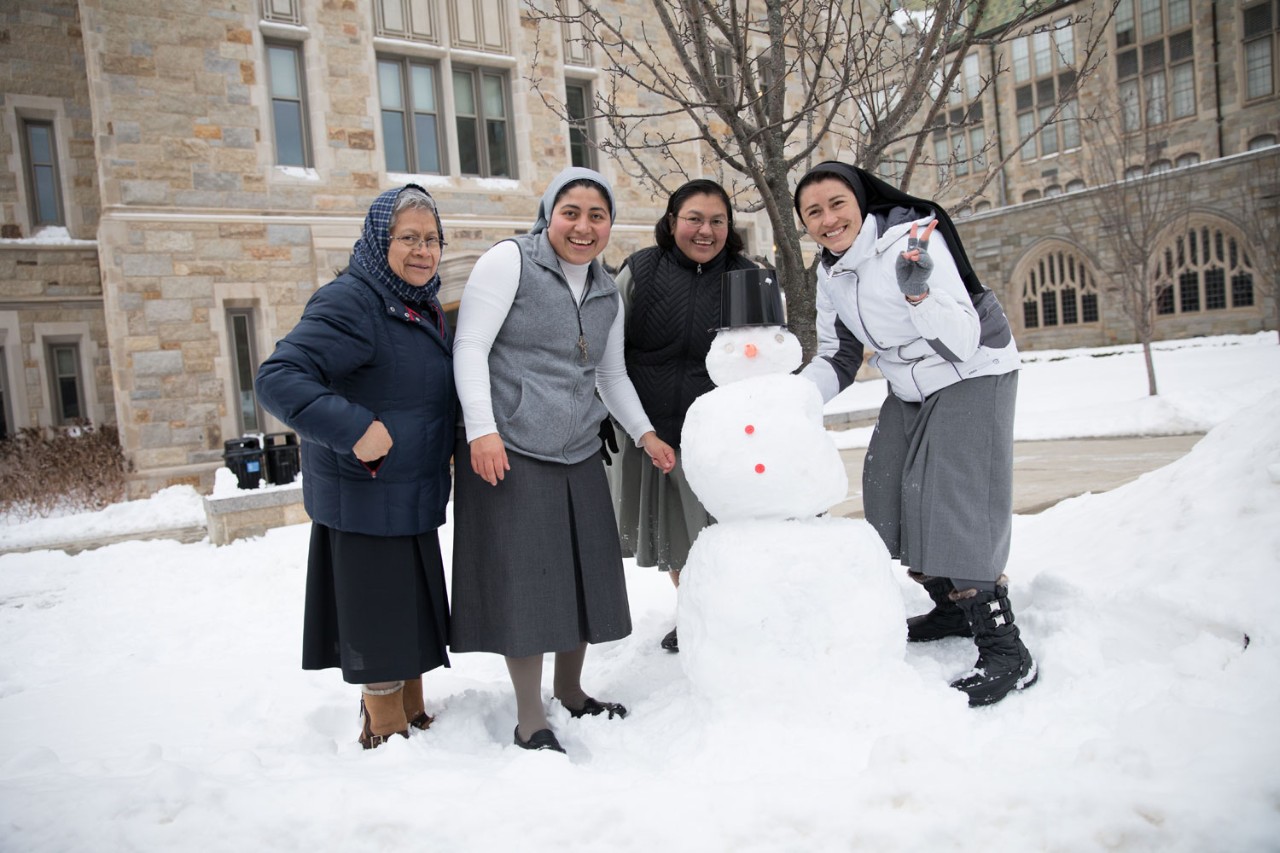 A snowfall during their stay on campus delighted the women religious, many of whom had never experienced snow before. (Rich Kalonik/Catholic Extension)