The young man on the video screen, his features and voice slightly distorted in the video feed, introduced himself to the Boston College students as Rami. He had lived most of his 19 years in the city of Mosul, he told them, but is now more than 50 miles away from home at the Harsham refugee camp near Erbil in the Kurdistan region of Iraq.

The conversation was among some two dozen that took place over four days earlier this month when—as part of its observance of International Education Week—BC hosted the Refugee Portal, a shipping container converted into a videoconferencing chamber where students, faculty and administrators spoke with Iraqi, Kurdish and Syrian refugees on various topics—including music.

Music, Rami told the BC students, has helped to sustain him during his three years at Harsham, where he had gone with his mother and two sisters to escape the ISIS invasion. He described himself as an aspiring DJ, songwriter and rapper, and presented some of his compositions, singing and rapping—alternately in Arabic, English and, on one occasion, —along to the tracks he had posted on his YouTube channel.

The students applauded enthusiastically to each, and Rami reciprocated when one of them, sophomore Rachel Drew, sang Brandi Carlisle's "That Wasn't Me."

Rami said one of his songs was a call-out to the world not to turn its face away from refugees in Harsham or elsewhere, he explained; another was an exhortation to rebuild now-liberated Mosul and begin a new era. Then there was the song he'd written for a friend, upset because his girlfriend had left him; the friend had asked Rami to write a song that would bring her back.

"It worked!" said Rami, with a smile.

Reflecting on the session, Drew said, "With all the complexities of what is happening in Iraq, it is very easy to overlook the simple statement of, as Rami put it, they "just want peace," they just "want the war to end."

"His song was really powerful in that he brought that fact back to the forefront of my mind—often very easy to forget with the media constantly portraying these conflicts as an 'us vs. them' situation, without any regard for the innocent civilians who just want peace."

The portal, one of several dozen designed by Shared Studios and made available around the world, was set up near the Higgins Stairs. From outside, it looked like any other shipping container one might see at a port or warehouse. But the interior was upholstered, and a video screen took up the entire back wall, providing most of the illumination in the space; the portals from where the refugees spoke had similarly spare, darkened interiors (some had been set up inside existing structures). 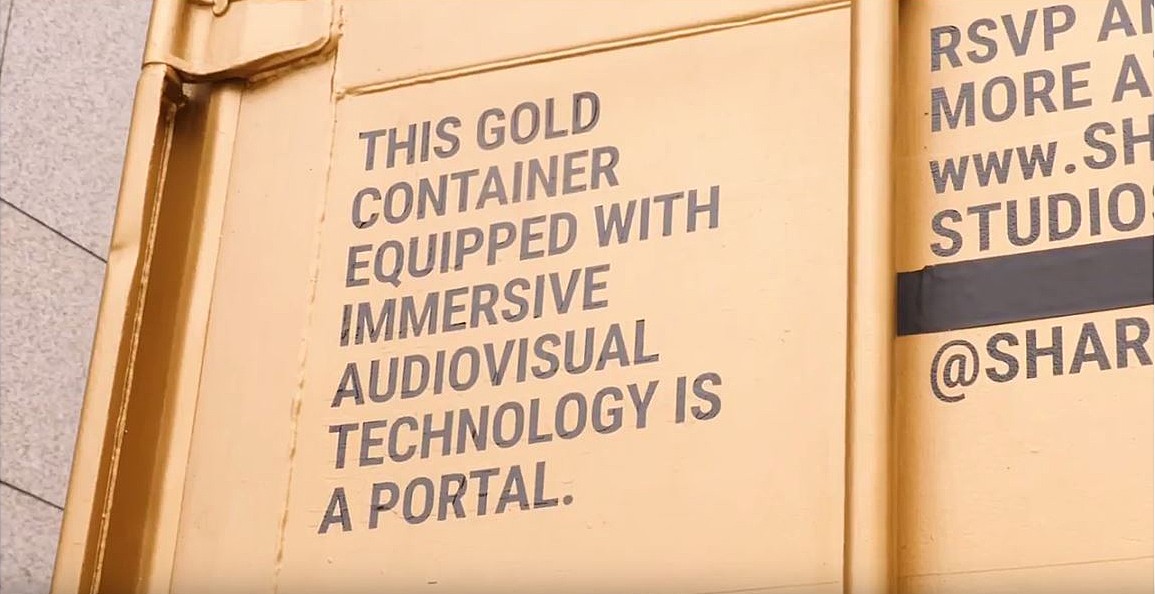 A Boston College Minute: As part of its observance of International Education Week, Boston College hosted the Refugee Portal, a shipping container converted into a videoconferencing chamber where students, faculty, and administrators spoke with refugees and other displaced persons from the Middle East. BC students Lauren Berman '18, Adam French '20, Mohammed Moro '18, and Hannah Winner '19 spoke with soccer enthusiasts in Erbil, Iraq. Ken Orgot, S.J., a graduate student at the School of Theology and Ministry, acted as curator for the Boston side of the portal, in conjunction with Rami Khalaf in Iraq. (Video by Ravi Jain, with additional cinematography by John Walsh, of University Communications.)

With such little visual information in the portal—no glimpse of the BC campus or the refugee camp in the background— participants could focus on one another, BC organizers said, and not be subject to details that might distract or influence the interaction.

"Humbling" was how Michaela Simoneau '18 described her time in the portal with Rami. "I think I went in with some visions about how extraordinary of an experience it was going to be, and while I did have an incredible time, the conversations I participated in were very ordinary, if we removed the context.

"It was a good reminder that as much as we sensationalize the global refugee crisis, behind the horrors of the situation the people behind the politics are just regular people, with passions, interests, and dreams just like those of us on the BC campus."

In organizing the portal sessions, Erik Owens, associate director of the Boisi Center for Religion and American Public Life, followed a set of guidelines prepared by international organizations that deal with refugee issues. Participants were required to register in advance, and urged to read and view provided materials to familiarize themselves with the refugee crisis. Session groups were limited to usually a half-dozen or fewer people each. Ken Ogot, S.J., a graduate student in the School of Theology and Ministry, helped to curate and facilitate a number of sessions.

The guidelines also encouraged conversations to touch more on everyday interests and activities, as a means for participants to find common ground. Some discussions were themed—on religious topics, family migration stories or music, for example—while others were more general. Representatives from the BC men's and women's soccer teams also took part in a "soccer clinic," depicted in the video above.

Professor of English Elizabeth Graver, a published novelist, unexpectedly found a kindred spirit during a portal session with Syrian refugees in Jordan. A young man named Yusef shared an excerpt (via a translator) from his novel; the passage concerned a man in a small black room writing stories for his far-distant lover. Graver told him about her work-in-progress, a story based on her family's experience as Turkish immigrants.

"I asked him what his hopes for the future were, and he said to write another book," said Graver. "It felt like a beautiful coincidence to be sitting in this dark box—much like the room in his story—and find a young writer across from me"

Among other topics, Volunteer and Service Learning Center Welles R. Crowther Director Daniel Ponsetto and his group discussed the teaching of Islam at BC with two members of a humanitarian organization in the Jordan camp. The two were impressed by the efforts of BC and other colleges and universities to fairly represent Islam, said Ponsetto, but from their perspective, most Americans have little understanding of the Middle East, of Islam, and how most Muslims live.

Ponsetto was struck by how Jordanians have displayed a general willingness to help refugees, even though the country has taken in a disproportionate number.

"There are realities that are difficult, as refugees are willing to take jobs that can displace Jordanians. However, the response of most, especially including many young Jordanians who volunteer their time in the camps, is very positive and hopeful."

From Erbil, Rami told the students that for him, "Music is light. Your life will be dark, maybe things won't be good. But music will make you intelligent; it will change your life." The BC students nodded approvingly, and talked about the place of music in their lives.

"I like playing piano for myself—if someone wanted to pay me, that would be on them," said Nicolas Thompson-Lleras '19, who had complimented Rami on his rapping ("You have a good flow"). "If I'm angry or stressed, music helps me. It's kind of like meditation."

Simoneau, a member of the Screaming Eagles Marching Band, took out her trombone and played "For Boston."

"You won't believe how many times I've done that song these past few years," she quipped. Turning more serious, she talked about her band experiences: "It's powerful to play with a lot of people who love music."

At the end of the session, Rami praised the students for their musical interest and skills.