In recent years, College Bound has expanded into the social justice sphere, enabling students to develop a better understanding of social issues and trends and their impact on populations and individuals alike.

This new direction was in evidence at College Bound’s 30th anniversary celebration this past spring, which included a daylong youth symposium focused on empowering students to become positive change agents in their schools and communities.

Among those speaking at the event was Nick Alicea, a graduating senior at Dorchester's Dr. William W. Henderson Inclusion School, who shared with anniversary attendees his experience of participation in the March 24 March for Our Lives in Washington, DC.

"The future is in our hands, and protesting gun violence and the faults of the Second Amendment shows that we have a voice in America," he declared. "I won't just stand for something; I will march for it. The youth of this nation are the key to the protection of the future generations."

Alicea's stirring remarks reflect the evolution of College Bound, which began in 1987 as a pilot program with a primary focus on providing disadvantaged high school students of color with mentoring and crucial enrichment skills so they could earn a four-year college degree.  Meeting on Saturdays, those who successfully completed the four-year College Bound program and met BC's admission standards were awarded a full-tuition scholarship to the Heights at the time.

"BC's commitment is not only financial," Lynch School of Education Professor George T. Ladd Jr., the program's first director, said in a 1988 Boston College Magazine interview. "We'll make sure that these students not only get in the door; we'll make sure they get out the door."

Ezra Jethro-Enedouwa, a graduate of the Urban Science Academy now studying at Boston's Wentworth Institute of Technology, was among those program alumni at the anniversary celebration reflecting on their College Bound experiences.

"I grew academically and individually in College Bound," said Jethro-Enedouwa, now serving as an alumni mentor for College Bound.  "It made me a better person than who I thought I was going to be."

College Bound still meets on Saturdays and concentrates on college and career guidance for a diverse group of Boston high school students from West Roxbury Academy, Brighton High School and Urban Science Academy. But its offerings now include participatory action research projects on violence in our communities; women and intersectionality; education and equity; and environmental justice with a food justice focus to include STEM-driven learning in hydroponic farming, solar energy and robotics.

"These interdisciplinary projects not only promote a college-going atmosphere for our College Bound students, but also encourage our youth to have a voice in issues of justice that are important to them," said Catherine Wong, director of the Lynch School of Education's Urban Outreach Initiatives, where College Bound resides. "We aim to recruit students who may not be at the top of their class, who may be struggling, who may be disengaged from school, and who don’t often get invited to participate in a pre-collegiate program such as this." 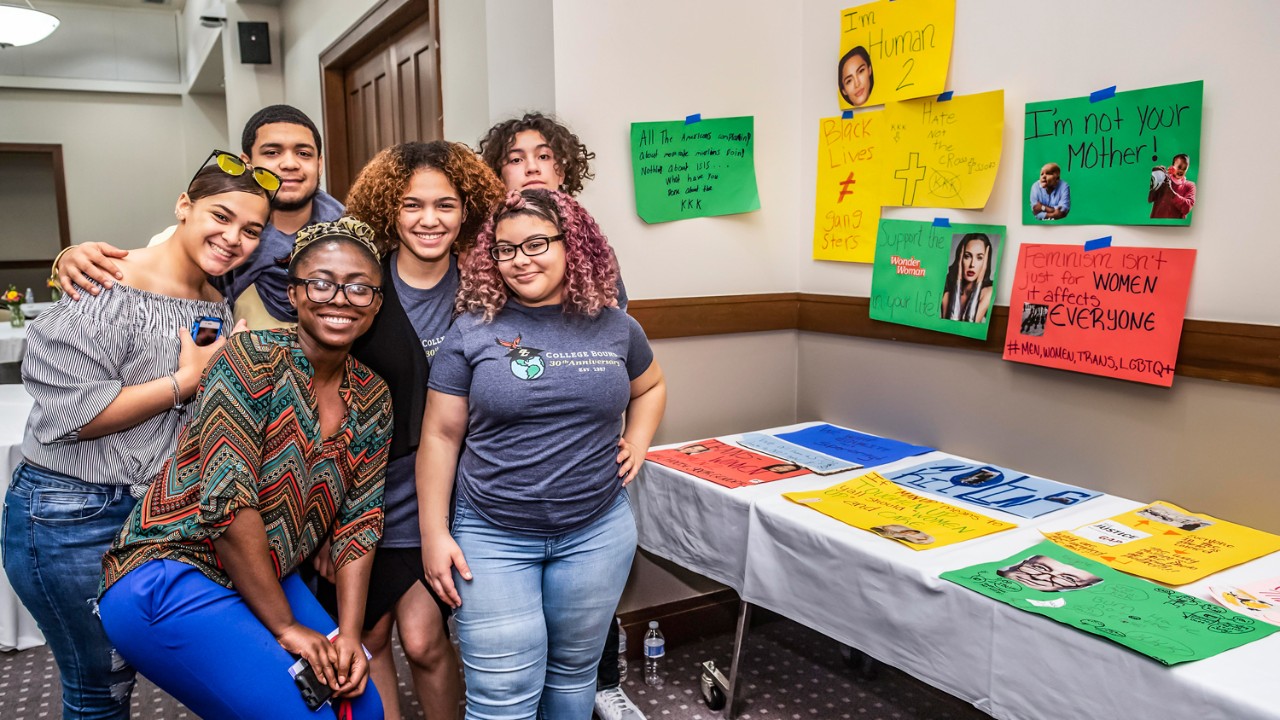 College Bound's roots were planted amidst controversy over the 1974 court-ordered busing of Boston Public Schools students from some of the city's most impoverished and racially segregated neighborhoods to achieve school desegregation. Part of the desegregation plan included a measure that linked local universities to "districts" within BPS with the goal of improving educational programs for those students.  BC began working with District 3/Area B, which included some 9,000 students from the communities of West Roxbury, Roslindale and part of Mattapan.

On behalf of BC, Ladd served as co-director of the planning team, along with BPS parents, teachers, administrators, students and BC faculty. The team determined that the district's most critical problem was the lack of services and resources for students with learning problems, and six programs were proposed to address the issue.

"We are trying to provide services that parents, teachers and administrators feel the kids need," said Ladd in a 1976 interview with The Heights.  "It's a collaborative effort, and there are many needs...We're trying to meet as many as possible within the funding limitations."

The combined 1975-76 academic year budget for BC's district work totaled just $216,000, recalled Ladd at the 30th anniversary celebration: "When the money ran out, and we left, so did the program."

But BC retained its BPS ties and established a new support program around the time control of the desegregation plan was transferred to the Boston School Committee. According to Ladd, College Bound was inspired by similar programs in New York City, which provided urban students with scholarships to state colleges and prep schools

But when College Bound sent its first cohort to college in fall 1992, with 15 of the 17 participants enrolling at BC, it had become far more than a tutoring program, according to Ladd.

"It's more involved with helping students reach their full potential...to form career aspirations, and [to] develop positive feelings about themselves," he told Boston College Magazine.

By 2001, more than 100 students had successfully transitioned from these Boston high schools to colleges, with 85 percent graduating in four years from BC, Boston University and Georgetown, among others, and proceeded to careers in education, medicine, business and social services.

“The growing success of the College Bound Program is due in large part to its interdisciplinary collaborative nature, and its emphasis on diversity and inclusion. Some of my proudest moments have come from seeing what can be created when you remove the hierarchal barriers, and allow teaching and learning to occur across the generations."

A $1 million grant from the Peter Jay Sharp Foundation – with half designated as an endowment for College Bound – was awarded in fall 2001.  Today, the Lynch School and National Science Foundation fund the program as well.

“The generous support from the NSF's Information Technology Experiences for Students and Teachers program has allowed College Bound to expand to the seventh and eighth grades," said Wong. "Early intervention in the college preparation and access process allows for deeper involvement with not just the students, but with their families, too.”

Under Wong's leadership, not only has College Bound broadened to help students learn about critical issues affecting their communities, it has bolstered its college and career preparation with programs, such as "College for a Night," “Friday Night Intensives" and "College/Career Roundtables," designed to demystify the university experience, provide guidance for financial aid applications, and expose participants to professions and professionals – many of whom are first-generation college students themselves.

“The growing success of the College Bound Program is due in large part to its interdisciplinary collaborative nature, and its emphasis on diversity and inclusion," said Wong. "Some of my proudest moments have come from seeing what can be created when you remove the hierarchal barriers, and allow teaching and learning to occur across the generations."