Our eyes naturally turn toward action, vibrant colors, and stimulating images and noises. But what if sounds could be used to help direct our eyes to certain colors?

New research by Boston College marketing professors finds the sensory match between sound frequency and color lightness could have broad implications for the use of sound to guide consumers’ visual attention, whether to elements of a particular advertisement or within a retail environment.

Listen to an interview with the researchers on NPR's 'Here and Now.'

While studies have shown a conceptual connection between sound frequency and color lightness, the researchers' paper “Cross-Modal Communication: Sound Frequency Influences Consumer Responses to Color Lightness,” published in the Journal of Marketing Research, is the first to show that this match automatically guides visual attention. 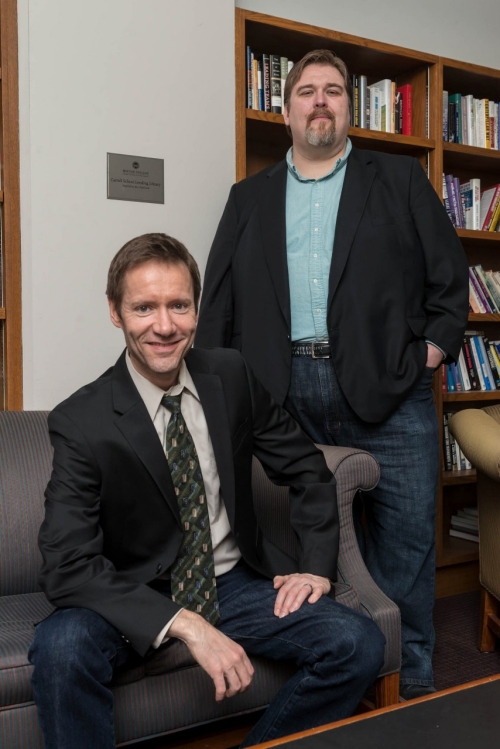 “This is interesting from both a cognitive psychology perspective and a practical marketing perspective,” says co-researcher Henrik Hagtvedt, associate professor of marketing at BC's Carroll School of Management.  “Marketers can subtly influence consumers’ visual attention by selectively exposing them to sound frequencies that match the color lightness of target objects.”

“We came at this from a number of different angles,” says co-researcher S. Adam Brasel, also an associate professor of marketing at the Carroll School. “Our eye-tracking data establishes the baseline effect, then we demonstrate downstream consequences in both commercial and retail environments.”

The effect occurred without the viewers’ awareness. In fact, it occurred even when participants were instructed to view elsewhere. When an audio tone was played, study participants would automatically look toward an object with matching color lightness, and only after a brief moment would they override that immediate response and look at the object they had been instructed to look at.

“Automatic attention effects of this kind might prove especially useful in that they do not rely on consumers’ conscious awareness,” according to the study.

“The results suggest that managers can use this effect to guide attention in the store...For example, they might nudge customers toward merchandise with high profit margins or products that are overstocked by playing music that guides people toward darker or lighter areas of the store, darker or lighter shelves, or darker or lighter packaging.”

A field study in a large supermarket highlighted some practical consequences of this effect. Bananas were placed on one shelf with white paper while other bananas were placed on a shelf with black paper. Two music tracks played at alternating 30-minute intervals, one at a high frequency and another at a low frequency. More bananas were purchased from the white shelf when high-frequency music played, and more were purchased from the black shelf when low-frequency music played.

“The results suggest that managers can use this effect to guide attention in the store,” says Hagtvedt. “For example, they might nudge customers toward merchandise with high profit margins or products that are overstocked by playing music that guides people toward darker or lighter areas of the store, darker or lighter shelves, or darker or lighter packaging.”

The Boston College researchers say this subtle form of influence not only goes beneath the threshold of consumer consciousness, but it can be applied to a wide variety of contexts – online, in stores, on television – wherever there is sound and color.

“This research doesn’t only pertain to what marketers are currently doing; it’s also revealing some new opportunities,” says Hagtvedt. “For example, there is currently intense competition for shelf space in retail outlets. The next step might be companies competing for the ambient soundtrack that fits their product offerings.”

“This doesn’t have to be difficult to implement,” says Brasel. “It’s not a huge new technology or a fundamental redesign of stores or commercials. This is about understanding how consumers process information.”

“Another question is whether such practices are good or bad for consumers,” adds Hagtvedt. “A subtle effect that operates beneath the threshold of consciousness might be seen as insidious or manipulative. On the other hand, it could be seen as a non-intrusive way to influence customers without bothering them. Either way, the effect itself is interesting.”