Professor of Philosophy Emeritus William Richardson, S.J., author of a groundbreaking study on renowned philosopher Martin Heidegger and a faculty member at Boston College for more than a quarter-century, died on Dec. 10 at the age of 96.

A funeral Mass for Fr. Richardson was held on December 14 at the Chapel of the Holy Spirit at Campion Center in Weston, Mass. 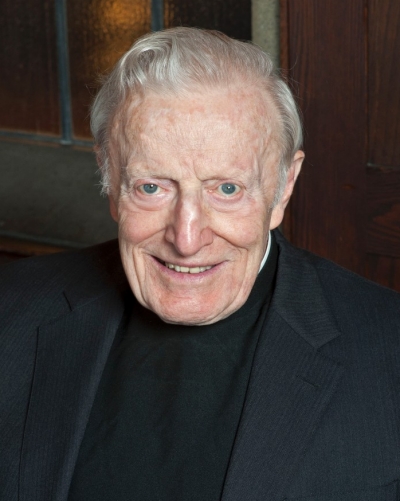 Fr. Richardson joined BC in 1981 as arguably the foremost American expert on Heidegger, a seminal thinker in the Continental tradition and philosophical hermeneutics whose Being and Time was regarded as a central philosophical work of the 20th century. In 1963, Fr. Richardson had published his nearly 800-page opus Heidegger: Through Phenomenology to Thought, which contradicted prevailing attitudes about Heidegger.

“Let it suffice to say that in disengaging the sense of foundational thought, we delineate Heidegger’s conception of philosophy as well,” wrote Fr. Richardson in the book’s introduction. “For there is only one philosophical question that interests him, the question about Being and its truth. This is the ‘one star’ – the only – that remains constant along the way. It is, one might think, the evening star that must have caught his eye when, in the gathering darkness of Reichenau, he watched the light go out of the west.”

In a 2010 Boston College Magazine profile on Fr. Richardson, writer William Bole explained that prior to Through Phenomenology to Thought, Heidegger was “treated as an existentialist, someone concerned exclusively with matters of human existence such as anxiety and authenticity.” But Fr. Richardson, he wrote, “revealed Heidegger as a philosopher of being as a whole, someone who probed the very ground or metaphysics of human existence and understanding.”

Fr. Richardson had not come to his assessment of Heidegger simply by reading the philosopher’s works or analyses by other scholars: He had once spoken with Heidegger for four hours at Heidegger’s home in Freiburg, Germany.

During a 2005 interview, Fr. Richardson recalled when he first approached Heidegger about his project. “I figured: ‘Well, what can I lose? He can’t resent my naiveté’...So I screwed up my courage to go speak to him and decided to go in and see him with my broken German. And he was very gracious to me. He could have just dismissed me but didn’t. He really treated me like a mensch, so to speak.”

In fact, Heidegger was quite impressed by his visitor, according to an intermediary, who told Fr. Richardson that after the interview Heidegger had remarked: “Who is this guy? He’s an American, and a Jesuit, and he got me right. Most Europeans get me wrong. How is this possible?” Heidegger wound up contributing the preface to Phenomenology to Thought.

An urban legend later surfaced that the philosopher had actually attended Fr. Richardson’s defense of his doctoral dissertation on Heidegger – and at one point stood up at the back of the lecture room and declared “I think he’s right.”

When asked about this during an interview for the Boston College Magazine story, Bole wrote that Fr. Richardson “chuckled and gave a knowing look. ‘You hold on to that,’ he suggested.”

After joining the BC faculty in 1981 – he had taught at Fordham University since 1964 – Fr. Richardson continued to teach, write and speak about Heidegger, as well as pioneering psychoanalyst and psychiatrist Jacques Lacan, whom he met on a couple of occasions. In 1982, Fr. Richardson – who in the 1970s had become a certified psychoanalyst and served as director of research at the Austin Riggs Institute for Psychotherapy – co-authored Lacan and Language: A Reader's Guide to the Ecrits.

Colleagues and friends remembered Fr. Richardson as a deeply thoughtful scholar who, while ever engaged in intellectual pursuits, never neglected his role as teacher and mentor.

Professor of Philosophy Arthur Madigan, S.J., spoke of Fr. Richardson’s “intellectual courage” in studying Heidegger and Lacan, as well as his “devotion to students – he would do anything in his power to help them, and they knew it.” Fr. Richardson, he added, also had a strong capacity “for deep and lasting friendship.”

Associate Professor of Philosophy Jeffrey Bloechl said Fr. Richardson’s scholarly work exemplified “what is best and most forceful in the Jesuit tradition, opening itself to even the most challenging intellectual and cultural developments, on the premise that there might well be something true and good in them, and if so, then they cannot be alien from the grace that defines Christian faith.  So likewise his teaching, which has touched generations of students with a vivid commitment to what the cura personalis truly means.”

Kraft Family Professor of Philosophy James Bernauer, S.J., said that Fr. Richardson was “very highly regarded by his graduate students, and many of them became his close friends.”  The two had met in Paris in 1980 when Fr. Bernauer was a graduate student and began spending time together, which afforded Fr. Bernauer an opportunity to see the informal, personal side of Fr. Richardson.

“We were walking around one evening,” said Fr. Bernauer, “and he said something to me at the time that shocked me: ‘Brains, brains, they are a dime a dozen.  But getting people to work together – that is a rare talent.’"

Given his brilliance, Fr. Richardson sometimes had a challenging time establishing a rapport with undergraduates, Fr. Bernauer said, “but he did try to reach them” by staying connected to popular culture: For example, he gave a lecture, "Towards an Ontology of Bob Dylan," later published in the BC journal Philosophy & Social Criticism.

Fr. Richardson retired in 2007 but continued to work as an emeritus faculty member. He moved to the Campion Center in 2012.

A native of Brooklyn, Fr. Richardson was a graduate of the College of the Holy Cross. He entered the Society of Jesus in 1941 at St. Andrew on Hudson in Poughkeepsie, NY, and went on to study at Woodstock College (Md.) and the University of Louvain in Louvain, Belgium. He was ordained in 1953 in Louvain.