Soon television audiences across the nation will have the chance to sit in on a class at Boston College.

A five-person crew from C-SPAN came to campus to film one of Professor Heather Cox Richardson’s classes, "Race, Riots, and Rodeos: America from the End of the Civil War to 1900," for its "Lectures in History" series. Richardson, the author of five books, is the first BC professor whose class has been documented by the national public service broadcaster.

“Almost everyone we tape for the 'Lectures in History' classroom series is recommended in one way or another, either by a fellow professor, or by a C-SPAN producer who saw the person at another event we covered and thought they were an interesting speaker,” says Russell Logan, C-SPAN’s producer for American History TV. "In Professor Richardson’s case, it was both." 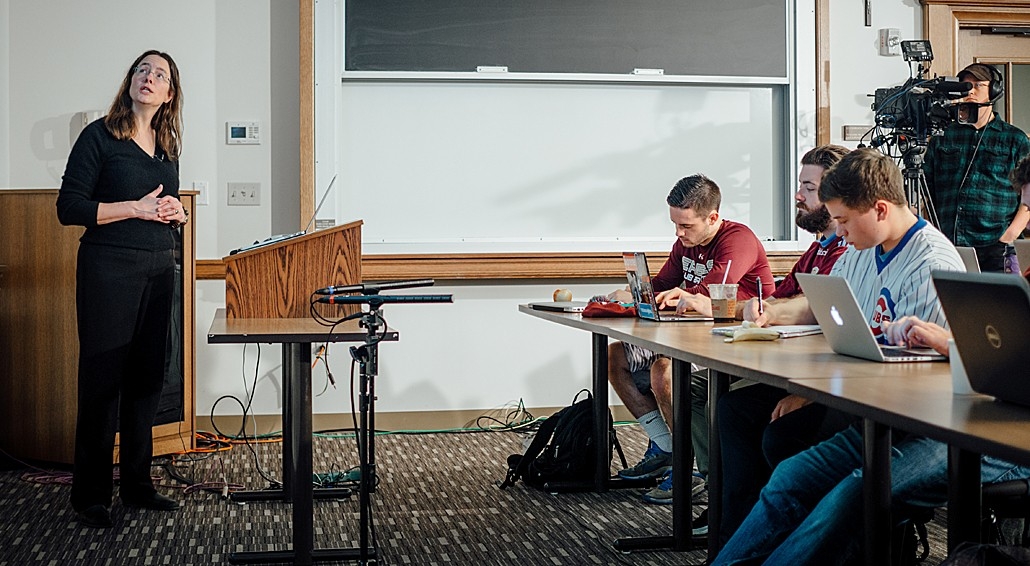 Audiences have responded positively to the “Lectures in History” series, which takes viewers inside college classrooms around the country every week to hear lectures on various American history topics, adds Logan. “Because these are real classes, they look and feel a bit different than many of our other programs, which are often talks or panels taped at public venues.”

“It’s always a pleasure to work with the wonderful folks at C-SPAN, and to have the chance to bring the great stories and patterns from American history to a larger audience,” says Richardson, who was last on C-SPAN discussing her latest book, To Make Men Free: A History of the Republican Party.

“We chose that particular lecture because years ago a student told me he had never before heard anything about the relationship between women’s suffrage, Reconstruction, and citizenship and asked me if I would someday talk about that in a setting where it could be put on the Internet for others. The C-SPAN project made that possible.”

The broadcast of Richardson’s April 12 class is scheduled to take place on July 2 on C-SPAN’s American History TV at 8 p.m. and midnight, and then throughout that weekend. It also will air at various times on C-SPAN 3.