Skip to main navigation Skip to main content
BC News > Faith & Religion > Jesuit, Catholic > 'Why I Remain a Catholic'
Channels

'Why I Remain A Catholic'

A panel of Boston College faculty and students discussed the strength of their Catholic faith at a time when crisis has enveloped the Catholic Church – in the U.S. and globally – because of its failure to respond decisively to a two-decades-old clergy sexual abuse scandal that continues to reveal a deep need for reform and reconciliation.

Alumnus and trustee R. Nicholas Burns moderated the panel, titled “Why I Remain a Catholic: Belief in a Time of Turmoil,” which drew approximately 500 people to Robsham Theater on November 27.

Sponsored by BC’s Church in the 21st Century (C21) Center, the program examined questions on the minds of many Catholics following reports from a Pennsylvania grand jury detailing decades of clergy sexual abuse, and the resignation of Cardinal Theodore E. McCarrick amid sexual abuse and harassment allegations.

Boston College President Rev. William P. Leahy, S.J., who launched the C21 initiative in the wake of the revelations of clergy sexual abuse nearly 20 years ago, welcomed the audience to a discussion about the dimensions of faith challenged, but also ways to help heal and, ultimately, strengthen Catholics and the Church.

“The Pennsylvania grand jury report earlier in the summer about decades-old cases of clerical sexual abuse, the alleged misconduct by former Archbishop McCarrick and the inability of the American hierarchy and Vatican officials to agree on new policies to address sexual abuse by priests and bishops have taken a serious toll on the Catholic community in our country, leaving too many Catholics hurt, angry, and questioning their continued involvement in the Church,” Fr. Leahy said.

He hoped the program would give those in attendance and those watching online the opportunity to “consider our connections with the Church and the Catholic community around us and how they might be strengthened. Certainly, our faith and sense of what it means to be a Catholic and part of the Church do not depend on one person or one event, but they have been and continue to be shaped by family, prayer, sacraments, relationships and service to others.” 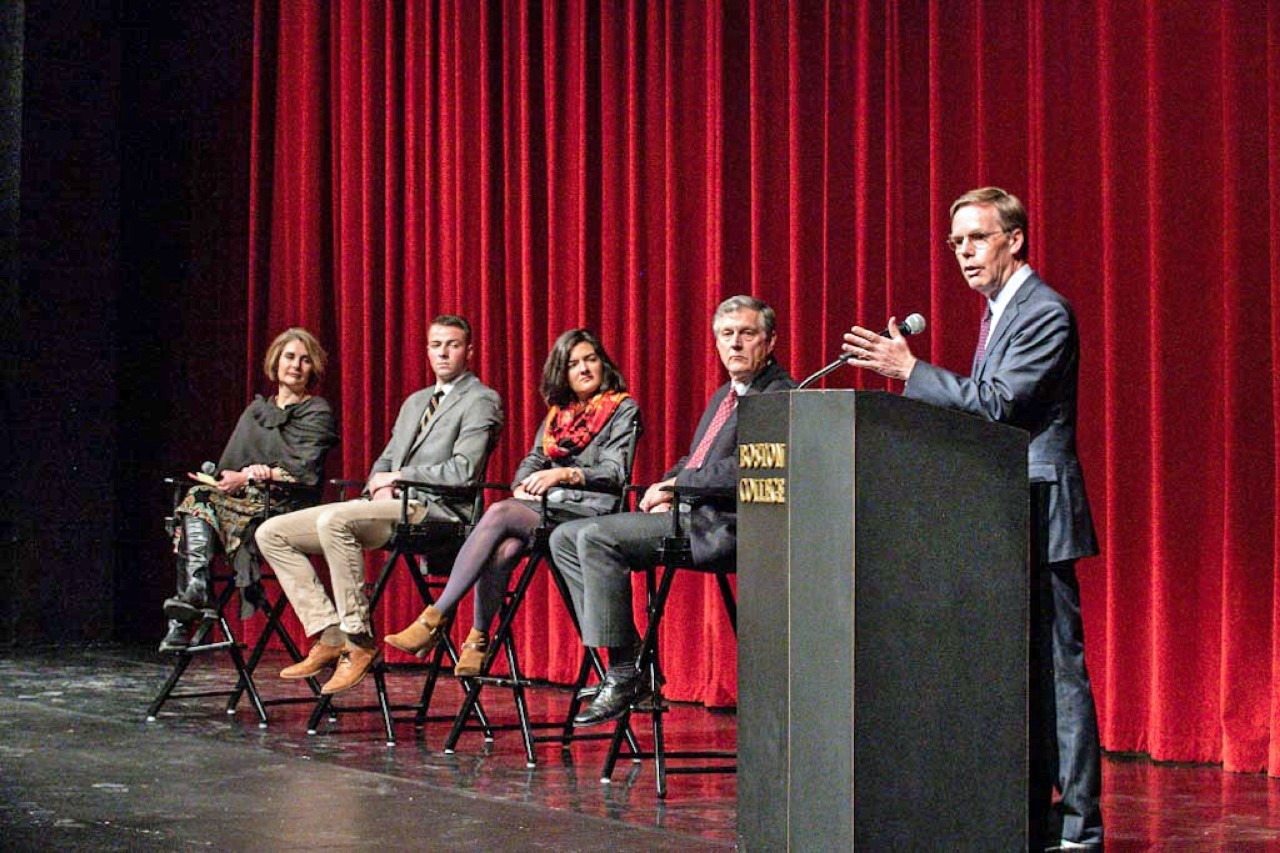 “This is a true crisis of trust in the leadership of the Church, of our own faith,” said moderator R. Nicholas Burns '78, Hon. '02. (Lee Pellegrini)

Burns, a professor of the practice at the John F. Kennedy School of Government at Harvard University and a former U.S. Ambassador to NATO and Greece, acknowledged the pain many Catholics are experiencing.

“We are meeting because the Catholic Church is in crisis and if the Church is in crisis, that means we are in crisis – as individuals and as a Catholic family,” said Burns. “The clergy abuse scandal … it’s been devastating to Catholics in the United States and worldwide. [There has been an] absence of decisive leadership by the Vatican, an absence of decisive leadership by the American bishops.”

“This is a true crisis of trust in the leadership of the Church, of our own faith,” Burns said as he introduced the panelists: Professor of Theology Stephen Pope, BC School of Social Work Professor for Macro Practice Tiziana Dearing, School of Theology and Ministry graduate student Stephanie Sanchez, SSW ’18 and STM '19, and Morrissey College of Arts and Sciences undergraduate Sean Barry ’21.

The discussion ranged broadly over the panelists’ own faith experiences, their reactions to the many scandals that have plagued the Church, as well as their internal lives as Catholics in an increasingly secular U.S. society.

“In times of crisis like this, you a have a choice to either engage with these questions, to reflect, to listen, to take action, to do the small things you can through community. Or you can choose to be consumed by anger and rage.”

To the question of how they remain firmly rooted in their Catholic faith, the panelists drew on their deep personal and family connections to their spiritual beliefs.

Pope, who at one time contemplated a life in the Society of Jesus, said his fellow Catholics help to energize his faith when it is most deeply challenged.

“I remain Catholic because of family affiliation, but also a deep conviction that I gained after 30 years of theology struggling with ‘how can I be a better Catholic?’,” Pope said. “What gives me hope is seeing change, seeing young people that care, old people that care, seeing people leave the Church, but still love the Church. Realizing that we are in this together.

“I get hope from community above all,” Pope continued. “The Church is a community. Jesus calls us together and he promises us suffering. So, we can see that Jesus’s promise is fulfilled. What makes us Christians is we endure with hope and patience and courage. We get that from each other… The hope is we commit to our community even more on the grassroots and the local parish level, to get involved, to pray in community, to live and care for one another, and to show hospitality for the stranger.”

“This Church is my home. This is my place. I have been raised in the Church. I have had the great gift of faith in my family. I can remain hopeful because I know that Jesus isn’t going anywhere. ”

Sanchez said her steady faith is supported not only by her internal beliefs, but by her active participation in practices and places that sustain her.

“This Church is my home” said Sanchez. “This is my place. I have been raised in the Church. I have had the great gift of faith in my family. I’m not going anywhere even though we’re terribly broken right now. Church is home base, where I go and fill up for the next week. I can remain hopeful because I know that Jesus isn’t going anywhere.

“We talk about the institutional Church and ways it needs to change and grow and shift,” Sanchez said. “But God is ever-present, ever-loving, ever-full of mercy. So, for me, the timing of this is perfect with Advent right around the corner. There is nothing like Advent to give me joy. We need joy. We have lost it in our Church and it is coming right back. Get ready. We need to sit in church and pray and welcome Jesus anew. God makes everything new and we celebrate that in a few short weeks and that is what gives me a lot of peace and allows me to stay.” 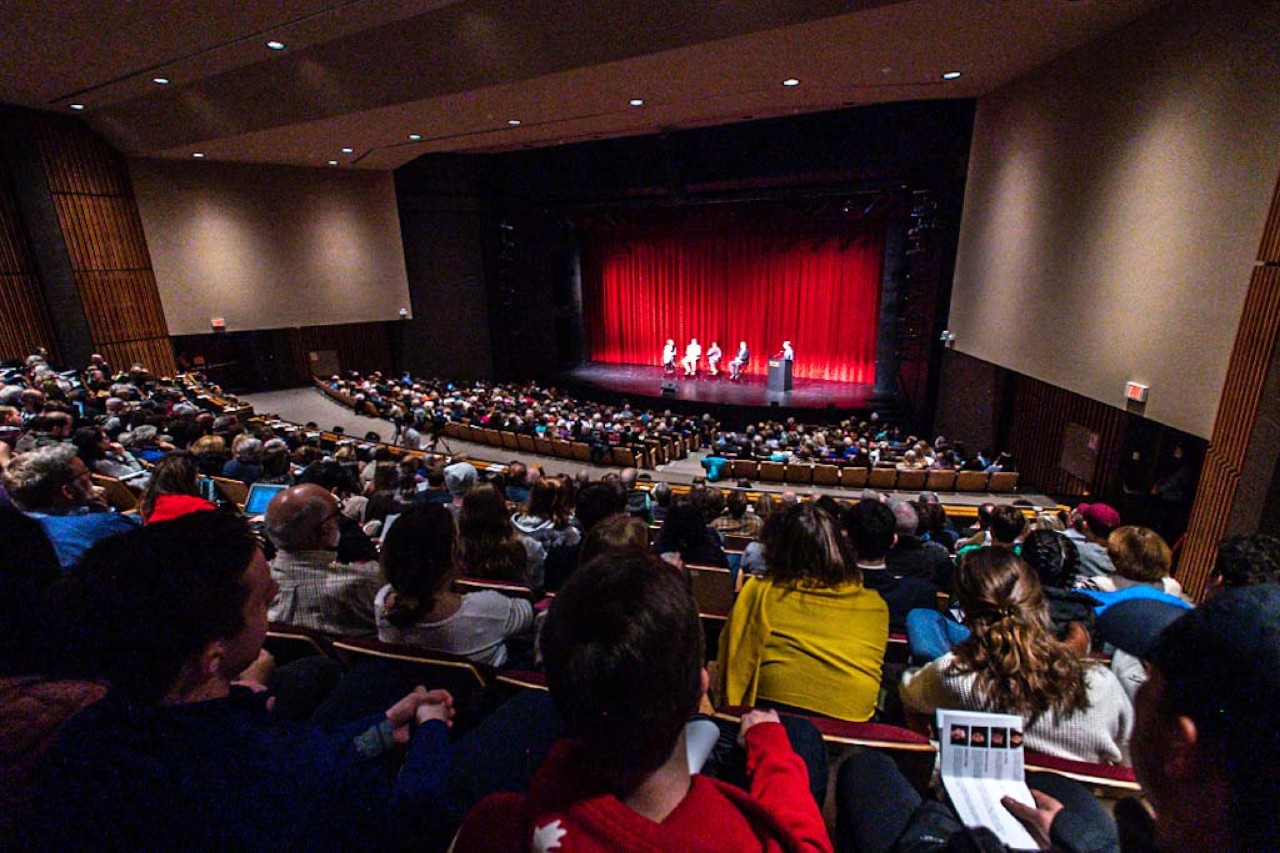 The panel drew an audience of some 500 to Robsham Theater.

Barry talked about receiving the gift of a seashell from a child in the Dominican Republic at the end of a service trip during which he immersed himself in the village community to cope with news that a former high school teacher had passed away.

“This crisis has forced me to ask myself ‘what is my seashell?’ What is the symbol that what you do matters,” Barry said. “In times of crisis like this, you a have a choice to either engage with these questions, to reflect, to listen, to take action, to do the small things you can through community. Or you can choose to be consumed by anger and rage. So, in times like this, I ask myself ‘what is my seashell?’ What is it that keeps me going? I invite you to do that with me and that’s my hope for the future, that shared dialogue.”

Dearing said the formational relationships she established with her parish priests are part of what help her keep the faith during turbulent times for the Church. In addition, Dearing described her catholicity as central to her Christianity.

“First off, parish priests have taken beating through this process. But there is no question that part of the reason my faith is so deep is two parish priests: Fr. William Fitzgerald and Fr. J. Bryan Hehir,” Dearing said. “Their roles in my life and formation have had profound sticking power for my faith, and I want to honor them and acknowledge them. The second thing is my Catholicism is how I know God. I don’t ever want to be disconnected from God. My Catholicism: the sacraments, the practice of faith in community, and Mass are [all examples of] how I know God. Third, every corner and aspect of my life is animated by the social mission that Christ handed down to us.”

Burns said that building a stronger Church will depend on Catholics both young and old. “We know this Church is worth saving and this begins with us,” Burns said.

The event was co-sponsored by the School of Theology and Ministry and Morrissey College of Arts and Sciences Department of Theology.

View a video of the program online via C21 Facebook Live.