Skip to main navigation Skip to main content
BC News > Faith & Religion > Jesuit, Catholic > BC graduates share formative experiences that led them to the priesthood
Channels

Paths to the priesthood

BC graduates share formative experiences that led them to the priesthood

It was at an early age—the first grade at Our Lady of Peace School in Marshfield, Wisc., to be exact—when Chris Krall, S.J., ’05, felt a calling to the priesthood. That interest, which he began discerning with the help of a local priest in the years ahead, found support and inspiration during his time at Boston College.

“I was able to meet with the Jesuits during my junior and senior years of high school,” said Krall, “and to help aid the discernment, I was encouraged to attend Boston College to meet and work with many more amazing Jesuits that lived, worked, and taught on campus.”

At least 10 other men have graduated from the University and entered the Society of Jesus during the past 20 years, and many see common themes: the charism, community, and traditions of BC helped support their vocation to the priesthood.

Sam Sawyer, S.J., ’00, now an executive editor at America Magazine, is one of them.

“Listening to a talk on Jesuit education during spring of my freshman year, hearing the description of Ignatius and the first companions united by a shared desire to ‘help souls’ – it was like God tapped me on the shoulder to say That’s the name for what you want’,” Sawyer remembered. 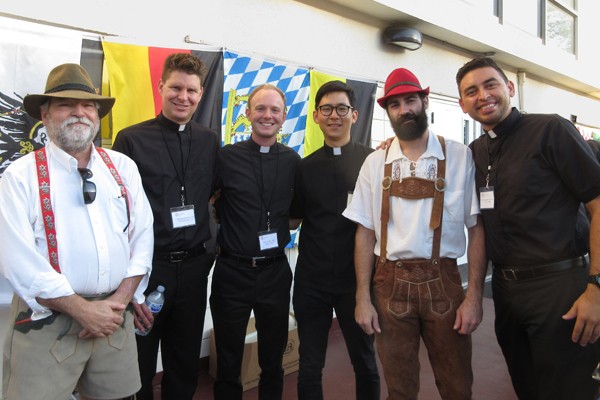 But the “calling”—that tap on the shoulder that Sawyer mentions—isn’t always immediately recognizable.

But countless applications and rounds of interviews led nowhere, and Kelley began to rethink his path.

“In my desperation, I took a step back to reflect,” he recalled. “I had gone on a Halftime Retreat a year earlier and then taken a class with Theology Professor Fr. Michael Himes, so, I sat down and thought about his Three Key Questions for Discernment: What brings me joy? What am I good at? What does the world need me to be?”

This introspection led him to a year of post-graduate service, then onto graduate school at Loyola Marymount University, and toward a realization that he, too, “wanted to live a life of service” modeled after the Jesuits knew.

“I could see how God’s providence was at work all along,” Kelley said, “especially in my time at BC.” He is currently in the Jesuit Novitiate of the Three Companions in Culver City, Calif.

Even when one’s interest in the priesthood becomes clear, the prospect of a vocation can still be “frightening,” as Mario Powell, S.J. ’03, put it.

“I didn’t really tell anyone,” he said. “I remember telling then Morrissey College of Arts and Sciences Dean J. Robert Barth, S.J., but I was so nervous I sounded like a babbling idiot. He was very kind to me.”

From there, Powell, who directs the REACH Program at Regis High School in New York City, began opening up to friends that he was thinking about the priesthood. “I was so afraid that folks would respond negatively. My experience was the exact opposite. People were amazingly supportive and curious.” 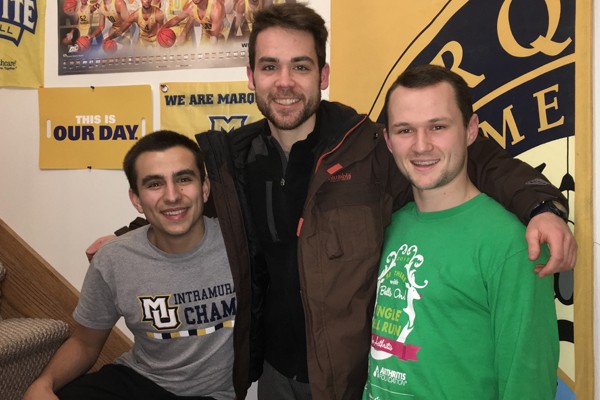 Sullivan “Sully” McCormick, S.J., ’15, said friends provided him significant encouragement. “Close friends supported my vocation,” he said. “Singing in the Liturgy Arts Group surrounded me with people committed to their faith lives and Mass.” McCormick is in the Jesuit Novitiate of St. Stanislaus Kostka at St. Charles College in Louisiana.

And while quick to highlight networks of professors, clubs, and other activities that affirmed their interest in a vocation, these BC grads say, the interaction with priests and Jesuits at Boston College added a level of depth to their discernment.

In the classroom, Krall had several Jesuit professors who showed him the many ways he can live out his vocation. Stephen Schloessor, S.J., a former history professor now at Loyola University Chicago, “was the best history teacher I ever had and allowed me to see the influence a teacher can have on students. I still try to model his teaching style.”

Another mentor was the late Ronald Anderson, S.J., an associate professor of philosophy who died in 2007. Fr. Anderson, with doctorates in both philosophy and physics, taught The Philosophy of Physics: An Introduction to its Themes, Science, and Religion, and was known on campus for his dedication to scholarship, teaching, and mentoring.

“He was a big hero,” said Krall, who is now completing his own interdisciplinary doctorate in theology and neuroscience at Marquette University

Today’s students equally appreciate the relationships formed with BC’s large Jesuit Community. The Lunches with Jesuits series—sponsored by Campus Ministry’s Ignatian Society of Boston College and hosted by the Jesuit Community—takes place twice-a-week in the St. Mary’s Hall dining room and brings together five students and a Jesuit for lunch and candid conversation. It is booked throughout the year.

For BC graduates now in the Society of Jesus, those types of candid conversations were key to their vocational journey. They cited more than a dozen past and current BC Jesuits as influential in their discernment, including University President William P. Leahy, S.J., and Frs. Casey Beaumier, Jack Butler, Frank Clooney, Terry Devino, Ted Dziak, Paul McNellis, Joe O’Keefe, Cy Opeil, John Paris, John Savard, Ron Tacelli, and the late Howard Gray and Bill Neenan.

“These men were examples of their vocation, making them more alive and interesting, and of generosity and fidelity as priests and ministers,” Sawyer said of the Jesuits he knew at BC.

Kelley, who converted to Catholicism his sophomore year, said that Fr. Tony Penna, associate vice president for University Mission and Ministry and director of Campus Ministry, introduced him to one of the gifts of religious life: joy.

“Fr. Tony’s example was very formative for me,” he said. “I saw the joy of the priesthood and the graces of the vocation. [From there] I got to know Jesuits, as well, and grew to really appreciate their wisdom, presence, and approachability.” 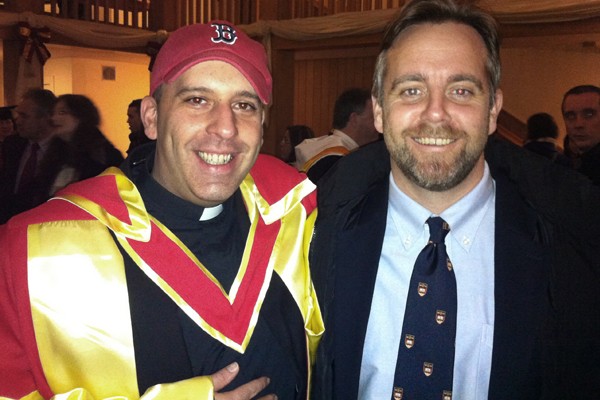 “Being a Jesuit is the hardest thing and the best thing I have ever done. I find great joy in being with men who are trying to do the magis,” said Todd Kenny, S.J. ’95, now the vice president of mission and identity at Cristo Rey Atlanta Jesuit High School.

Todd Kenny, S.J. ’95, now the vice president of mission and identity at Cristo Rey Atlanta Jesuit High School, echoed the importance of joy. “Being a Jesuit is the hardest thing and the best thing I have ever done,” he said. “I find great joy in being with men who are trying to do the magis.”

That connection to the magis—seeking and working for the more, considering how we can better give ourselves to others—is a link these men share as Boston College graduates and, now, as Jesuits.

Students interested in exploring a vocation can stop by the Manresa House (58 College Rd.) or email ministry@bc.edu to meet with a Jesuit or member of a religious order. 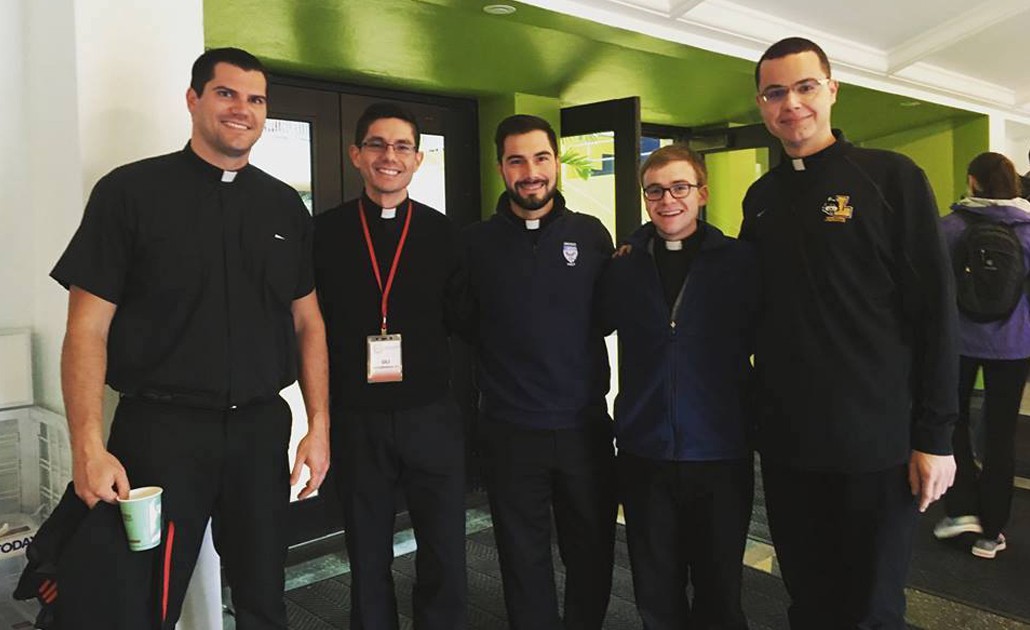