Sarah Pilgrim ’18, a pre-med student majoring in biochemistry with a minor in inclusive education, will run in the Boston Marathon on April 16 to raise funds for the Campus School at Boston College.

Located in Campion Hall, the Campus School provides a personalized approach to special education for children ages 3–21 with multiple disabilities. As the co-president of the Campus School Volunteers, Pilgrim is passionate about the school and its students.

“The students are the most hard-working individuals that I know and inspiring in everything that they do,” said Pilgrim, a native of Naperville, Ill. With them in mind, she said, “running a marathon didn’t seem like such a hard feat.” 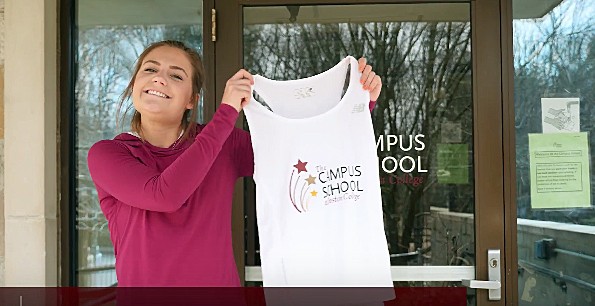 Pilgrim’s love of running began in middle school, where she participated in track and cross country. “I’ve always felt comfort and solace in running on my own and a sense of belonging when running in groups," she said. "I’m a huge proponent of running for yourself and not a time or place.”

She has been training for the marathon since learning of her entry in late January, not long after completing a half-marathon in late November. Throughout her preparation, she has been supported by fellow runners at BC who communicate through a group message, sharing advice and inspiration.

“Ever since I decided to go to school at BC, I wanted to run the Boston Marathon," said Pilgrim. "I didn’t know if it would be possible as a student, as I was approaching my final year here, but when the opportunity presented itself to not only run in Boston but for the Campus School that has come to mean so much to me, I couldn’t turn it down.

“It wasn’t hard to be inspired by the great magnitude of runners in Boston, my fellow classmates at BC, and – most importantly – the students at the Campus School, to get out there and run.”