The experiences of three Boston College siblings reflect the complexities, and heartbreak, of the conflict in Syria

It’s a complicated story, woven as it is into the larger narrative of their former community of Aleppo, and their former country, Syria – one that, in turn, has been told and retold around the world through various media. But along the way, nuances are often lost or ignored, misperceptions created, and assumptions formed. Even the three siblings don’t necessarily agree on all facets of the story.

Still, one point is beyond dispute: More than two years after they and their parents Hassan and Noor left the deteriorating situation in Aleppo, Layla, Jude, and Matthew are doing quite well at Boston College – immersed in classwork, extracurricular activities and friendships. They relish the positive influences in their BC lives, peers and mentors alike – even friendly campus shuttle bus drivers who offer advice on romance – and little joys and discoveries.

“Aleppo had the most parks of any city in Syria,” says Matthew, an international studies major, Undergraduate Government of Boston College senator, member of the Emerging Leader Program and Residence Hall Association, and swing-dancer. “One thing I love about BC is to once again be around well-tended trees and grass.”

For Jude, a biology major, pre-veterinary student, and pianist who went on the Appalachia Volunteers service trip to South Carolina this spring break, there was the day when she happened upon a small building tucked away on Newton Campus. Inside, she was delighted to find seven grand pianos.

“I basically live in O’Neill Library,” laughs Layla, a biology major with a medical humanities minor and vice president of the Public Health Club, who plays in the Flute Ensemble and Middle Eastern Ensemble (as does Matthew). “But my friends and I do things like go salsa dancing.”

Where the story starts to get complicated is when people learn that the Aboukhaters officially entered the U.S. as refugees. It’s a word with some powerful connotations, and invariably creates presumptions that aren’t always warranted.

“We didn’t want to go, we didn’t leave of our own free will, so that is what we’re called,” says Layla. “But as we tell people, we didn’t swim here. We came by plane. We had resources.”

“Even our pets came with us,” adds Jude.

In fact, the three siblings were all born in Boston during the 1990s when Hassan was studying at Tufts and Noor doing coursework at the Boston Architectural College, and retained their American citizenship even after the family moved to Syria. Because Layla turned 21 when she returned to the U.S., she was able to sponsor her parents as permanent residents, and both have green cards.

When President Trump issued his executive order restricting travel and immigration for Syrians, some well-intentioned friends thought the three were at risk (“You can stay in my home,” one told Jude). If anyone in the family might be affected, it was Noor and Hassan; they decided to forego the trip to Canada they were contemplating, on the chance they might not get back into the U.S.

Things didn’t used to be so complicated, certainly not in the Aboukhaters’ youthful memories of Aleppo as it was. There was the city’s famous citadel, one of the oldest castles in the world; in that neighborhood, you could get a good breakfast of yogurt, hummus and pita bread. There were the aforementioned parks to run around in, and plenty of friends to play with.

“We had city life,” says Matthew, who wears a wristband with the colors of the Syrian flag. “Not Boston or New York, obviously, but everything you could want.”

The siblings kept their American connection alive, too. Layla recalls watching episodes of “Barney” they had videotaped and brought with them, and her mother’s readings of Dr. Seuss. But the Harry Potter series was a treasured, and important, part of their childhood.

“Harry Potter made me fall in love with reading,” explains Layla. “Because I read so much, it helped me with my English. If not for reading, I honestly wouldn’t have gotten into BC.

A central part of the Aboukhater family life was – and continues to be – their Christian faith. Their church’s youth program was a focal point of religious education, leadership development and social activity, and also was where Layla, Jude, and Matthew first learned about Jesuit beliefs and practices through a Dutch Jesuit priest who led annual retreats throughout Syria.

The younger Aboukhaters’ story compiled new chapters – the teenage years, high school, and in Layla’s case, dental school – as across the Middle East and North Africa a series of incidents of unrest gradually began to coalesce. The so-called Arab Spring seemed far off until March of 2011, when the arrest of more than a dozen children for writing anti-government graffiti in the southern Syria city of Daraa triggered protests, which escalated to other cities – including Aleppo – and precipitated a government crackdown. The rebels pushed back, and conflict continued and spread.

The family followed these developments with increasing ambivalence and anxiety, say Layla, Jude, and Matthew. The protestors and activists proclaimed a “revolution” against the government of Bashar al-Assad, but what exactly did that mean? How would it play out? And what might the consequences be for Christian families, many of whom had experienced religious, political and economic persecution at the hands of those now fighting Assad?

“As soon as the revolution started, we saw what it was,” says Jude. “It had nothing to do with reform. It was about power.”

This is the Gordian knot in the thread of the Aboukhaters’ story. The intricacies of Syria’s civil war, its combatants and alliances, have been notoriously difficult for many Americans to grasp, especially in an age where communication often occurs via social media memes and 140-character proclamations. As the siblings explain it, rejecting one side in the war does not mean you wholeheartedly embrace another; when you point out that civilians in pro-government neighborhoods have suffered, it is not to diminish the suffering of civilians elsewhere.

The calculation is this: In what scenario are your loved ones and community most likely to survive intact?

Living through the war, say the Aboukhaters, was much like the metaphor of a frog sitting in slowly boiling water – you acclimate, until the point when the situation overtakes you. The first rise in temperature came in June of 2012: A loud explosion in the center of Aleppo shook their school building, and the students were all sent home. But then bombings became routine, and classes continued as scheduled. Then the school was closed, students were moved to a smaller building, and the sports program was cut. Electricity became less and less available, until it was off more often than it was on. 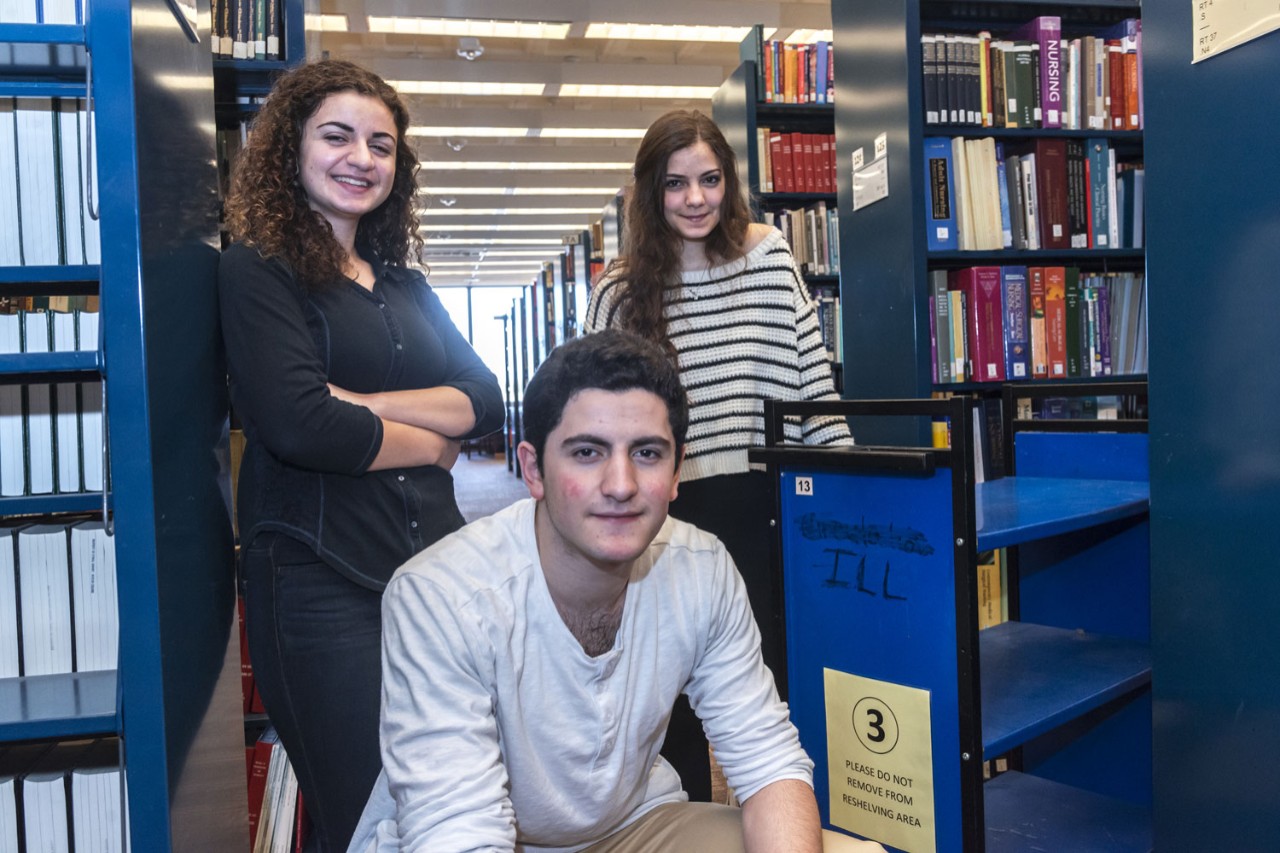 BC undergraduates Layla, Matthew, and Jude Aboukhater in O'Neill Library.

Their parents did not sugarcoat the situation, say the Aboukhaters. Besides the increasing danger and shortage of electricity and hot water, Hassan’s dental practice was losing patients. The family constantly talked about whether or not to stay.

In 2013, anti-government forces formed a blockade in the district where the Aboukhaters lived. The family adapted: The children moved into the guest room. Beds and couches were moved away from the windows. Windows were kept slightly open so the pressure caused by explosions wouldn’t blow them out. And the family sought any semblance of normalcy.

“It wasn’t until we were away from Syria, and could look back with an outsider mentality, that we realized how weird things were,” says Jude. “You’d go to party with friends, and there’d be explosions on the street, but you would still stay out.”

“My father found a guy selling bread for 500 Syrian pounds – usually, the price would be maybe 10 or 15 pounds,” adds Matthew. “And he bought it from him.”

Still, the family held fast, hoping that there might be a resolution. Meanwhile, many of their friends and acquaintances left, and expressed surprise when they found out that Aboukhaters had remained. In the summer of 2014, they considered relocating to a city on the coast, but news of a rocket attack there scuttled that idea. Finally, the family decided it was time to leave Syria.

Layla and her father went first – he went on a travel visa for a dental conference, and was able to obtain a work visa for a longer stay. Matthew and Jude followed two months later, and Noor five months after that. They settled in Canton, to the southwest of Boston, and through a church they attended in West Roxbury were able to find an Arab ex-pat community, mainly Iraqi and Lebanese.

They thought of those left behind in Syria or elsewhere –like Noor’s mother, who would die in Lebanon from cancer while awaiting a visa to Australia – but the three siblings had to make a quick transition. Jude and Matthew were halfway through junior year of high school, and needed to start making college plans.

Layla, meanwhile, looked to resume her dentistry studies, but ultimately decided to go in a different direction. She considered several area colleges, but the Jesuit presence at BC felt familiar and inspiring. “I felt at home,” she says.

BC thus became the choice for Matthew and Jude. “We went for the sake of our parents – they’re just not ready to have us all over the place,” says Jude. “It also goes more with the way things work in Arabic society, where the children stay at home until they’re out of college.”

Yet it was impossible to shut out Syria.

“I remember sitting in the high school cafeteria, and I’d see friends posting on the Facebook page of someone who had been killed, commenting as if that person was still alive,” says Jude. “And just a few feet away, people were discussing the Kardashians. I understood that it was just something you talked about at lunch, but I felt a big disconnect between what we were thinking and experiencing – living in a different world.”

What rankled the Aboukhaters – and continues to do so – was the US media coverage about Syria: too often focused on sensational, emotionally charged images and anecdotes, and insufficiently balanced to represent all segments of the Syrian population. Explaining their perspective has been a constant reminder of the limits of engagement via Facebook and other social media.

“There’s so much material that promotes this one-sided, black-and-white view of the conflict, where the government is killing everyone,” says Layla. “The situation is more complicated, but it’s difficult to get this across if it doesn’t fit the narrative that’s out there.”

Predictably, Layla, Matthew, and Jude also find themselves cast into the role of being ad hoc spokespersons or experts on matters involving refugees and immigration, such as the Trump executive order. As Layla explained to The Heights, Syrians and other Arabs trying to enter the US have long faced considerable scrutiny – like her mother, who was detained and questioned for hours.

Hassan and Noor often talk with the children about the future, and what place Syria might have in their lives. “Mom tells us we have an obligation to give back,” says Matthew. “We’re in a unique position to be able to help Syria, and that is something we should do for all it gave us.”

Help they will. But they will not live there again.

“It’s such a volatile area,” says Matthew. “History so often repeats itself.”

Yet Layla, Jude, and Matthew say they will make sure their children know about Syria, and see the country that is so integral to their family’s story.

Because, after all, the Aboukhaters’ story is not finished.