During his time at Boston College, Martin Luther King Jr. Memorial Scholarship winner Anthony Smith ’19 has demonstrated a faith-based resiliency and inner strength, as well as the scholarly mien befitting a student of history.

During freshman year, he recalls, he found himself feeling “disconnected” from BC, as one of relatively few students of color in his Newton Campus residence hall. So Smith did what he does best. He looked inward, then moved forward.

“I reflected on what I wanted, from BC and most of all from myself,” says Smith, a Waltham native whose parents were born in Haiti. “Even if things hadn’t quite worked out like I’d thought, I realized I still had the chance to accomplish what I’d come to BC for; I needed to make the best of it.” 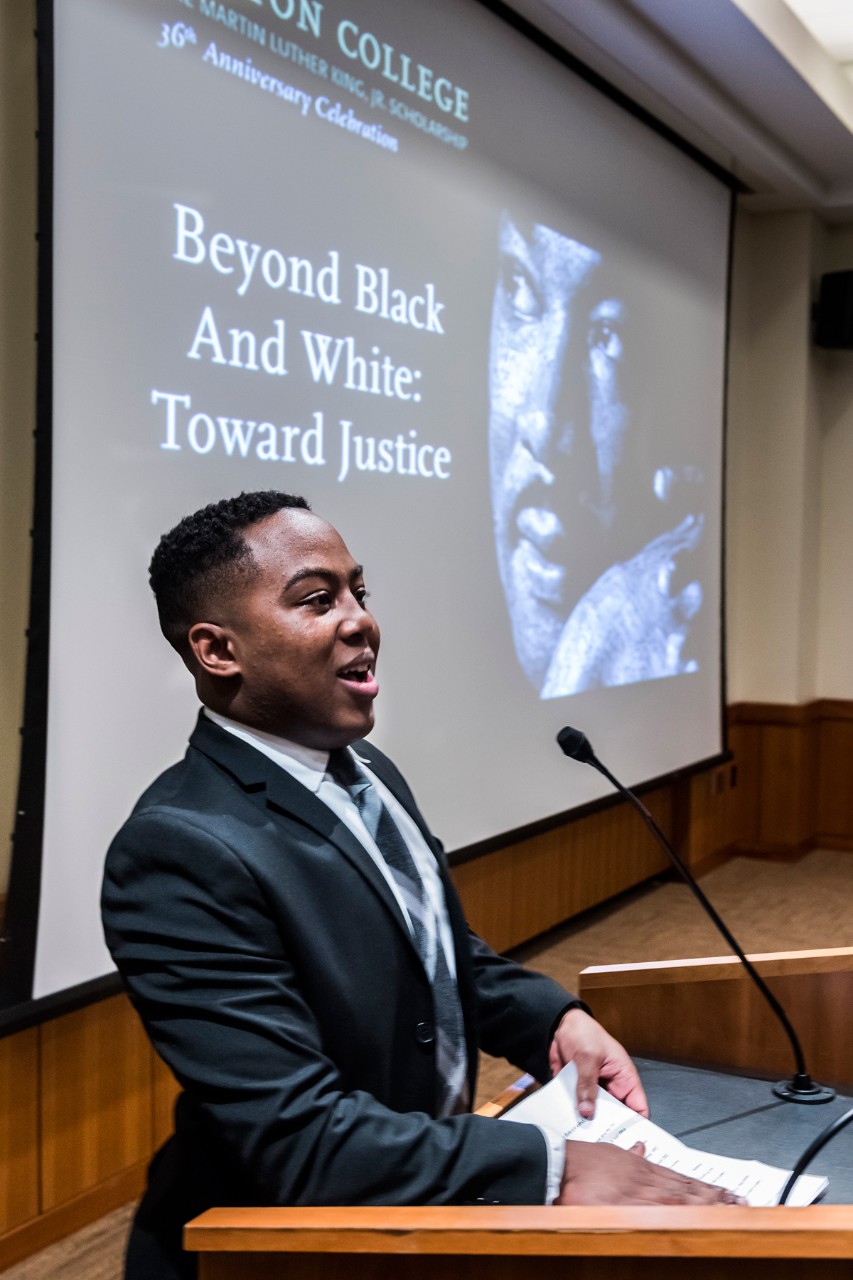 Smith found people to give him support and advice, and sought out – or even helped create – resources and opportunities that contributed to his intellectual and personal growth. Most of all, he’s relied on his faith.

“All aspects of life interconnect,” he says, “and faith has always been at the center, leading me on.”

His faith, along with other qualities, has led Smith to the MLK Scholarship, presented annually to a Boston College junior who has demonstrated superior academic achievement, extracurricular leadership, community service and involvement with the African American community and African American issues. Smith received the honor at the Feb. 1 Martin Luther King Jr. Scholarship Banquet.

“It was overwhelming, but also a milestone,” he says of the event. “I feel the MLK Scholarship is a platform for advocacy, but it is not mine alone: It is shared by the other four finalists [Angela Arzu, Omolayo Ojurongbe, Evan Palmer and Bryan Paula Gonzalez]. And it is shared by my family, who have sacrificed so much for me to be at BC. We all represent leadership in different ways.

“Now, of course, the question becomes ‘What’s next?’ That’s a challenging thing to think about, but I’m very excited for what’s next.”

A double major in history and African and African Diaspora Studies (the first independent AADS major to add a second major), Smith is a member of the McNair Post-Baccalaureate Achievement Program, which prepares low-income, first-generation undergraduates for graduate school.

Smith’s academic interests center on history at the intersection of race and sexuality, with a focus on gathering different, nuanced perspectives to illuminate both major historical events and periods as well as everyday life.

“When you study the impact of slavery, or racism, it’s not enough to take one overall view,” he explains. “You have to compare the experiences of black men with those of black women, because they are not interchangeable.”

The History Department has been a nurturing environment for Smith, who cites faculty members like Martin Summers and Cynthia Lynn Lyerly for their advice and encouragement. He points to the Making History Public class taught by Robin Fleming, which involved creating a public exhibition based on the class research project, as a foundational experience.

“That class helped me think of myself as an historian, instead of simply a student,” he says.

Smith put his scholarly talents to use through an Amanda V. Houston Traveling Fellowship last year, visiting New York City, Chicago and Washington, DC, to do research on dominant cultural representations of black masculinity – “how we create and define ourselves against stereotypes.”

“I’ve been fortunate to both teach Anthony in the classroom and to advise him on his research funded by the Amanda V. Houston Traveling Fellowship,” said Summers. “Anthony works really hard to be the best scholar that he can be and it’s been an absolute pleasure to work with him. Along with his commitment to supporting and mentoring other students of color and first generation students, I can’t think of anyone more deserving of the MLK Scholarship.”

Smith has taken part in several extracurricular and service activities, including the Jamaica Magis service trip and the AHANA Leadership Council. His most significant commitments include his involvement in Dedicated Intellectuals of the People (DIOP), a weekly gathering of male AHANA students to discuss social, intellectual and spiritual issues: “It’s an important space to talk about being a man. We challenge each other, hold each other accountable.”

Another is the First Generation Club, an organization he co-founded that brings together first-generation college students to discuss, and improve, their campus experiences.

“We have a diverse group,” he says of the First Generation Club. “Although no single experience or background defines a first-generation college student, there are things we share. You take pride in being the first, but you can feel insecure, especially when it comes to contributing in the classroom. You have to navigate by yourself, and learn to self-advocate. And you can be tough on yourself, and often feel there’s little or no room to make a mistake.

“I feel like the club is an extension of Dr. King’s dream, where students of different identities and beliefs come together. And it’s made clear to me that every human is made in the image and likeness of God.”

Smith says he’s been “adamant about going to law school since I was 12,” but serving as a teaching assistant and taking part in BC’s service-learning PULSE Program, among other experiences, has broadened his horizons – a combined PhD/JD program is one post-BC possibility.

“I feel BC is, in many respects, a microcosm of the real world,” he says. “So I’ve been able to get a sense of what I have to do to understand myself, and the importance of advocating for others. It’s been a great opportunity, and I have my family to thank for making it possible.”