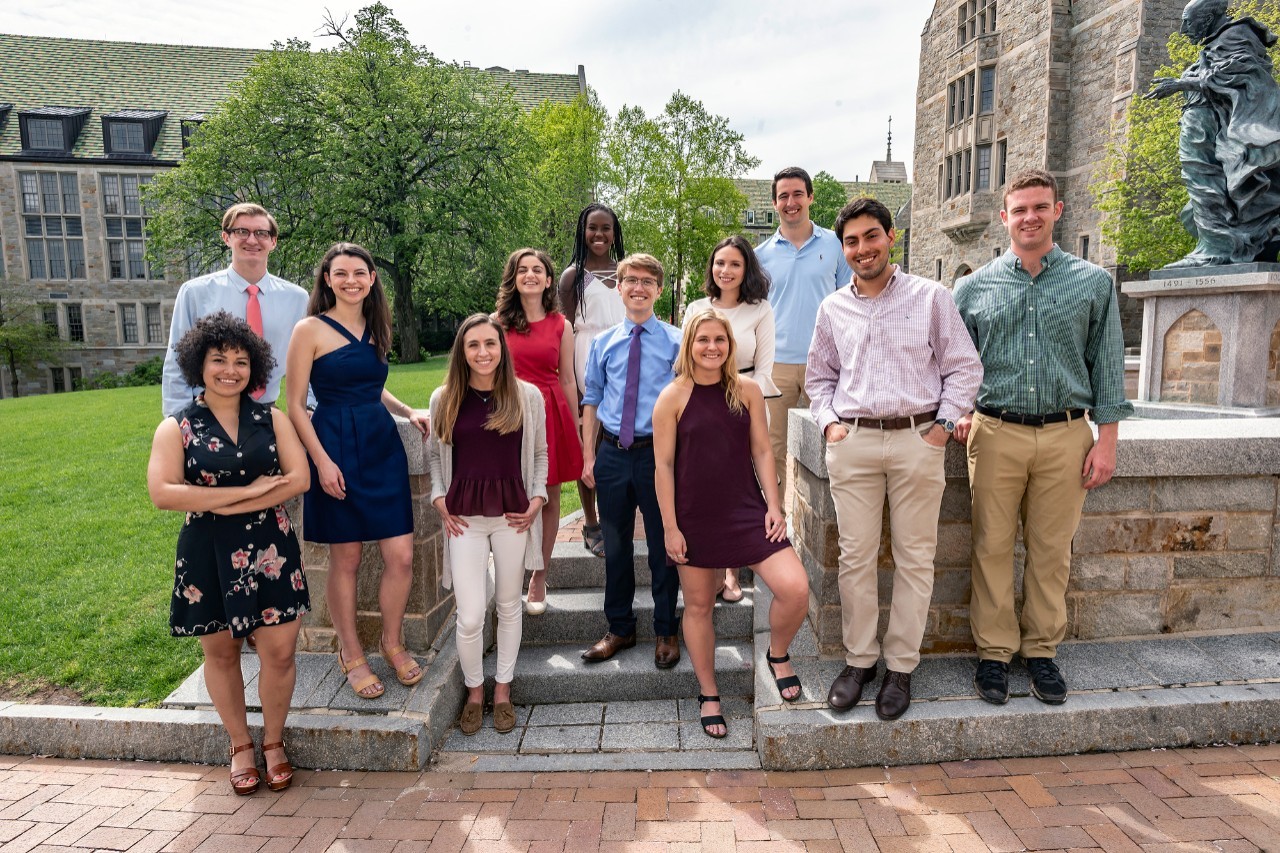 Sixteen members of the Class of 2018 and three Boston College alumni have received Fulbright Scholarships, which support a year’s post-baccalaureate study abroad. Recipients typically pursue research in various disciplines, or serve an English Teaching Assistantship, through which they teach English language and provide insights about American culture.

Two of the 2018 graduates were named as Fulbright alternates, pending confirmation of funding for their projects. Eric Parolin ’13 also was awarded a Fulbright to South Korea but declined it to pursue graduate studies.

Other externally awarded fellowships won by BC students include Benjamin A. Gilman Scholarships and a Fund for Education Abroad Scholarship.

Here's a look at this year's Fulbright recipients.

PROJECT: Work on research at Malaya Medical School that, as part of developing HIV monitoring systems, will help identify at-risk populations with high numbers of transmitted drug resistance cases; volunteer at a clinic to learn more about affected population.

FUTURE PLANS: Attend medical school in a dual MPH/MD program; hopes to work at Centers for Disease Control or World Health Organization with focus on HIV/AIDS.

•“At Boston College my eyes were opened to the opportunities in research and public health, and I became interested in HIV research, which stands at the intersection of these interests. Malaysia has been heavily struck by the HIV epidemic, and in response to national needs, its community of scientists and researchers created some of the strongest HIV/AIDS research centers in the world.

“The end goal of my work is to alleviate the burden of HIV, reduce the number of HIV transmission cases and, in the long term, help work to eliminate the disease. I firmly believe that someday we will completely eliminate HIV, but only as a result of decades of research from all over the world. When that day comes, I hope to be able to say that I contributed to it as well.”

FUTURE PLANS: Pursue a graduate degree in international education policy or public affairs, followed by a career with an organization like USAID or in the U.S. State Department.

•“My interest in Tajikistan arose from my study abroad semester in the country in spring 2017. I studied Farsi and Tajiki daily and taught English at a community center sponsored by the U.S. Embassy in Tajikistan. Living in Dushanbe exposed me to a number of challenges within the Tajik education system, namely access to quality English language resources. It drove me to write a senior thesis on the topic when I returned to BC.

“My Fulbright research project aims to determine whether mobile telephone technology can effectively help Tajiks learn English in areas of the country that are distant from a language center. As an increasing number of Tajiks own smart phones, it would be interesting to learn whether there is a market for language-learning platforms like Duolingo and Mixxer. The goal of this research is to help an increasing number of Tajiks learn English, better their understanding of U.S. culture, and enhance their employability in a rapidly changing world.”

PROJECT: English Teaching Assistantship; integrate a deeper meaning of language into her own pedagogy of teaching, while exploring the country’s cultural understanding and perception of disability and difference.

•“I will research how the personal writings of Germans living in late Qing China reflect the understanding/misunderstanding of China in the German mind. I’m excited to be able to unite my interests in German, Chinese and history. At the Free University of Berlin, there will be opportunity to further develop those skills that I began acquiring at BC. I couldn’t be more excited.”

•“As India rises, I hope to contribute to its thriving through the joyous service of teaching.  Serving as an educator has been the most fulfilling experience of my life.  Teaching enables you to transform the world directly and, in turn, teaching transforms you.  I’ve seen how marginal changes made by each class can accumulate over time to expand a student’s understanding of themselves and the world. These changes are the bedrock upon which the future’s foundation lies.  As I’ve done in my time as a Peace Corps volunteer in Western China, I would like to use my Indian school as a launching pad for community engagement.  Recognizing that each site has unique opportunities and needs, I would tailor the activities to be the most effective for the community.”

PROJECT: English Teaching Assistantship; will offer modern dance lessons to students and community members and work with them to choreograph a performance.

•“I am grateful for my family and professors who have supported my education to develop a teaching philosophy centered around social justice and a global understanding of humanity. This award also belongs to the influential role models who have fostered my love of learning and appreciation of diversity. Through cultural exchange and engagement, I hope to realize the common threads across humankind. The role of foreigner will give me greater sensitivity to those who integrate into a new culture. I strive to use this award to empower students as global citizens, to bring about positive change. This Fulbright experience is not for me alone. I hope to share the knowledge and experiences I gain with many others throughout my life.”

PROJECT: English Teaching Assistantship; use stories by American authors to support and teach ideals of tolerance and acceptance.

•“The Fulbright is my next great opportunity to learn, and test what I have learned in college. Teaching English in Saxony during the coming year will hopefully propel my knowledge of German to the next level, and help prepare me for graduate school. I have not been to Germany since the summer after my freshman year, and I look forward to seeing how and where my German has improved.”

PROJECT: Researching economic and social integration of refugees in Vienna.

• “The Fulbright presents an opportunity to understand how society can craft policies and programs to accommodate an increasing number of displaced people.  As a child of Muslim immigrants to the United States, I was initially drawn to Austria because of its unique historical behavior towards its large Muslim refugee population following the Bosnian War. At a time of increasing xenophobic and nationalistic rhetoric, I plan to use my Fulbright year abroad to study Vienna’s social and labor integration of Bosnian refugees, and to compare these policies to modern day refugee integration in Austria and other European countries. I look forward to gaining the skills necessary to contribute to discussions on the global forced migration crisis.”

FUTURE PLANS: Pursue a master’s degree in international affairs with a goal of working as Foreign Service officer in the U.S. State Department.

•“I applied for the Fulbright because I truly believe in the power of intercultural communication and dialogue to foster a more peaceful world over time. I was awarded a Diversity Fulbright award, which means that I will be teaching in a German school with a high number of students with minority and/or immigrant backgrounds. I hope to show my students that the United States is more than what they see in movies and on television. With this award, I want to tell the story of America by highlighting the successes and contributions of immigrant populations and allow my students to tell their own stories.”

•"I decided to apply for the Fulbright because it was a chance for me to engage with a new culture while sharing my own experiences and passion for education. BC has shown me the joy of giving to others, and I am honored to have received this opportunity to do so."

FUTURE PLANS:  Become a German teacher, or work for a multi-national company with a German division, or re-focus career on governmental service.

•“I welcome the opportunity to engage with my German students in addressing the challenges that may arise as the country’s population becomes increasingly diverse. I’m committed to fostering greater intercultural understanding, including how foreigners are depicted in American literature, film and political rhetoric so they become more critical consumers of media.”

PROJECT: Analyze the impact of early intervention on the communication of deaf-blind students.

FUTURE PLANS: Teach for a few years before eventually seeking a doctorate.

PROJECT: “A View from Bulgaria: Domestic Policy Impliations of the Perceptions of Russia & the West”; includes an assessment in Bulgaria of public and political perceptions of Russia, the U.S. and Western Europe, and NATO to determine what effects they could have on Bulgarian domestic and international politics.

FUTURE PLANS: Work for a member of U.S. Congress or for the Congressional Research Service.

•“Fulbright is an incredible opportunity and I am so grateful to be selected. One of the most rewarding experiences I have had at BC is taking [Slavic and Eastern Languages and Literatures Lecturer] Mariela Dakova’s Bulgarian language and Slavic studies courses. I was able to explore a part of history and contemporary international politics I find interesting and particularly important today. With my research project, I hope to contribute to the ongoing conversation around Russian involvement in Central and Eastern Europe.”

•“In our interconnected world, complex problems must be solved through collaboration, which requires communication and mutual learning between people of diverse backgrounds.  Winning a Fulbright grant to Malaysia is important to me because it gives me the opportunity to engage in and facilitate cross-cultural and interreligious dialogue to encourage young people to take an active role in developing comprehensive solutions to today’s global problems.”

•“Over the next two years, I will be performing proteomics research at the Research Center for Molecular Medicine at the Austrian Academy of Sciences, investigating the protein interactions of Soluble Lipid Carriers, a family of transporter proteins. Very little is known about these proteins so we hope to learn about how these interactions may lead to the development and progression of disease states.”

•“I am so grateful to have received a US Student Researcher Fulbright to Colombia. In partnership with Pontificia Universidad Javeriana, Bogota, the project will examine potential barriers to health care faced by ex-rebels and internally displaced persons involved in reintegration following the Colombian conflict. This opportunity is the ideal continuation of my health research in Latin America during my time at Boston College, and will allow me to pursue a professional passion by working in public health with vulnerable populations in a post-conflict setting.”

FUTURE PLANS: Pursue a graduate degree in teaching history to high school students in low-income communities; earn a master’s degree in public policy and work in the US government to educate young people and empower them to lead better lives for themselves and their communities.

•“I’m interested in teaching in Indonesia because my academic focus has been on Islamic societies.  I have a strong desire to teach English while learning about another country’s history and culture.  Given my passion for service, I hope to engage in community service opportunities through local organizations or faith communities; I’m also passionate about the environment and hope to learn about Indonesian views on conservation and sustainability.”

•“Being a political science and sociology major has allowed me to delve into issues of politics and race in an intimate way. Using this knowledge, I would strive to work with Grupo de Estudios Afrolatinoamericos, an organization at Universidad Buenos Aires, to try to create a chapter at the university where I am placed. I would hope to start a creative writing seminar amongst this group in order to encourage free expression about their experiences and highlight their narratives.”

Other graduate and undergraduate award winners include:

•Felix Lee ’19, a history major, won a Fund for Education Abroad Scholarship and will study at the University of Hong Kong this fall. He also will be supported by a Boston College Fung Scholarship.