The retired professor of philosophy, who taught elements of Chinese and Eastern thought at BC for more than 30 years, has died at age 80

Retired Professor of Philosophy Francis Soo, who taught elements of Chinese philosophy and Eastern thought to Boston College students for more than 30 years, died on November 11 at the age of 80. 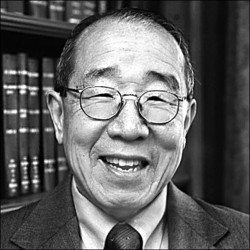 Born in Xuzho, China, Dr. Soo was baptized a Catholic at an early age, and left his native country when he was 18. He joined the Jesuit order and was ordained in 1971, the year he came to Boston for graduate studies in classical Chinese history at Harvard University. But his plans to complete his Jesuit training took a different turn: He met a graduate student named Margaret Hackenberger, who would one day become his wife; and he entered the doctoral program in philosophy at Boston College, where he joined the faculty in 1978.

In addition to foundational courses such as Ethics, Contemporary Ethics, and Philosophy of Person, Dr. Soo taught classes that reflected his ties to both East and West including Classical Chinese Philosophy; Comparative Religion: East and West; Taoism, Psychology and Existentialism. Dr. Soo also was a faculty member in the Woods College of Advancing Studies, where he taught his popular class Marriage and the Family.

Dr. Soo’s dedication to teaching went above and beyond the typical: In one of his classes, he had his students practice Zen meditation—and handcrafted almost two-dozen stools so they could do it properly. He later served on a task force studying student formation as part of the University Academic Planning Council initiative in the mid-1990s.

In 1992, he was honored as Teacher of the Year by the Boston College chapter of the National Jesuit Honor Society, Alpha Sigma Nu. Interviewed by the Boston College BiWeekly, Dr. Soo explained his passion for his profession: “An old Chinese proverb says, ‘To teach is to learn; to learn is to live.’ This ancient wisdom seems true in my teaching career. In teaching, I continue to learn; in learning, I continue to live, to grow and to mature. The more I teach students, the more I learn from them and hence love them.”

Dr. Soo, who retired from BC in 2004, sought to maintain his connections to his Chinese roots, keeping in touch with and visiting relatives in his native country and establishing links to the country’s academic community—he served as a visiting professor to the universities in Lanzhou, Nanjing, and Shandong and the Huazhong Institute of Technology, and helped several family members and Chinese scholars pursue study in the U.S.

He is survived by his wife, Margaret; sons David and Jeffrey; and two grandchildren.

"My father loved teaching BC students for more than 30 years, both new freshman and adults taking classes through the Woods College," said David Soo '03, MA '05. "He set an example for all of the Jesuit ideal of being a 'Man for Others.'"

In lieu of flowers, donations can be made to the Woods College of Advancing Studies at Boston College in honor of Professor Francis Soo.