Associate Professor of English Angela Ards has heard it all about the so-called death of journalism: nobody reads anymore, newspapers and magazines are dying all over the place, they’re so biased anyway, and there’s all that fake news they print.

But Ards believes there is a future for journalism, and that Boston College can have a hand in it.

That’s a big reason Ards joined BC this fall, after 10 years on the faculty at Southern Methodist University. In addition to teaching African American and contemporary American literature, Ards will help develop and direct a new interdisciplinary minor in journalism expected to debut next fall. 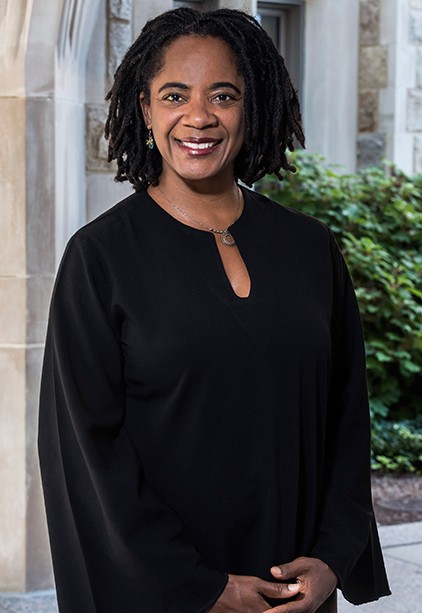 A former editor and writer at The Village Voice and The Nation who also has contributed to Ms. Magazine and other publications, Ards has considerable professional experience on which to draw. But her work as a scholar, whose research interests encompass literature, history and cultural studies, will be equally important in BC’s effort to recast journalism in a modern, multidisciplinary liberal arts framework while retaining awareness of its tradition and tenets.

“There’s no question that journalism as we knew it is facing many challenges nowadays,” says Ards, who holds a doctorate in English from Princeton University, a master’s in African American Studies from UCLA and a bachelor’s in English and African American Studies from University of North Carolina-Chapel Hill. “But the need for sound, quality journalism – as opposed to punditry or entertainment – in a healthy democracy is as great as ever, and will remain so. Hopefully, journalism will figure out its business model in the next several years; in the meantime, this generation of college students can still find a way to write journalistically, for print or some other platform.”

The interdisciplinary journalism minor is envisioned as a marriage “of craft and context, with that distinctive Boston College flair,” says Ards. “At BC, we teach our students to bring all of their learning, and all of their being, to produce work that is of good use to the world.

“With this new minor, we want to take the strengths of BC’s journalism program and make them available to students who see themselves as pursuing other fields or interests. The outcome will be graduates who are able to bring a journalistic perspective to their particular vocation.”

Professor of English Carlo Rotella, who directs BC’s American Studies Program and is involved in developing the journalism minor, says the program will be a “flexible one that can respond quickly to changes in a fast-changing field while also offering a solid grounding in the journalistic tradition.

“We’ll offer a mix of foundational training in journalism as a way of thinking – much like one would study law or history – and craft training in reporting, writing, digital reporting, investigative practices, and other hands-on skills, as well as ethics. In shaping the program and the new minor, we’re making what we offer in journalism much more systematic and purposeful, and also better fitted to both the university and the profession.”

Rotella notes that journalism continues to be an in-demand program of study at BC – with upwards of 15 courses per semester offered – and says Ards is well suited to the task of heading up the new minor.

“In addition to her resume as editor and writer, she’s a tenured professor experienced in organizing and running things in a university setting. That combination is essential. We have students eager to explore the field, and we have tenure-line faculty and a fabulous crew of working-journalist instructors who want to teach them. She’s perfectly equipped to put them together in ways that will benefit all concerned.”

Ards’ current project, meanwhile, looks at a less-chronicled aspect of the post-World War II Great Migration that transformed America’s racial demographics. Focusing on the Dallas neighborhood in which she grew up, Ards is conducting an oral history of black Americans who, for various reasons, opted to stay put instead of relocating to other parts of the US. Their stories, she says, challenge widely held views of non-migrants as lacking in ambition or fortitude.

“I was very enthused to see that the kind of teaching, research and writing I really like to do is valued at Boston College,” she says. “The opportunity to come to this University, in a vibrant city of such amazing institutions, was impossible to pass up. I look forward to helping make this new, liberal arts-driven concept of journalism a part of the BC undergraduate experience.”