Philanthropist, business executive, and former Boston College Trustee Brian P. Burns, the founder and principal benefactor of the John J. Burns Library of Rare Books and Special Collections at Boston College, passed away on August 12. He was 85. 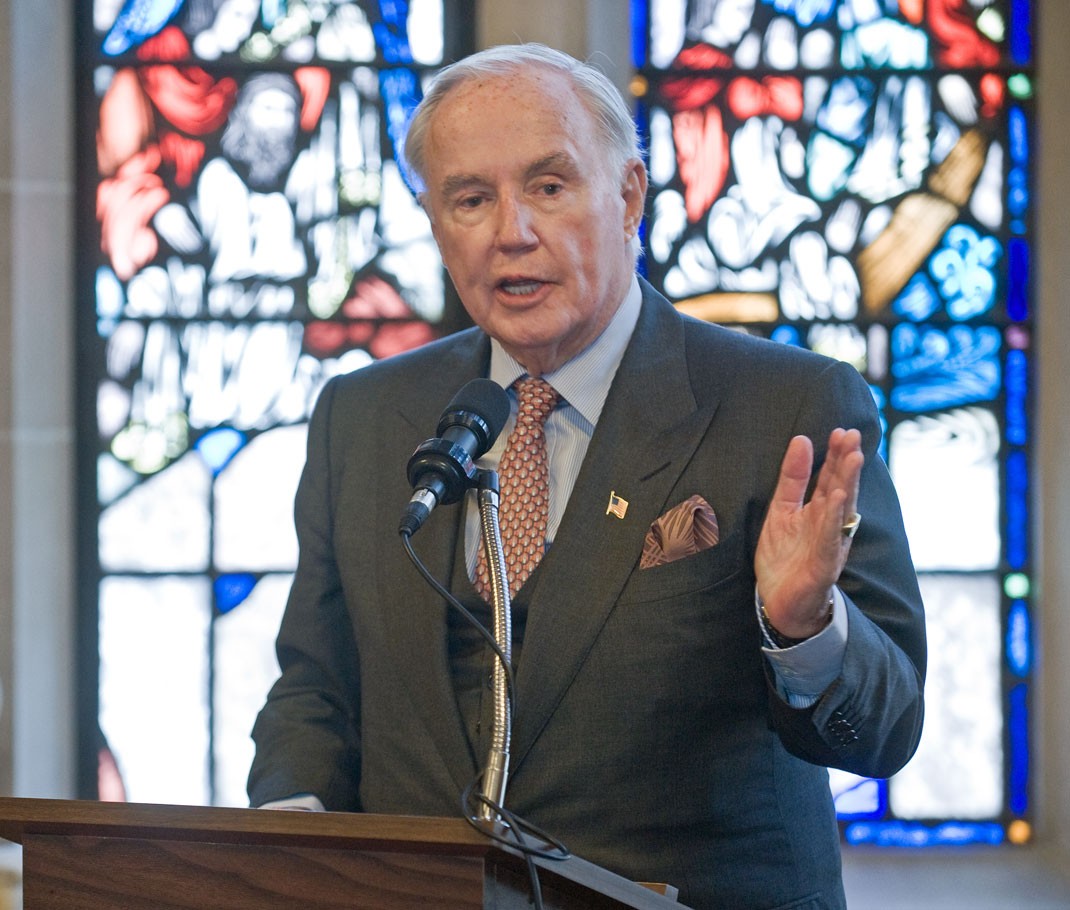 The former chairman of BF Enterprises, Inc., a publicly owned real estate holding and development company, the Massachusetts native was the fifth of seven children born to 1921 BC alumnus John J. Burns and his wife, Alice.

Mr. Burns was a graduate of The College of the Holy Cross and Harvard Law School, and served on the Boston College Board of Trustees from 1998-2002.

In 1963, Mr. Burns became the youngest director of the American Irish Foundation. In the mid-1980s, he spearheaded its merger with the newly established Ireland Fund to form The American Ireland Fund. Since its inception, the AIF has raised more than $450 million in support of Irish charities that promote peace and reconciliation, arts and culture, and community development. Mr. Burns was a lifetime trustee of the foundation.

Mr. Burns was widely praised for his activities in support of the library at Boston College named for his father, who rose from humble origins to become a Harvard Law School professor and the youngest associate justice of the Massachusetts Supreme Court, before being appointed the first general counsel for the Securities and Exchange Commission. The Burns Library opened in 1986, following the renovation of the Bapst Library building​,​ in which it is located. The Burns Library preserves and provides access to archives, manuscripts, rare books​,​ ​and ​special collections of art, photographs, prints, and artifacts, with special emphasis on the religious, cultural, intellectual​,​ and political history of Western Civilization and the Jesuit, Catholic tradition.

The library’s Irish Collection, the most comprehensive in the United States, documents all aspects of Irish history and culture. Premier book and manuscript holdings of Nobel laureates William Butler Yeats ​and ​Samuel Beckett​; the library and personal papers of prominent writer Flann O'Brien; significant collections related to other literary luminaries including laureates ​George Bernard Shaw and Seamus Heaney​; collections on fine presses such as Dun Emer and Cuala; scores and recordings of traditional music, and the principal archives of John McCormack and Mary O’Hara, among other materials, combine to form the most comprehensive array of Irish studies resources outside Ireland.

​To promote use of the collections and enhance Boston College’s Irish Studies Program, Mr. Burns established a visiting scholar endowment through the Burns Foundation, which he chaired. Since 1991, the Burns Visiting Scholar in Irish Studies program has brought to campus a distinguished series of academics, writers, artists, journalists, librarians, and notable public figures who have made significant contributions to Irish cultural and intellectual life. Burns Visiting Scholars have included former Irish president Mary McAleese, Ireland Professor of Poetry Nuala Ní Dhomhnaill, ​historian and Irish Times columnist Diarmaid Ferriter, among more than thirty others.

“The extraordinary support provided by Brian Burns, members of the Burns family, and their associates and friends has helped make Boston College one of the world’s leading centers for the study and appreciation of Ireland and the Irish diaspora,” said Burns Librarian Christian Dupont. "Everything Brian did, he did to honor his father and his Irish heritage. He was a devoted son of Ireland, and a loyal friend and benefactor of BC. I will miss him dearly."

In 1996, works from Brian Burns’ renowned personal collection of Irish art—which includes paintings by such prominent artists as Jack B. Yeats, Walter Chetwood-Aiken, William Orpen, Walter Osborne, and Sean Keating—were displayed at Boston College's McMullen Museum of Art in the exhibition “America's Eye: Irish Paintings from the Collection of Brian P. Burns.” His collection also has been exhibited at Dublin’s Hugh Lane Gallery and at the Kennedy Center in Washington, D.C.

Among other honors, Mr. Burns was inducted into the Irish America Hall of Fame in 2013, along with U.S. Vice President Joe Biden. He was nominated to serve as U.S. Ambassador to Ireland by President Donald Trump in 2017 before withdrawing for health reasons.

A Memorial Mass will be held at St. Edward's Catholic Church in Palm Beach on Friday, August 20, at 11:00 a.m.