A student-produced YouTube series brings BC hoops to China

Internet-based highlight shows for college basketball teams are nothing new—but not many are narrated in Mandarin, China's most widely spoken dialect. 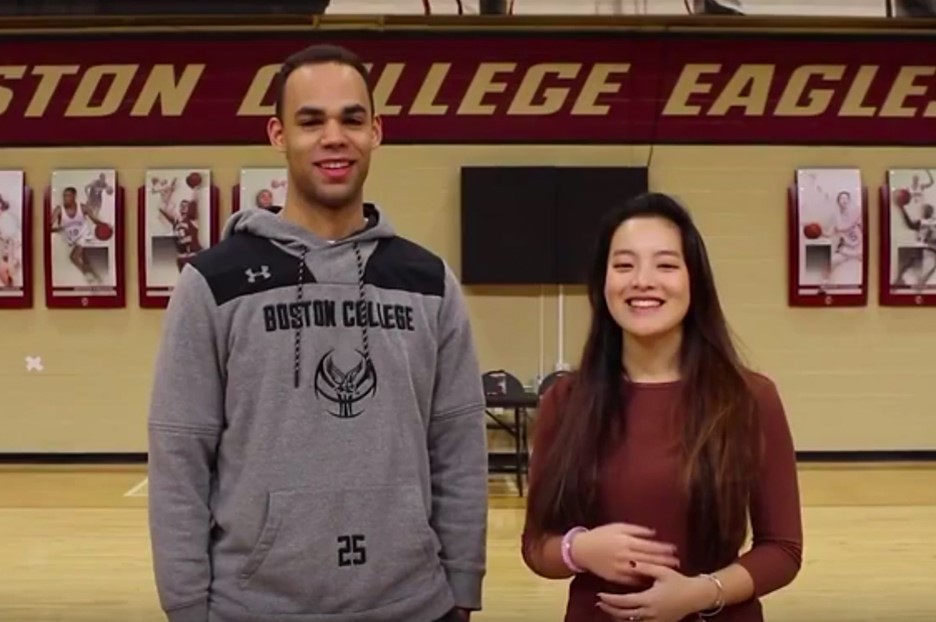 Wang, a Shanghai native majoring in communication, said she had always wanted "to introduce BC basketball to people in China, but never had a chance. This was the perfect opportunity."

Chatman learned Mandarin as part of his two-year mission in Taiwan with the Church of Jesus Christ and Latter-Day Saints prior to enrolling at BC. It is the language he primarily speaks at home with his wife Chelsea.

"It's always special anytime I have the opportunity to speak the Mandarin language, knowing the struggles it took to learn it," Chatman said. "This is a fun opportunity for me to share BC basketball with my Mandarin-speaking friends in Asia, the U.S., and many others."

Two episodes—subtitled in English—were released prior to the semester break, with Wang and Chatman discussing the team's recent games (video clips of the Eagles in action were included) and offering a preview of upcoming contests.

"This is a unique opportunity to promote Boston College men's basketball's brand—locally and internationally," said Mike Laprey, BC Athletics' associate director of communications. "Basketball is immensely popular in China and Boston has a robust Chinese population. We hope this is a way to combine all of these elements in a positive way and introduce BC men's basketball to a new population of fans."

"Mandarin Minute" is available via the BC Athletics YouTube channel.