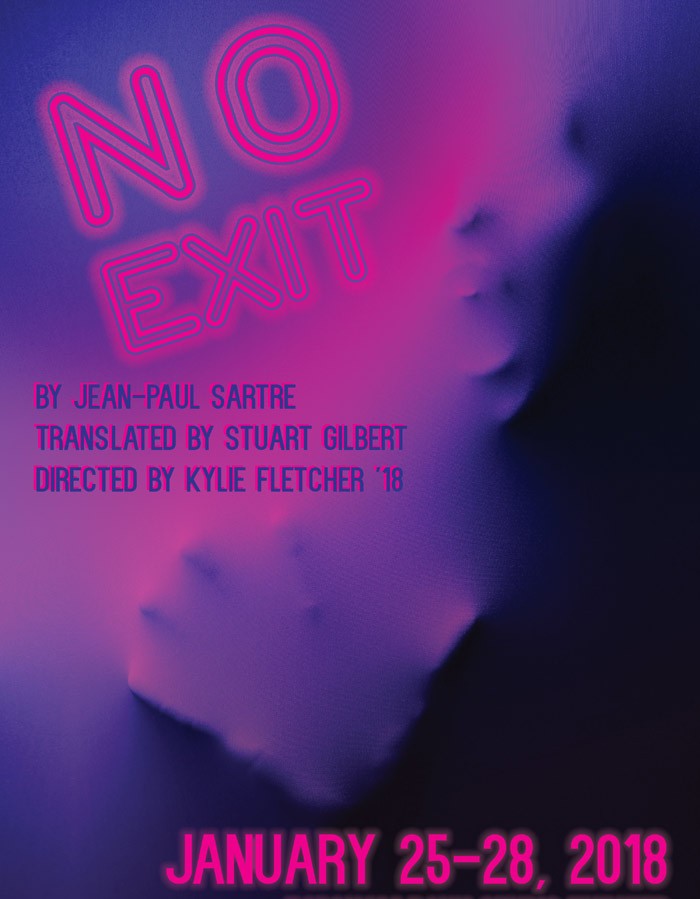 Kylie Fletcher ’18 directs the work, its premise summed up in Satre’s famous quote, “Hell is other people.” The play references his ideas about the struggle of being made to see oneself from the perspective of others. Its three main characters are locked together for eternity in a hideous room: bricked-up windows, lights that can never be turned off, no mirrors – and no exit. They grapple with their limited options to interact within their imprisonment, face each other as they really are, and in turn become reflections of each other.

“No Exit” is presented by special arrangement with the Societe des Auteurs et Compositeurs Dramatiques, Paris.

Two original works by undergraduate student playwrights will be staged in “New Voices 2018,” directed by Professor of Theatre Scott T. Cummings and presented Feb. 15-18 in the Bonn. In “The Things We Do,” an existential mystery by Taylor Badoyen ’19, three strangers arrive at an unusual gate and try to figure out what would make them worthy of passing through. Junior Michael Quinn’s “Get It Together” is set at a holiday house party, where Harold and Mary share an encounter that makes for a night they might forget but can never undo.

Another student-directed play, Diana Son’s “Stop Kiss,” will be performed in the Bonn March 22-25. Directed by senior Taylor Tranfaglia, “Stop Kiss” – described by Variety as “poignant and funny” – centers around Callie and Sara, who meet and unexpectedly fall in love. Their first kiss provokes a violent attack that transforms their lives in a way they could never anticipate. “Stop Kiss” is presented by special arrangement with Dramatists Play Service, Inc., New York.

From marauding pirates and jungle tyrants to unwilling comrades and unlikely heroes, “Peter and the Starcatcher” – which will run April 25-29 on the RTAC main stage – playfully explores the depths of greed and despair, as well as the bonds of friendship, duty and love.

Associate Professor of the Practice of Theatre Luke Jorgensen directs the play, written by Rick Elice with music by Wayne Barker. A grownup prequel to “Peter Pan,” based on the children’s novel by Dave Barry and Ridley Pearson, the story concerns a young orphan and his mates who are shipped off from Victorian England to a distant island ruled by evil King Zarboff. The journey becomes a thrilling adventure when the ship is taken over by pirates whose leader is determined to claim a mysterious trunk and its treasure of a powerful celestial substance in the captain’s cabin. “Peter and the Starcatcher” is presented through special arrangement with Music Theatre International.

Ticket prices (service fee included) for these productions are $17 for adults; $12 for BC students (with valid ID), faculty and staff (one ticket per ID), and seniors. For performance times, information on casts and production teams, and other details viist the Robsham Theater Arts Center website.