Milestone for a maestro

A celebrated maestro at the Heights, conductor John Finney is marking a quarter century as director of the University Chorale of Boston College, a role he performs in addition to his long tenure at the helm of the Boston College Symphony Orchestra. Finney, named Distinguished Artist-in-Residence at BC in 1999, also is recognized as one of the most important musicians in the Boston area.

In celebration of his silver anniversary, plans are in the works for the groups to perform at Boston Symphony Hall next spring. Finney’s predecessor, C. Alexander Peloquin, also conducted a concert there after his own 25 years as Chorale director.

Earlier this month, Finney wielded his baton at “Christmas on the Heights," the ensembles' annual holiday concerts, which have a loyal fan following and traditionally are sold out.

He reflects on his career in the following conversation with Rosanne Pellegrini of University Communications, which is accompanied by images of the December 1 Christmas concert in Trinity Chapel. 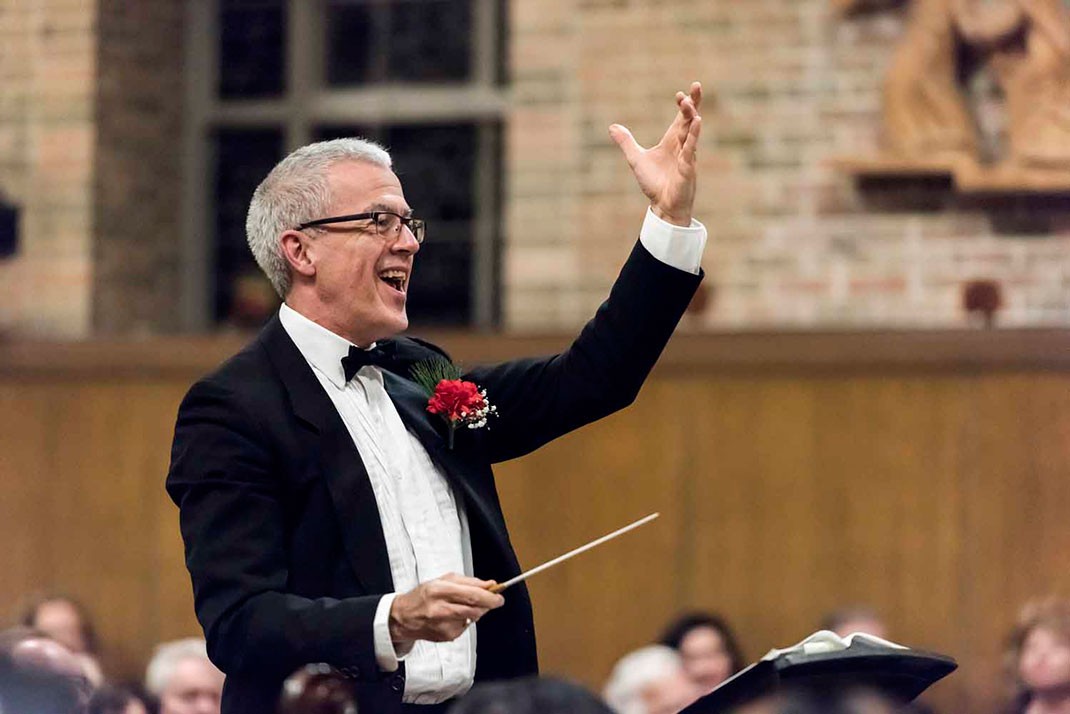 “Christmas on the Heights” is one of the most popular holiday events on campus, enhanced by its setting in Trinity Chapel.

Trinity Chapel is beautiful and spacious, and the acoustics in the chapel are perfect for choral and orchestra music. The sound of the full Chorale and Orchestra, coupled with the sound of the chapel’s excellent pipe organ, is absolutely glorious.

So much beautiful music. Do you have any favorite selections?

Our Christmas concerts include music of many different styles, and I treasure every selection. I love the intricacies of “For unto us a child is born” and “Hallelujah” [from Handel’s “Messiah”], the excitement of the “Trepak” from Tchaikovsky’s “Nutcracker,” the serenity and majesty of Biebl’s “Ave Maria,” the crystal-clear sound of the Ukrainian “Carol of the Bells.”  And of course I adore the traditional Christmas carols where the audience sings with us, filling the chapel with joyous sound. 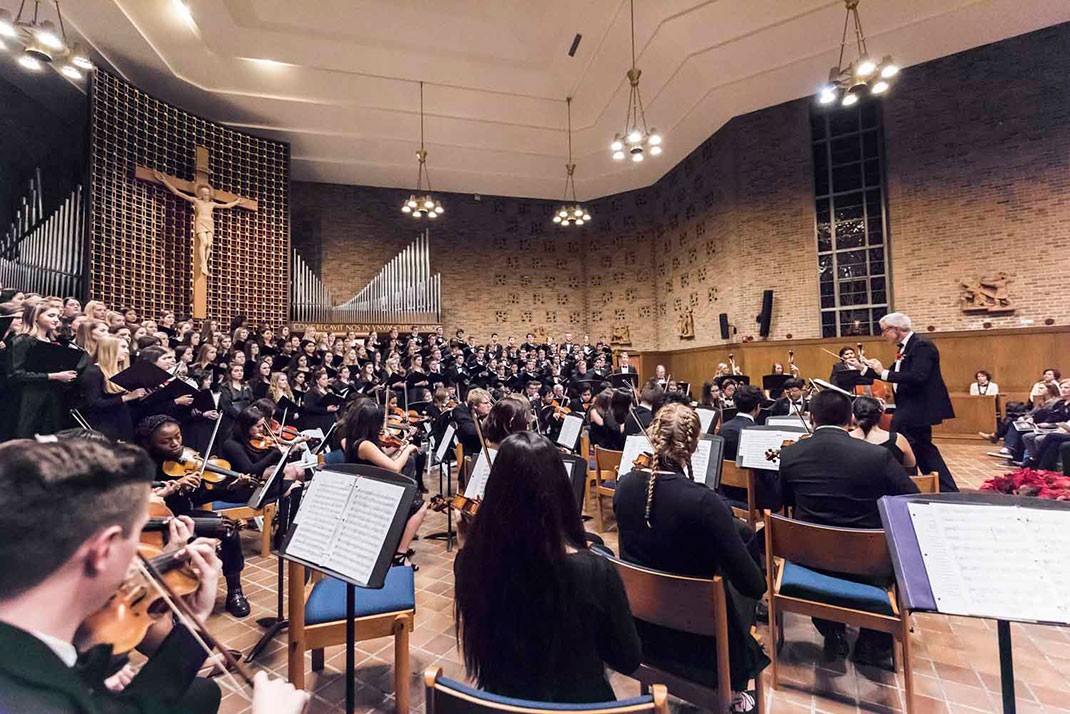 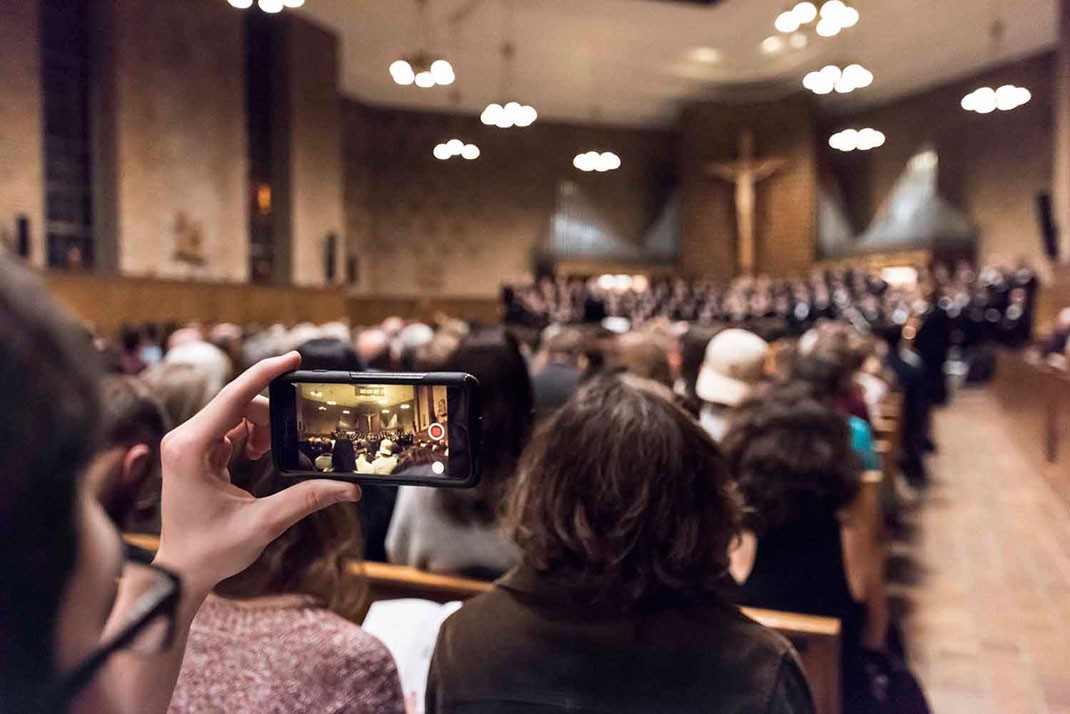 Both the Chorale and Symphony Orchestra appeared in concert at Boston’s Symphony Hall as part of the University’s Sesquicentennial anniversary in 2013—a performance in a world-class venue as part of an important milestone in Boston College history.

It is no secret that Symphony Hall is one of the greatest concert halls in the world, and it was an incredible honor for our ensembles to perform there. The experience of making music on the stage of Symphony Hall is unparalleled; the sound of every voice and every instrument is so beautifully enhanced by the superb acoustics that every performer on the stage is encouraged to sing and play at the highest level of musicianship. The view from the stage is awe-inspiring, as you realize that your sound is reaching every member of the vast audience. 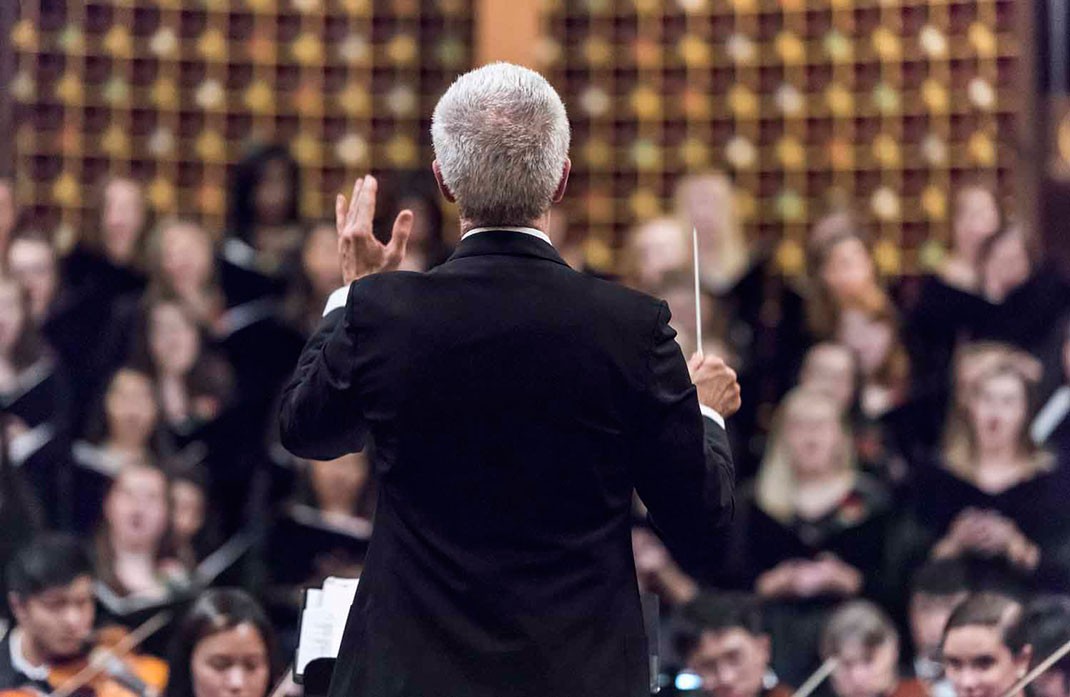 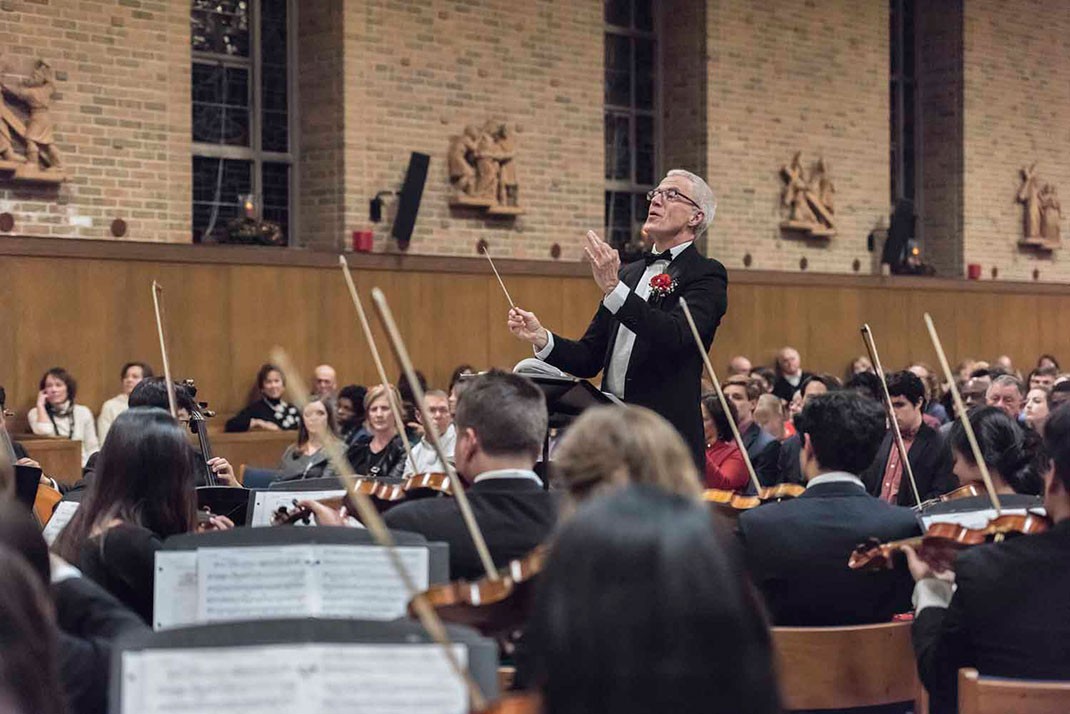 You've led the Chorale on international travels, including trips to Ireland, Spain, and Rome—where you performed for, and had an audience with, Pope John Paul II. You've appearned in some of the world’s most famous cathedrals and other venues. What are your fondest memories?

During every one of the trips the Chorale has taken, we have had the opportunity to perform in magnificent cathedrals, and those experiences are always amazing. I remember the Chorale’s singing “Come, Thou Fount of Every Blessing” in the cathedral in Galway, Ireland. The final note reverberated for nearly 10 seconds in the dome of the cathedral, and it would be hard to imagine a more angelic sound.

Singing in the Basilica of St. Peter in the Vatican City is an overwhelming experience, and we were so fortunate in 1997 to be able to sing at a private audience with His Holiness Pope John Paul II.

The Chorale often performs in smaller parish churches, and one particularly memorable concert took place in the small Jesuit church in Budapest. The church was filled to capacity, and the audience was so enthralled with the Chorale’s singing that their applause would not stop until we offered an encore.

The audiences at our Chorale performances in Europe are so warm and generous with their response. I think they are always delighted to see a large group of young students from an American college, singing beautiful music with great conviction.

This is a milestone anniversary celebration. What do you find most rewarding, inspiring and enjoyable about your work with these BC student groups?

The students in the Chorale and Orchestra are immensely talented, enthusiastic, and committed. At every rehearsal I am buoyed up by the energy they bring to their music-making, and their eagerness to learn as much as we can possibly learn in the time we have together. 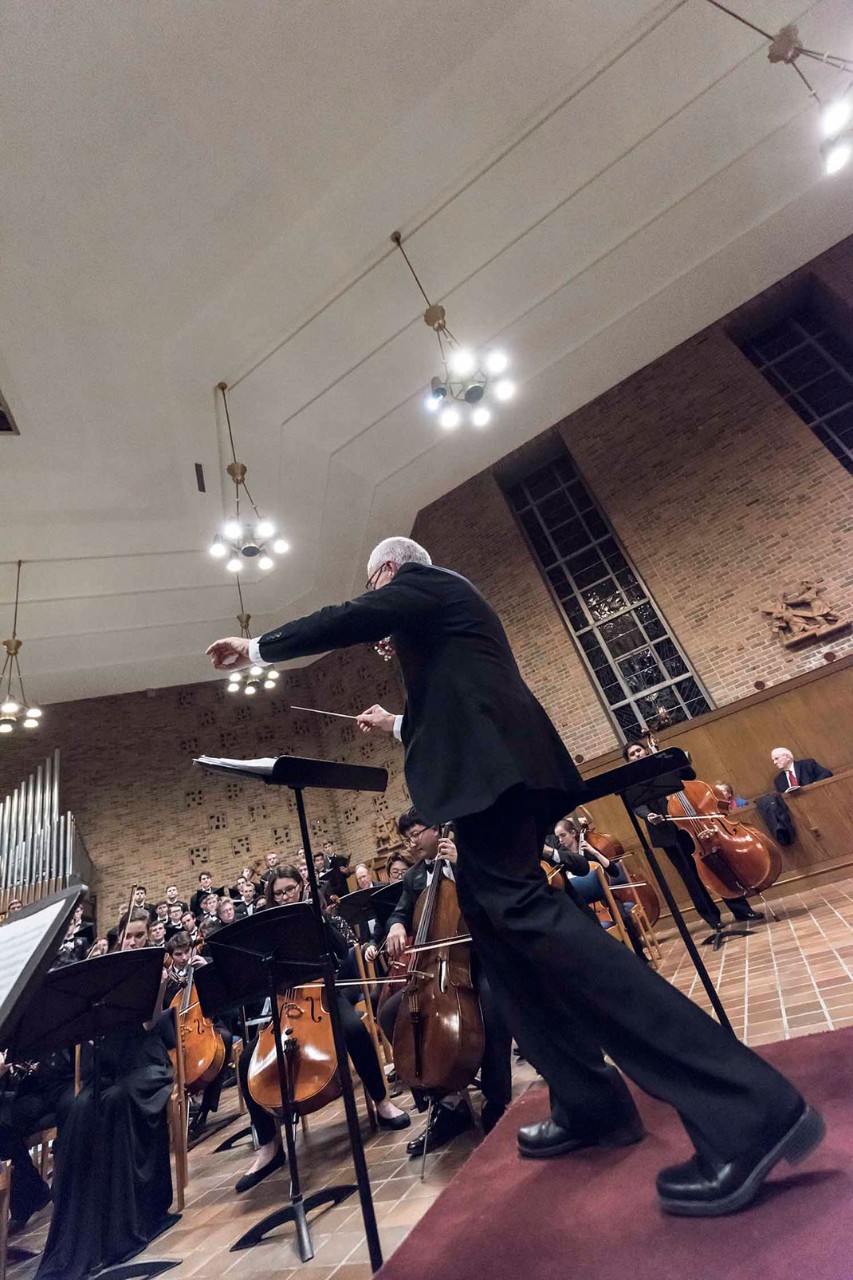 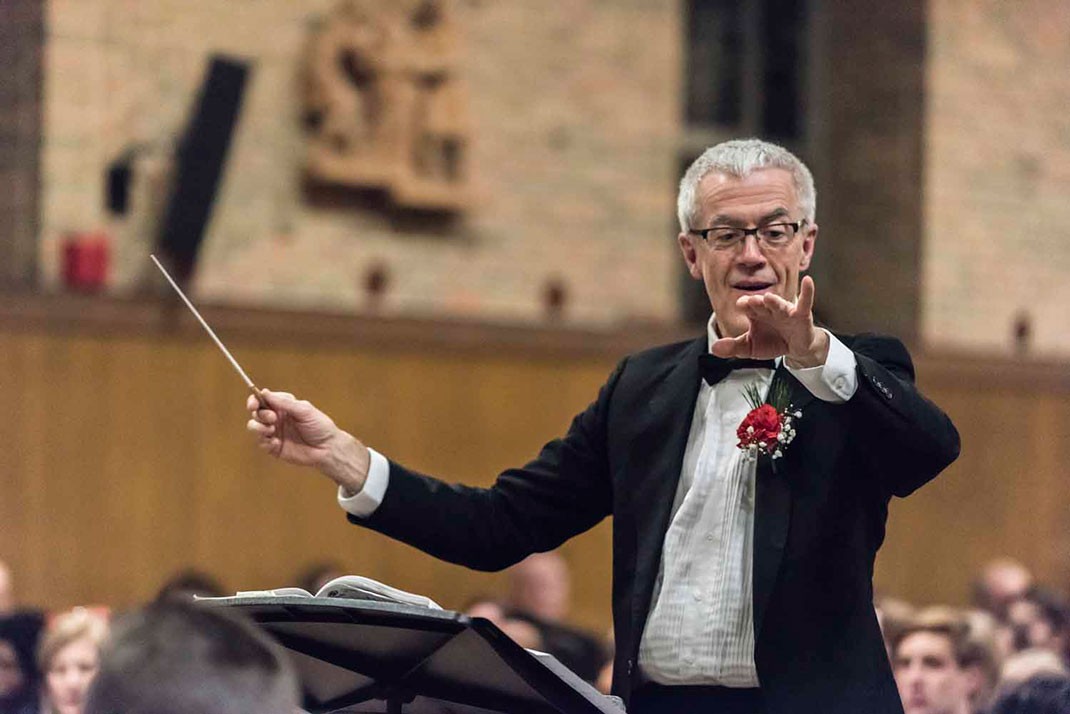 What do you hope that the student musicians take away from their experiences? How does their participation complement their academic experience at BC?

One of my primary goals has always been for the Chorale and the Orchestra to perform music of the highest quality, and at the highest possible level of excellence. My hope is that these student musicians experience a great sense of accomplishment and pride when they have achieved a fine performance of a concert which they have so carefully rehearsed.

I firmly believe that each student’s academic work is greatly enhanced by the heightened mental acuity required in singing complex choral music as part of a large chorus, or playing complex instrumental music as part of a large orchestra. I also feel that for each of these talented singers and instrumentalists, performing with a large ensemble helps to develop solid interpersonal skills as they strive to work together with their fellow musicians toward a common goal. 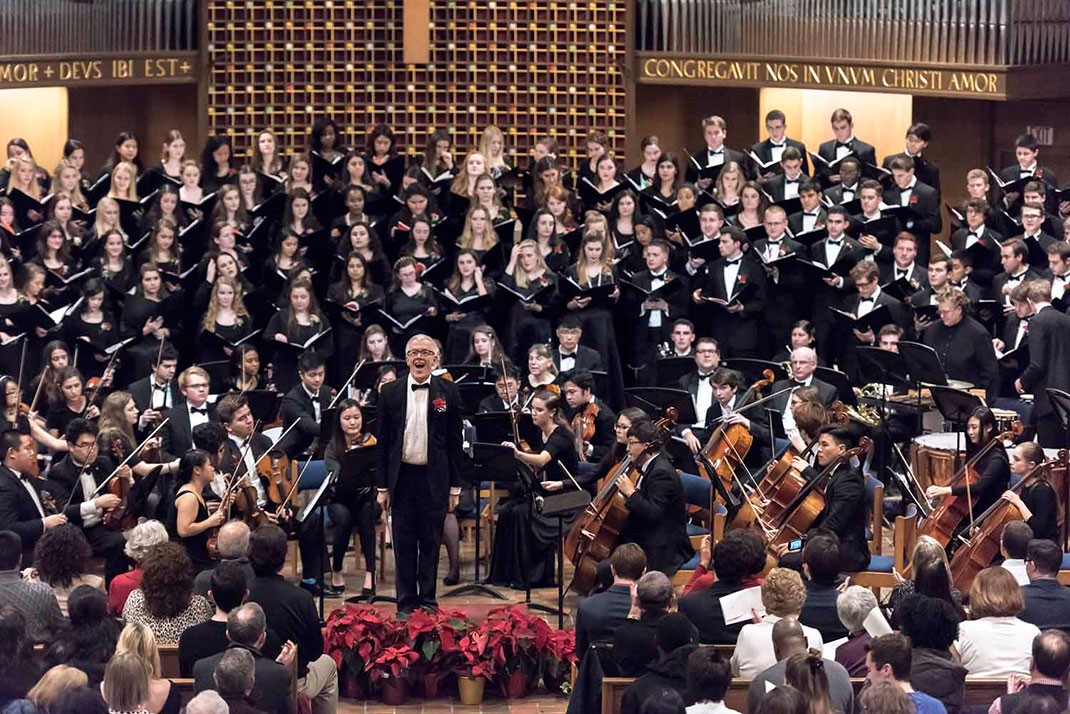