An exhibit co-curated by a BC alumna promotes healing in the aftermath of tragedy.

Boston College alumna Catherine Lamkin '77, co-curator of "The Holy City: Art of Love, Unity and Resurrection," spoke at the exhibit's opening at the Theology and Ministry Library. (Photos by Lee Pellegrini)

In the aftermath of the 2015 shooting that left nine people dead after Bible study in Mother Emanuel African Methodist Episcopal Church in Charleston, SC, a group of artists turned to the familiar tools of their craft as a way to pay tribute to the victims, encourage healing, and provoke thoughtful discourse.

Nearly a year later, “The Holy City: Art of Love, Unity and Resurrection” an exhibition of more than 60 original works—including quilts, dolls, paintings, and pottery—opened in a pop-up gallery in Charlestown. According to the organizers, visitors from 15 countries viewed the exhibition, many of them visibly moved and tearful.

Sixteen quilts and two framed illustrations from that exhibit are now on display at the Theology and Ministry Library on Brighton Campus through April 20. "The Holy City: Art of Love, Unity and Resurrection” exhibit at BC coincides with Black History Month and the Season of Non Violence.

Speaking at the Feb. 8 opening, exhibit co-curator Catherine Lamkin, a 1977 alumna and resident of Charleston, recalled the day of the mass shooting and the extreme sorrow that followed. Lamkin knew four of the Emanuel Nine—as the victims are often called. Her daughter’s close friends lost a mother and grandmother to the violence.

Lamkin said working on this exhibit and watching visitors respond to it, showed her that “art heals.”

Lamkin is a master art quilter whose work has been exhibited by the African-American Civil War Museum and the Historical Society in Washington, D.C., the San Francisco Museum of the African Diaspora, and the American Folk Art Museum in New York City. 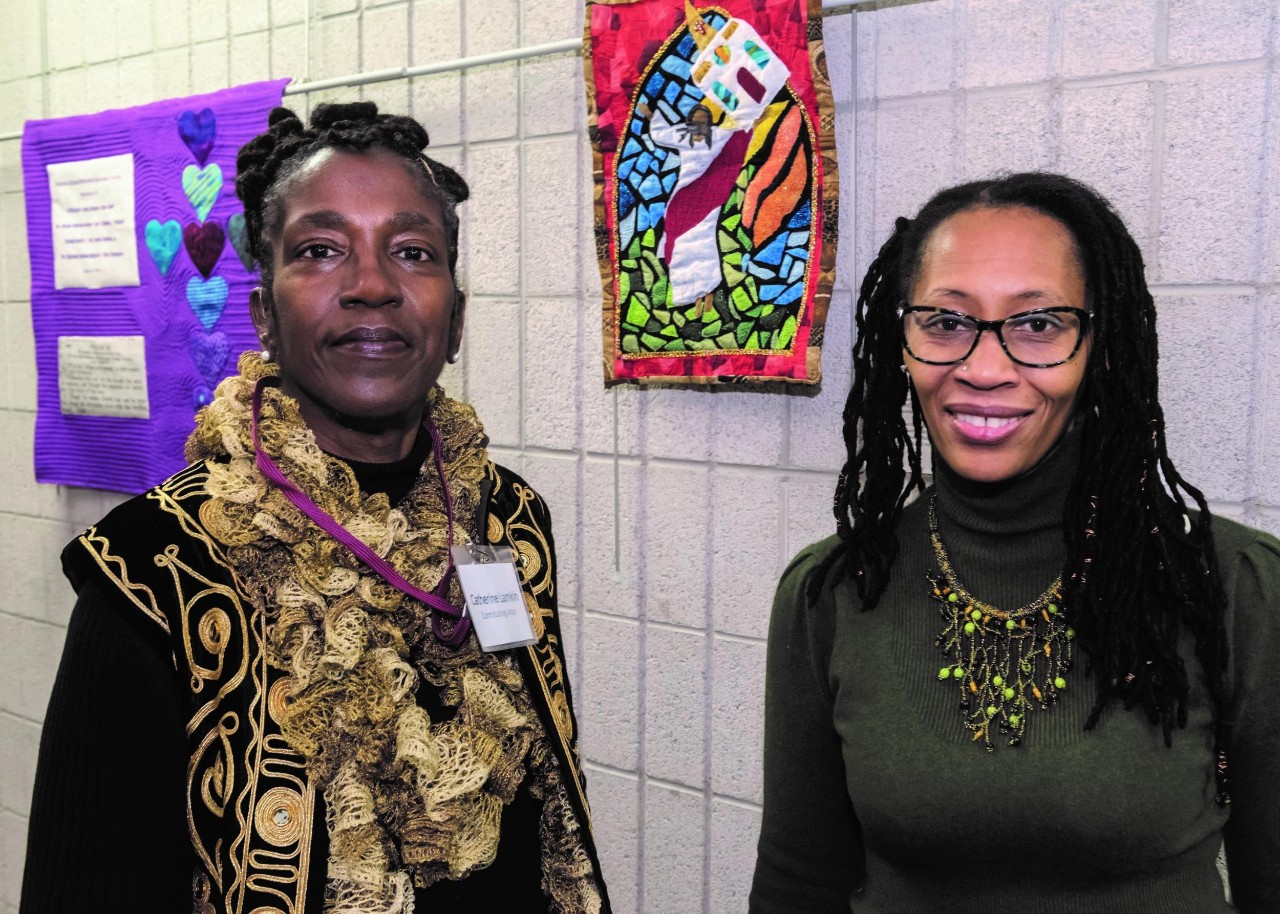 Co-curator Catherine Lamkin (left) poses with artist Kimberly Love Radcliffe, whose quilt "A Window to My Father's House" is part of the exhibit.

Many of the quilts in "The Holy City” exhibit strike themes of forgiveness, healing, and sorrow. The Emanuel Nine are represented on several quilts as hearts, doves, and crosses.

Lamkin’s quilt, titled “Sweet Hour of Prayer: Praying for Peace,” incorporates the colors of Mother Emmanuel church, purple and gold. Each of victims’ names is stitched onto the quilt along with a cross and hands clasped in prayer. The Emanuel Nine are represented by small shells sewn onto the fabric.

Tooreah (Cookie) Washington, the exhibit’s co-curator, has two quilts in the BC exhibit: “Black Madonna” and “Grieving for the Holy City.” In the latter, nine peace medals are suspended from the top of the quilt, along with the words “hope.” In the waters depicted at the bottom of the quilt are “former things that will have passed away.” Sewn into the waters are beads that spell out words such as “prejudice,” “hate,” and “bitterness.”

Lamkin called a quilt titled “And the Angels Cried” by Aisha Lumumba a favorite. The quilt is set on swirls of green and blue and features three angels with bowed heads and closed eyes. The artist sewed clear beads on each of the angels’ faces to represent their tears.

The works in “The Holy City” exhibit were created by members of the Passages Artist Collective, an assembly of fine artists working in diverse media to tell the stories of the global African diaspora. Their works, sometimes mournful, sometimes celebratory, sometimes defiant and often hopeful, provoke the viewer to deep thought and spiritual awakening about shared history and humanity.

The presentation of “The Holy City” at Boston College is sponsored by Boston College Libraries, School of Theology and Ministry, and the Thea Bowman AHANA and Intercultural Center.