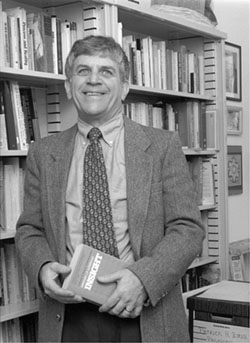 Insight and Beyond was a two-semester course given at Boston College by Professor Patrick Byrne of the Philosophy Department. The course was a comprehensive examination of Bernard Lonergan’s magnum opus, Insight: A Study of Human Understanding, as well as certain texts that represent key developments in Lonergan’s thought after the publication of Insight.

This course and its video recording were undertaken in the hope of providing beginners (and perhaps also advanced scholars) with entry points and clarifications of Lonergan’s often difficult but valuable contributions. The video recordings of the lectures and student discussions are being made available to the larger community of those interested in exploring Insight.

The course was originally intended also to explore the developments in Lonergan’s post-Insight works on meaning, interpretation, history, ethics, values and religion in the second half of the course. However, class discussion of the 20 chapters of Insight itself required nearly the entirety of the two semesters.

All students shown in this series of video presentations have given their explicit permission to appear in them.

The Lonergan Institute is deeply indebted to Tim Lynch, retired professor of philosophy at Queens University in Belfast, Northern Ireland, for his tireless work in transcribing the classes. Tim wishes to thank Susan Legere of the Lonergan Institute and his son, David Lynch, for their technical assistance throughout the process.

The lectures and PowerPoint (PPT) slides from the course are being made available online for anyone interested in Lonergan’s thought through a video platform called Panopto©, which recreates the original lecture and class discussion. This format makes it possible to watch the video of the class session and also simultaneously view the PPT slides used to illustrate it. Each class session has been divided into two (2) parts. There is a separate link for each part of each class session.

We have also provided outlines of the main topics covered during each class session. Times for key points are also included in the outline, so that you can scroll ahead to that topic if you so desire. The link to the outline for each session is located alongside the corresponding link to the Panopto recording for that session.

In addition, Dr. Timothy J. Lynch, Lecturer emeritus in the School of Philosophical Studies at The Queen’s University of Belfast, has been preparing transcriptions of the class lectures. Links to the transcripts that have been completed are also provided, along with links to the video recordings of the sessions and the outlines.

The class session video is in the upper left corner, and the corresponding PPT slides to the right. This initial view is the standard view.

There are other options. You can also expand either the video or the PPT slide to fill the entire screen.

You can also click anywhere on the scroll bar to advance. Times from the beginning of the video will appear, and you can scroll to the time in the class session that you desire.

The zipped audio and PowerPoint files allow for a one-time download of the entire course in bulk.

At this time, video files are not available for download. It is recommended that you view video files through the Panopto streaming links. If your bandwidth restrictions prevent you from streaming, please contact us and we may be able to mail you a flash drive or DVD with the lectures.