BC physicists create a metal oxide with a honeycomb lattice that may advance quantum computing.

A team led by Assistant Professor of Physics Fazel Tafti has created an elusive honeycomb-structured material capable of frustrating the magnetic properties within it in order to produce a chemical entity known as “spin liquid,” long theorized as a gateway to the free-flowing properties of quantum computing, according to a new report in the Journal of the American Chemical Society.

The first-of-its-kind copper iridate metal oxide– Cu2IrO3 – is one where the natural magnetic order is disrupted, a state known as geometric frustration, said Tafti, a lead author of the study Cu2IrO3: a new magnetically frustrated honeycomb iridate, reported in the online version of the Journal of the American Chemical Society.

Boston College researchers report their 'exchange reaction' pictured here, swapped copper for sodium to produce the first oxide of copper and iridium with a honeycomb structure scientists see as a gateway to the free-flowing properties of quantum computing. (Credit: Fazel Tafti)

The copper iridate is an insulator – its electrons are immobilized in the solid – but they can still transport a magnetic moment known as “spin”. The transport of free spins in the material allows for a flow of quantum information.

The Kitaev model, proposed in 2006 by Cal Tech Professor of Physics Alexei Kitaev, states that a hexagonal honeycomb structure offered a promising route to geometric frustration and therefore, to quantum spin liquid.

Only two honeycomb lattice have been successfully developed in an attempt to fulfill Kitaev’s model: a lithium iridate (Li2IrO3) and a sodium iridate (Na2IrO3). Yet both fell short of achieving an ideal spin liquid due to magnetic ordering, said Tafti, who co-authored the paper with Boston College post-doctoral researchers Mykola Abramchuk and Jason W. Krizan, BC Adjunct Professor of Chemistry and Director of Advanced Chemistry Laboratories Kenneth R. Metz, and Harvard’s David C. Bell and Cigdem Ozsoy-Keskinbora. 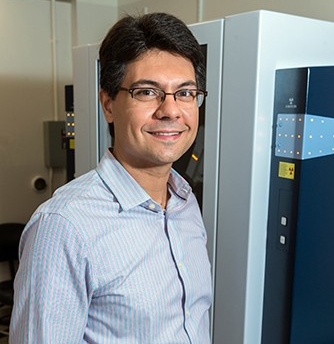 Tafti and his team turned to copper due to its ideal atomic size, which is between lithium and sodium. Their studies in x-ray crystallography found subtle flaws in the honeycombs formed in the lithium and sodium iridates. The team swapped copper for sodium in what Tafti termed a relatively simple “exchange” reaction. The effort produced the first oxide of copper and iridium, Tafti said.

A decade after the original prediction of quantum spin liquid on a honeycomb lattice by Kitaev, the young team of scientists from Boston College succeeded in making a material that almost exactly corresponds to the Kitaev model, Tafti said.