Researchers in the field of aging commonly work with C. elegans, a microscopic worm and model organism. (Credit: Weerapana Lab) 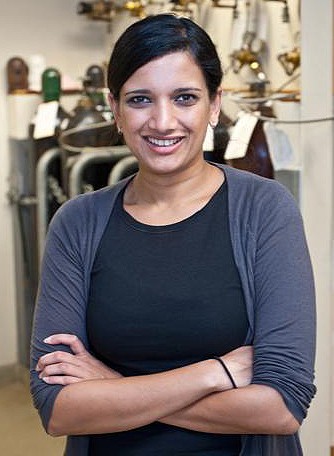 New clues to the cellular damage that results from age-related increases in oxidative stress are revealed in studies by BC chemist Eranthie Weerapana.

The research, funded by grants from the National Institutes of Health, advance her exploration of how cellular pathways and proteins contribute to cancer and neurodegenerative diseases.

“One of the major areas of focus of my research group is to understand the effects of oxidative stress on biological systems,” said Weerapana, an associate professor of chemistry. “There are many diseases that are characterized by increased oxidative stress, including cancer and many neurodegenerative diseases associated with aging, such as Alzheimer’s and Parkinson’s.”

Weerapana tries to identify the proteins that are damaged due to the increase in oxidative stress and the potential pathological consequences.

“In many of these diseases, cells produce reactive oxygen species,” said Weerapana. “These are highly reactive radicals that can damage DNA and proteins in the cell with downstream functional consequences. Our goal is to understand what bio-molecules are affected; specifically, our interests lie in understanding how oxidative stress affects proteins and their downstream functions.”

In a study published in the journal Cell Chemical Biology, Weerapana and colleagues from the University of Massachusetts Medical School reported the identification of two proteins with direct links to longevity in C. elegans, a microscopic worm and model organism commonly used by researchers in the field of aging.

The team focused on proteins containing cysteine, an amino acid that can be compromised by oxidation, with the goal of identifying and subsequently silencing cysteine-containing proteins with effects on the lifespan of the worm, Weerapana said.

The worm model employed by the team has been genetically modified to silence, or “knockdown,” an insulin receptor, which has been shown in earlier studies to increases longevity in the organism. By analyzing the proteomes of wild-type and knockdown worms, the team hoped to identify other proteins that mediate lifespan extension.

“Knocking down the insulin receptor activates pathways that increase lifespan,” said Weerapana. “So we wanted to identify downstream protein activities that could be targeted to further increase longevity in these worms.”

The team used a method called cysteine-reactivity profiling to identify 40 proteins that are differentially regulated in the wild-type and mutant worms. They showed that knocking down two proteins – known as LBP-3 and K02D7.1 – caused significant increases in the lifespan of these worms. LBP-3 knockdown accounted for a 23 percent increase and K02D7.1 knockdown accounted for a 36 percent increase in longevity.

The findings demonstrate that cysteine-reactivity profiling can be used alongside traditional methods like genomics and transcriptomics to identify proteins that regulate longevity in C. elegans – a crucial, early step in research that ultimately seeks to combat age-related diseases in humans. Future studies would try to pinpoint how the manipulation of these particular cellular pathways increases longevity, Weerapana said.

In addition to the NIH, The Smith Family Foundation funded Weerapana’s work on the project.

In an earlier study, published in June in Cell Chemical Biology, Weerapana and colleagues at the University of California, Berkeley, and the Medical College of Wisconsin explored potential protein targets of cellular nitric oxide. Increased production of nitric oxide in cells has been tied to cancer and age-related neurodegenerative diseases.

Specifically, the researchers aimed to develop a method to look at how nitric oxide affects protein function, again focusing on cysteine-containing proteins. Upon identifying protein targets of nitric oxide, they sought to evaluate the functional consequences of this protein modification.

“One challenge in the field of protein oxidation is the instability of the oxidized protein species, which makes it difficult to identify using traditional methods,” said Weerapana. “This has limited the number of oxidized proteins that we have been able to identify in different disease models.”

In this study, the group developed a chemical-proteomic approach to identify protein targets of nitric oxide, leading to the discovery of two previously uncharacterized cysteine residues that regulate protein function when cellular nitric oxide levels are increased.

In addition to the NIH and Smith Family Foundation, the Damon Runyon Cancer Research Foundation funded Weerapana’s work on the project.