An evocative poem by Associate Professor of English James Najarian has won the sixth annual Frost Farm Prize for metrical poetry. More than 600 entries were submitted to the competition for the prestigious award, which was presented to Najarian's “The Dark Ages,” a poem that likens a mother's loss of memory to the period after the Roman departure from Britain.

"I am very happy to have won this prize and to be able to visit the Frost Farm,” said Najarian, who was invited to be a featured reader at the Hyla Brook Reading Series at the Robert Frost Farm in Derry, N.H., in June, kicking off the second annual Frost Farm Poetry Conference.

“I have to give credit to my colleague [Professor] Robin Fleming of the History department, whose brilliant, readable Britain After Rome spurred me to complete the poem that I had already been working on," Najarian added. 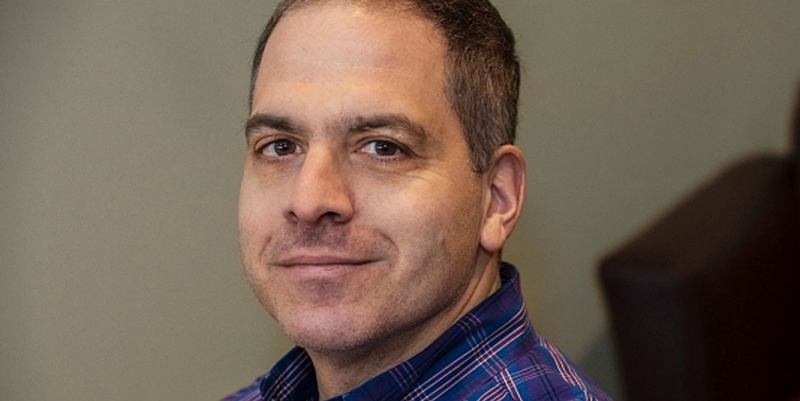 “‘The Dark Ages’ participates in what has become, over the last several decades, a recognizable sub-genre of the elegy, even if it is an elegy of death-in-life: the Alzheimer’s poem. This poem differs from all others on this theme I have ever read, in its successful use of an extended metaphor, in which the poet implicitly compares the mother’s loss of memory to the aftermath of the Roman departure from Britain,” Rothman said.

He calls the work “compelling, masterful, not only technically adroit but also thematically fierce and focused, and emotionally profound: an intense yet also measured depiction of destruction and grief. The poem’s six stanzas of blank verse, each nine lines long, alternate starkly between painfully clear-eyed description of the mother’s decline, and comparably evocative reimagining of the advent of ‘the dark ages.’ The personal and the historical merge in ways that illuminate both.”

Rothman added: “With more than 600 entries, this year’s submissions to the Frost Farm Prize presented a tremendous range of subjects, themes, tones, styles and techniques. After spending many hours with them, my overwhelming impression is that hundreds upon hundreds of poets continue to care about craft.”

Najarian, who teaches poetry and prose at BC, is widely published. He directs the doctoral program in English and edits the Religion and the Arts journal. A specialist in Romantic and Victorian poetry and nonfiction prose, his research interests include gender and sexuality in literature, poetic influence, religion in literature and book production.

In 2015, the Association of Literary Scholars, Critics and Writers honored Najarian with its Stephen J. Meringoff Writing Award in Poetry for his works: “Kleptomania,” “From the Armenian Quarter,” and “The Frat Boys.”

Frost Farm Poetry's mission is to support the writing and reading of poetry, especially metrical poetry. The Hyla Brook Poets started in 2008 as a monthly poetry workshop. The following year, its reading series launched with presentations by both emerging poets and luminaries. The Frost Farm Poetry Prize for metrical poetry was introduced in 2010; its poetry conference began in 2015.

For years, my mother shuttled from her garden

to the stove, from barn to sewing room to sons,

Then came the silences. Was she tired? Bored?

She hovered in her kitchen the whole day.

Skillets and glassware tumbled from her hands,

her face a cast of lead. Her garden shrank

We did not plow it for the coming year.

even before the soldiers were withdrawn.

With the seas unguarded, little was brought in.

The towns dispersed, as townsfolk headed to

the countryside to try the earth. At first,

the city fathers decently tore down

Those who stayed grew barley in the ruins.

She had trouble walking, or rather starting

walking -- her feet seemed bolted to the ground,

the brain not ordering its provinces.

Her kingdom dwindled to a bed and toilet--

a quilt she planned still hanging from the wall,

her life now archaeology around her.

With Rome went every skill. The coarse pots made

in native kilns, declined, then disappeared.

Foundries halted, and with them nails vanished.

The people foundered barefoot in the mud

as shoes could not be made-- or coffins either.

The dead were thrown directly in the ground.

dwindled to a pasture, York a marsh.

In daylight she may keen for hours, unaware.

All night she shrieks, but does not hear her sounds.

She grips a toy she’s had since she was small,

a drowsy chimpanzee whose eyelids close.

Nurses have put her in a safe low bed;

half-buried in her sheets, she is a baby

lost in a little boat. She knows my name,

but wails, and can’t say why. At times I can

The towns and villages have emptied out.

We gather in our clans amid the dregs,

atop a hill-crest or a crumbled fort,

dwelling among the swine we kill each fall,

gorging because we cannot let them waste.

Our women scrounge for bits of bead and bronze.

They roast our gritty roots right in the fire,

or cook in cauldrons dug from ancient graves,