Kevin Barry, the Burns Visiting Scholar in Irish Studies for this semester, is one of Ireland’s more highly regarded fiction writers to emerge this century. The author of two novels, Beatlebone and City of Bohane, and two story collections – There Are Little Kingdoms and Dark Lies the Island – Barry has won the Rooney Prize for Irish Literature, the Goldsmiths Prize, the IMPAC Dublin City Literary Award, the Sunday Times EFG Short Story Prize and the European Union Prize for Literature, as well as a Lannan Foundation Literary Award. His stories and essays have appeared in the New Yorker, Granta, Tin House, and many other journals.

On April 12, Barry will present the Burns Scholar Lecture, “A Writer’s Apprenticeship,” at 4:30 p.m. in the Burns Library Thompson Room. He recently spoke with Sean Smith of University Communications.

What prompted you to accept the invitation to be the Burns Scholar?

Well, it’s always a great and necessary thing for a writer to get out of the house – to hear some new voices, new ways of speaking. I’m not a stranger to Boston College by any means, having visited a few times here over the years, and I’m delighted to have the opportunity to stay for a few months. For one thing, you get a proper winter in Boston. In Ireland, all the seasons have sort of morphed into one; it never gets very hot or very cold, it’s just kind of grey and wet and a bit dreary all the time. Not very interesting.

Of course, I was impressed by BC on my previous visits, especially the depth and extent of its Irish literature scholarship. I remember going to the weekly reading of Finnegans Wake held by [Associate Professor of the Practice of English] Joe Nugent, and I was struck by the diversity of the crowd showing up to puzzle through this great and famously impenetrable work by an old Irish dude.

I’ve really enjoyed being able to go to the Burns Library and browsing, for example, the Flann O’Brien collection – to see his original manuscripts, which are sacred texts to me, and even his typewriter. 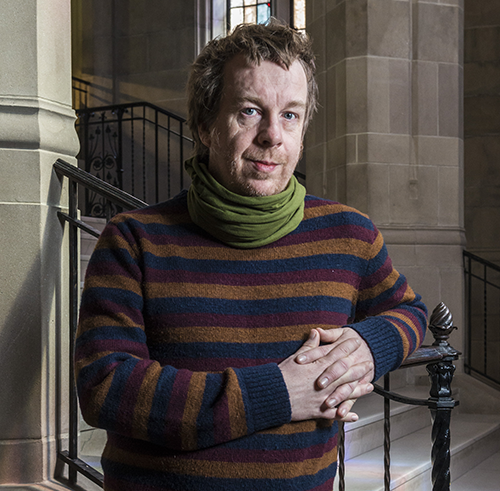 Your new novel – can you give a hint as to how it’s coming along?

I can’t, because I have no idea what it’s about yet! [Laughs] I’m in the very early stages where I’m just doggedly making myself go to the desk every morning and writing. Actually, I am not in the habit of talking out a new project. I usually sneak up on it, as if it were a new and delicate life form, and I don’t want to startle it and send it running into the woods.

A campus with such great libraries as those here BC is an enormously useful environment for a writer. I love the O’Neill Library: It’s like a living Google machine where you can just follow a trail of reading, a trail of books. There’s a lot of reading that goes on before I write; it sets the stage.

Do you follow a certain routine in your writing?

I make it a first-thing-in-the-morning practice. The great Don DeLillo talked about writing as something you should do when you first wake up, when you’re still “puddled in dream melt,” and you’re in touch with the part of the unconscious that fiction and drama come from. That’s why I’m  always telling students in my Fiction Writing Workshop not to go online when they first get up. Get to the page instead.

But you have to find what works for yourself. An hour-and-a-half can be a perfectly good writing day. When I was emerging as a writer, in my 20s, I would have these random bursts of genius at 4 a.m. I’m on a different schedule nowadays.

When did it hit you that writing was something you liked and wanted to do?

I can actually date it: I wrote my first short story, at age eight, the morning after Elvis Presley died [Aug. 16, 1977] – it was based somehow on Elvis’ life. I was always a scrawler, I suppose – certainly I wrote quite a bit of teenage poetry, none of which survived, thankfully.

When I worked in journalism, I wrote about books, films, art, and so forth, so I was always sneaking up on fiction. And then I began writing short stories, and that form kind of remains my first love.

Patience is the ultimate thing you need to become a writer. It takes a long while before emotions and impressions from your life filter into your work. I think what’s rare is to have both a talent for writing and a pragmatic, stubborn sense that makes you go to the desk every day and keep doing it.

Whom, or what, do you consider major influences leading up to when you started writing?

I think what interests you in your late teens and early 20s is formative for a writer. At that age, I liked David Lynch, especially “Twin Peaks”; novelists like Saul Bellow and Philip Roth; and the Hernandez Brothers, who created the comic book "Love and Rockets."

It’s critical to read a lot at that age, and also that’s usually when you have plenty of reading time!

It’s also important to make weird ritual vows. I remember a summer day in 1999 when I just said, “Right, get real, start putting in the work.” I still consider that day to be my “writer’s birthday.”

You must have been pleased by the reception to your first collection of short stories, There Are Little Kingdoms (2007), which suggested the changes taking place in Ireland’s towns and cities – new technology, new sounds, new kinds of relationships, and so on.

It went down well, and I was very fortunate to win the Rooney Prize for Irish Literature. The award is named after Pittsburgh Steelers owner Dan Rooney, so along with the prize you get a Pittsburgh Steelers T-shirt – which, of course, I know I’m not supposed to wear around Boston.

But you didn’t necessarily set out with a collection in mind, right?

A short story collection is a curious beast. As you write the stories, you start to become aware that themes naturally emerge, so you think that perhaps you can build on these and put a coherent collection together. But I’ve found with stories that the rate of production gradually slows down, and the process doesn’t necessarily get easier.

And then you went in a different direction with City of Bohane, a dystopian novel [it takes place in 2053, in a world of minimal laws and technology, chronicling a power struggle among gangs for a western Ireland city]. How did that unfold?

When I was writing that book, I was very influenced by American television drama, shows like “The Wire,” “The Sopranos” and especially “Deadwood” – this seemed to be some of the best storytelling around at that time. They all had to do with who holds and exercises power in a place of uncertain law and order. Basically, they were westerns, which always make for some of the best stories. Bohane is kind of a west-of-Ireland western.

I was writing Bohane at a time when Ireland was undergoing dramatic changes – you’re part of the country you live in, you feel what’s happening. There had been incredible prosperity, a lot of immigration into the country, new energies, new tensions, and then came the unprecedented collapse. It was by sheer luck, not design, that I’d chosen an almost dangerously interesting time to be writing in, and I think some of the mad vitality got into the pages.

I should say that when I’m writing, I’m mainly just trying to have a good time. If I’m having a good time, maybe dear reader will, too.

What’s it been like for you to teach the workshop here?

I’ve done workshops here and there in the past, but never over the period of a full semester. So you get to know the students much better and their various traits and approaches to writing.

It’s been very interesting to talk to them, as people in their late teens and early 20s, about narrative. Writers of that generation have a great sense of visual storytelling, and in talking about a narrative they seem to have a natural sense about how it breaks down into scenes, images, pictures.

That’s why I really like Joe Nugent’s Joycestick project [a virtual reality adaptation of James Joyce’s Ulysses], because it uses that visual component. It makes people think about the nature of storytelling.

People worry about the future of the novel, and the short story, and so on, but I have no worries about storytelling. The fact is, we need stories as part of our lives. They are a fundamental human need, like shelter, food and clothes.

Speaking of stories, you and your wife have quite a unique home back in Ireland: an old police barracks. How did you wind up there?

Well, we had been moving around so much, and finally we decided it was time to find someplace where we really wanted to stay. But it was the height of the Celtic Tiger, and houses in cities were just not affordable. And then we found this old barracks, built in the 1840s by the Royal Irish Constabulary, and it hadn’t been used in 30 years. We needed a place for all the books we’d accumulated, so we thought, “This is it.”

And we moved in, and bit by bit we cleaned it and fixed it up. Win a literary prize, put in some central heating, that kind of thing. But the overhead’s low, and there’s beautiful country out the windows.

My only complaint is there are no ghosts in it. I thought for sure there would some old police sergeant, or maybe an old Fenian, haunting the place. Maybe I just haven’t heard them yet.

The Burns Scholar Lecture is free and open to the public, but registration is required. A link is available here.