A catastrophic event in medieval China holds lessons for our relationship with the environment today, says historian Ling Zhang.

The scenario is a familiar one: Floodwaters ravage communities, causing widespread death and destruction. Questions are raised about authorities’ land management and responses to the disaster. Consequences, for the land and its people, are far-reaching and in some cases permanent.

Hurricane Katrina, the great Mississippi flood of 1927 and similar events in modern history – including the recent crisis at the Oroville Dam in California – often serve as case studies for the complex relationship between man and environment. But Associate Professor of History Ling Zhang finds equally compelling lessons from a disaster in medieval China, and her book on the subject has been recognized by the premier organization in the emerging, interdisciplinary field of environmental history. 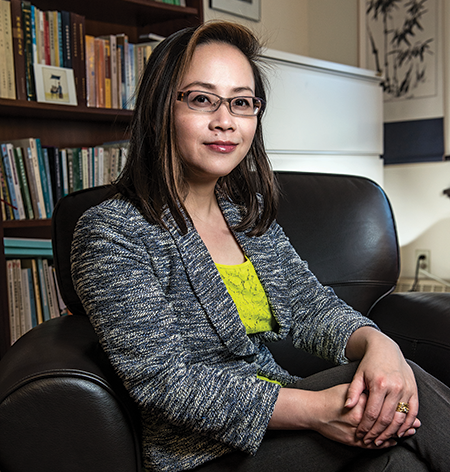 Zhang’s The River, the Plain, and the State: An Environmental Drama in Northern Song China, 1048-1128 has been selected for the American Society for Environmental History’s 2017 George Perkins Marsh Prize as the best book on environmental history. She is the second BC History faculty member to earn the Marsh Prize, along with 2003 recipient Conevery Bolton Valencius.

The book centers on an event in the northeast of China in 1048, when the Yellow River breached its banks. The river drastically changed its course and turned the Hebei Plain into a delta, altering – and in many cases destroying – the lives of millions in Hebei.

Award winners are often known to call an honor “unexpected,” but the sentiment seems entirely appropriate for Zhang, who had considered herself somewhat of an outlier in the environmental history field. In any event, she is gratified by her selection for the Marsh Prize.

“I feel as if I’m accepted by my peers, and that’s something I truly appreciate,” says Zhang, who joined the BC faculty in 2012. “When I started out, I was an economic historian. I never knew there was a field for environmental history, never trained to become part of it, and didn’t have a sense of the fundamental questions or the methodology that characterize the discipline.”

At the outset, environmental history research tended to focus on American issues and events in the “early modern” and “modern” eras (especially from the 18th century on), she says. In recent years, the field has increasingly adopted a more global perspective, although still mainly Western-oriented.

While medieval China represents a point of departure in environmental history scholarship, Zhang says it offers some advantages. Chinese historical records, even from that era, are meticulous and extensive, and thus help offer a detailed picture of Chinese society over many centuries.  Born and raised in China, speaking Chinese as her native language, Zhang is proud that Chinese history and historians offer valuable knowledge about our long-term environmental past, from which scholars of the West and modern eras see meaningful comparisons.

Zhang, who had first learned of the Hebei disaster while working on an economic history of the area, drew on elements of geography, hydraulic engineering and political science, as well as scientific data, to write the book. But she also conceptualized it as something more than an historical event – a drama with three major actors.

“One is the river: What were its hydrological characteristics, and how were these affected by other environmental factors, like climate change, sunspots and earthquakes? Another is the land and its residents: What were the environmental features of Hebei, and how did they change over time? How did the local population interact with the land, and what was the impact?”

The crucial third player in this drama, Zhang explains, is the state – the imperial government of China and its local political and military authorities – which regulated the Yellow River-Hebei complex and had to deal with an unprecedented humanitarian crisis after the flood.

“Everything the authorities did to tame the river not only failed, but actually made things worse,” she says. “The state became trapped deeper in the crisis, and ultimately had to decide which part of the population would bear the burden from river disasters – who would win, who would lose.”

The state faced a credibility problem quite different from those of latter-day authorities, Zhang notes. “The state’s mandate, its political legitimacy, was supposed to come from a benevolent Heaven, which judged the government’s conducts and delivered reward or punishment. So if the Heaven sent down calamity, that normally means the government did not do a good job.  In that case, if the government couldn’t control the river, couldn’t help the refugees, how would it explain that?  This became a real existential crisis for the state.”

Over the next 60 years, the local population was reduced by half, through death or migration. Regional agriculture was ruined, and famine raged, says Zhang: “It’s not uncommon to read about people selling their children for food.” The impact of the flood was felt elsewhere, as silt from the redirected river affected arable land in other areas, and the government expanded its deforestation operations – used to provide materials for water-control projects – to regions beyond Hebei.

In 1128, the Yellow River once again shifted, this time completely away from Hebei. The drama, as such, had ended, but Zhang says the questions it raises still resonate.

“The state couldn’t see beyond its own perceptions and desires, and wouldn’t accept the fundamental constraints of the environmental world,” she says. “As China, the U.S. and other nations confront environmental problems on an even greater scale, how willing and able are we to learn the painful lessons from history?”