'The Other Air Force'

The U.S. is fighting a new kind of propaganda war for the airwaves of the Middle East, according to a new book.

The U.S. is fighting a new kind of propaganda war – one for the airwaves of the Middle East, according to a new book by Assistant Professor of Communication and International Studies Matt Sienkiewicz.

During two years of field research, Sienkiewicz travelled to the West Bank, Palestinian territories and Afghanistan, and spoke to people in various media entities. He found this “other air force” involves give-and-take on the part of the U.S., allowing considerable freedoms to its partners while hoping to encourage an American-friendly discussion of democracy, freedom of expression, and free markets. Sienkiewicz spoke about the project and his new book, The Other Air Force, with Sean Hennessey of University Communications. 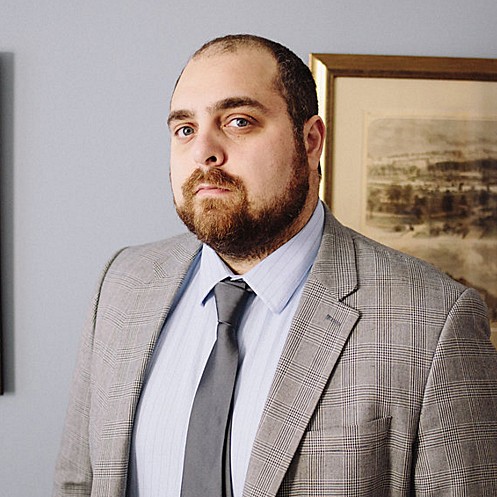 People might be surprised to hear the United States is involved in a propaganda war in the Middle East. What exactly is going on there?

What I found was a different way of approaching what you might call a propaganda strategy. You may be familiar with the concept of “psyops,” the idea that we can psychologically manipulate the minds of either military combatants or populations in other countries by feeding them the right messages. For example, during World War II the U.S. would set up a fake “resister” radio station to broadcast from Switzerland into Germany to influence the population against Nazism. America also did this in Iran during the revolution, putting forth misleading media against the government and claiming it was of local origin.

That’s not what’s happening with the media institutions I’ve studied in the Middle East. Instead, the U.S. is enabling people in the Middle East, in conflict zones, to do their own work to make media and messages that will ultimately reflect well on American values. There are, of course, limitations and restrictions on what the partners produce, but it’s more nuanced than the old “psyops” approach. The U.S. is not trying to trick people as much as it is trying to change the Middle East media system to operate more like a Western one, particularly in terms of competition and profit motives. America looks for entrepreneurs with friendly ideological commitments and supports them in producing creative, competitive media.

It’s certainly propaganda, there’s no question about that, but there’s a collaborative element that, at times, allows for really interesting levels of local creativity, autonomy, and even resistance to American directives. So instead of having the CIA making the propaganda, now we have local Afghans or Palestinians make TV shows that speak to their people but also attempt to meet American interests. As you can imagine, it’s quite a narrow bridge that these producers need to cross.

Why would an Afghan media entity want to work with the United States?

It’s important to note that much of the actual content of the programming is not directly about things that America champions, although there is certainly some of that. It’s the overall media system that’s supposed to reflect American values. For example, in Afghanistan a lot of American-supported material comes in the form of seemingly apolitical game shows. You might argue that they promote capitalism, for example, but to a local producer they have basically nothing to do with American ideals and the U.S. is fine with that.

What American overseers want to encourage is for-profit TV, taking a secondary interest in the actual content. So they make reality TV shows that might have nothing to do with democracy or freedom but compete against factional, religious or state-run TV. The number one thing that America is interested in is getting these places to make television that acts competitively and puts profit first. You might think, “Isn’t that obvious?” Well, it’s not. Throughout much of the world, TV is run by government; it’s run by political parties. In Afghanistan, a lot of TV is funded by warlords. What the United States wants to do is show the world that there is money to be made in competitive non-partisan TV, outside of local political patronage.

And if you can do that and identify good TV with America, that translates into an entirely new message about our country.

Exactly. In the hyper-competitive media world we live in, the U.S. government knows it can’t succeed by offering TV shows that are didactic lessons in democracy or capitalism. Instead, they hope that locals watch the TV show, associate it with the freedom to choose what you want to watch, and reflect on it as being part of a broader democratic, capitalistic shift in local society. So the American ideology is meant to slip in through the back door a little, even though the U.S. is very open about whom it funds.

To attract local viewers, however, producers need considerable freedom to craft programming, and that’s where things get really interesting. Sometimes in order to make programming people want to watch, producers find themselves pushing back against U.S. positions. You’ll see a program that goes against American policy with their content but their general place is something that America likes. You’ll find critiques of America in some of this American-funded material, in part because it gives the show credibility and popularity if it resonates with the local audience.

These producers aren’t American puppets, but people who have their own political and creative agendas?

That’s right and that’s really important here. It’s a balance and I really stress that in the book. Of course the country with the guns and the money has more power. There’s no question here that America is ultimately calling the shots. But the way they’re calling the shots has to allow for a certain level of local freedom. Sometimes the U.S. puts a lot of money into an Afghan TV station and basically says, “make some reality TV shows,” and lets them do it any way they want. That’s one kind of freedom. There’s another kind in which show producers sort of play along with it and sneak something past the Americans. They actually have their own political agenda and they take U.S. money, they make the stuff the U.S. wants, and then in their last project, they make exactly what they want.

When did the United States create this “other air force”?

The idea probably started with the fall of the Soviet Union, but it really picked up in 2003, during the second stage of the Iraq war. After the WMDs never showed up, President Bush turned up the rhetoric on democracy, state-building and free media in the Middle East. That’s rhetoric that underpins the projects I write about, the idea that what we’re trying to do is not just reach a single strategic goal – we’re trying to spread ideas of democracy and capitalism and there’s some sense that allowing people to make their own media will be better at doing that. These nation-building projects, of course, have been a fiasco, but the media component has had a number of very interesting successes and failures.

Why is this kind of propaganda war happening now?

Well, if we’re talking about the contemporary moment, you really need to discuss social media, something I’m working on in my new project. I think the key thing to keep in mind is that media has grown tremendously throughout the world over the past decades, and particularly so in places like the Middle East. Not so long ago there was a single state broadcaster in many countries. Now there are countless voices. The Other Air Force considers how the U.S. attempted to adapt to a new world of the early Internet and satellite TV and that world is still relevant. But Twitter, Facebook and YouTube are now every bit as much part of the story.

U.S.-funded stations draw lots of viewers, so that might be taken as a sign of success. I think the architects of these programs are generally pretty happy with them. They might occasionally run counter to U.S.-approved messages, but they serve as very public endorsements for commercial media and America. Also, in places like the West Bank and Afghanistan, a lot of the media comes from political factions or other foreign nations. So, for many in the U.S. government, a popular, if imperfectly obedient broadcast partner that gets eyeballs isn’t so bad.

It’s very, very hard to say how media projects impact viewers and utterly impossible to separate such an impact from the political and security upheavals that have rippled through the Middle East. That said, these projects certainly do impact one important group: the creators. American partners in places like the West Bank and Kabul tend to be happy with, if still occasionally critical of, American funding partners. So there are a number of really talented, often young media makers who are grateful for American-led opportunities. This certainly does not make them willing to simply take American orders, but it seems likely to have something of a positive long-term impact from a U.S. perspective.

How is this all funded?

It all comes from U.S. tax money, mostly distributed via USAID [United States Agency for International Development]. It’s not a huge sum, particularly in the context of the incredible amount that has been spent on war and aid in the Middle East over the past decades. It’s not easy to put out an exact figure. Many millions, but not the billions we see in other areas of intervention. That said, you might consider all the aid that U.S. gives to local economies as part of the media system. For example, TOLO TV in Afghanistan succeeds because companies want to advertise. They’d be less inclined to do so if the Western world were not putting so much cash into the Afghan economy.

Are the people in the Middle East aware of the U.S. participation and if so, are they OK with it?

It’s no secret, and that’s very much intentional. As opposed to those sneak “black ops” operations during World War II or the Iranian revolution, the stations I write about advertise their affiliation with the U.S., or at least don’t try to hide it. Certainly for some viewers this brings on suspicion. But like everywhere else, people in the Middle East know that someone pays for all media, no one’s doing it as a charity case. So people certainly keep in mind the source, but there’s no perfect, unbiased funding source available for the competing stations either. They all have baggage. These U.S.-supported stations try to succeed by embracing this fact and producing attractive programming that appeals to local sensibilities in other ways.