The need for a space in American society where religious and secular opinions can co-exist, and the enduring role of religiously inspired political rhetoric, are the topics covered in two new books by Darald and Juliet Libby Professor Cathleen Kaveny, who holds appointments in both the University's Theology Department and Boston College Law School. 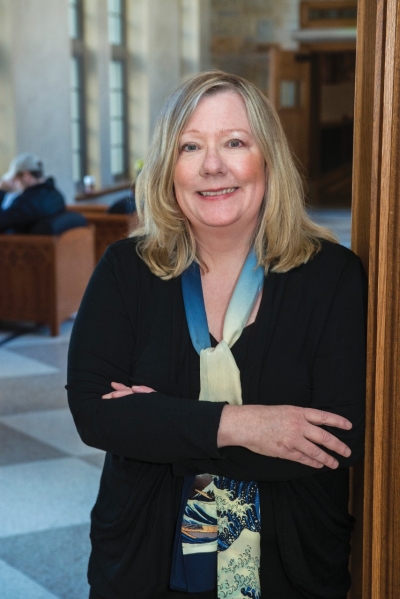 Kaveny, who joined the Boston College faculty two years ago from the University of Notre Dame, said both books – the compilation of columns titled A Culture of Engagement: Law, Religion, and Morality and the history Prophecy Without Contempt: Religious Discourse in the Public Square – derive from her fascination with the history, language and place of religiously-inspired debate and discussion in a country that pledges fealty to God yet remains committed to the separation of church and state.

A Culture of Engagement, a collection of her columns for Commonweal magazine, examines the need to recognize the viewpoints of religious tradition and secular, liberal democratic tradition can meet for substantive, critical and collaborative discussions about the issues of the day.

“Over the years as I wrote these columns, I focused on topical issues of the day and often they were infused with certain social, political or cultural tensions,” says Kaveny. “I’m interested in how in today’s society you are supposed to engage as a religious person who is an American and who takes seriously the claims on moral positions in a person’s life.”

Somewhere between the need for religious traditions to assimilate into American culture and the nation’s resistance to movements viewed as highly sectarian or “on the fringe,” there should be a middle ground where divergent perspectives can co-exist, even thrive in the presence of each other, she says.

“Most American Catholics participate not only in their religious tradition, but also in the secular, liberal, democratic rights-based tradition that currently dominates American political life,” Kaveny writes in the book’s introduction. “We cannot stand completely outside either our American identity or our Roman Catholic identity. The best we can do is to achieve some critical distance in order to evaluate the strengths and weaknesses of both identities.” 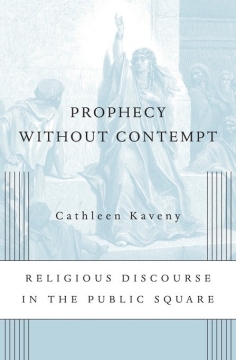 In Prophecy Without Contempt, Kaveny looks at the endurance of the jeremiad—a fiery brand of political rhetoric inspired by religious belief, from which it draws both linguistic style and moral substance.

Specifically, Kaveny set out to examine the jeremiad’s use of “prophetic indictment,” a firm denunciation on moral grounds that stands in stark contrast with the tempered language of practical deliberation and policy analysis.

It is a style of speech that asks listeners to take a stand: the right one. To employ prophetic indictment in political speech is to claim to speak from a position of unassailable authority—whether invested by God, reason, or common sense—in order to accuse opponents of violating a fundamental law.

The jeremiad has been employed throughout history—by figures as disparate as its namesake, the Biblical prophet Jeremiah, Puritan preacher John Winthrop in his “City on a Hill” sermon, and the Rev. Martin Luther King Jr. in his landmark “I Have a Dream” speech on the steps of the Lincoln Memorial in 1963.

“Prophetic indictment is a form of ‘moral chemotherapy,’” says Kaveny. “It can be strong medicine against moral cancers threatening the body politic, but administered injudiciously, it can do more harm than good.”

What particularly interested Kaveny in the role of religiously-inspired rhetoric was the expression of personal belief in the public square  literally a town square, a ship’s deck or a preacher’s pulpit at the time of the nation’s founding.

Today, the public square is an ever-expanding space powered by instantaneous global electronic communication. As a result, we may now only catch short, sharp glimpses of the public square and hear only pieces of the rhetoric, Kaveny says.

“Prophetic indictment was central to our particular understanding of ourselves as a nation. We were a Puritan nation modeled on Israel. We had a particular relationship to God, which came with particular responsibilities, but also particular blessings,” Kaveny says.

“We don’t have that narrow vision of the country any longer. Still, there is a notion of the moral responsibility of the United States, if not before God, then to a broader moral universe. Along the way, the jeremiad has evolved to have a bigger and a shifting notion of what America should be.”

A Culture of Engagement: Law, Religion, and Morality

Prophecy Without Contempt: Religious Discourse in the Public Square