Scholars from the School of Theology and Ministry have collaborated on a new book to help guide the Catholic faithful to greater awareness of the Holy Spirit’s presence and movement in their lives. The Holy Spirit: Setting the World on Fire (Paulist Press, 2017), co-edited by Professor Rev. Richard Lennan and Associate Professor Nancy Pineda-Madrid, is a collection of essays from 17 members of the STM faculty. In the book, each faculty author addresses the topic of the Holy Spirit from his or her area of study, from history, ethics, and spirituality to pastoral theology, systematic theology and the Bible.

This is the second collaborative book project from the STM. Previously, Fr. Lennan and Pineda-Madrid co-edited Hope: Promise, Possibility, and Fulfillment, to which 17 STM faculty members contributed essays. 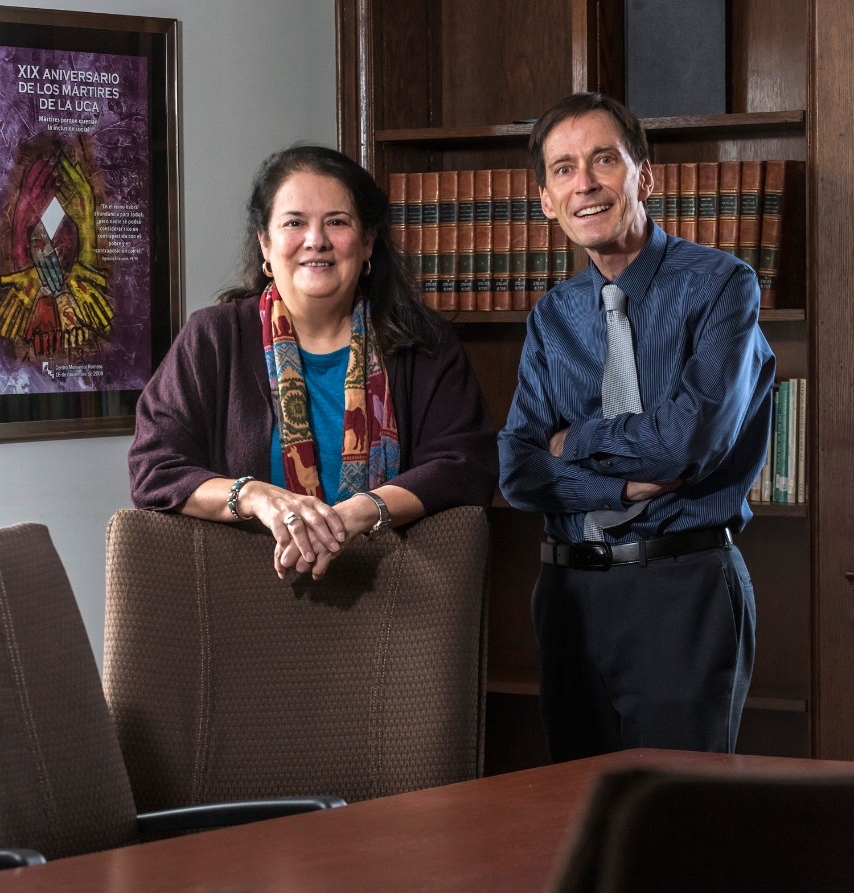 At a launch event for The Holy Spirit earlier this month, STM Dean Thomas D. Stegman, S.J. remarked, “This collection is a fine testimony to the scholarship of our wonderful professors as well as the wide diversity of specializations that their work represents. In addition, the topic of the Holy Spirit is a witness to the faith of our faculty and their commitment to theological reflection for ongoing ministry to the world.”

He also expressed his gratitude to Fr. Lennan and Pineda-Madrid for the collegiality and collaboration the two book projects have yielded. “It’s been a great blessing to our school,” he added.

“With both our books, Hope and The Holy Spirit, what we tried to do is develop aspects of Christian faith that hide in plain sight,” said Fr. Lennan.

This book is not a comprehensive theology of the Holy Spirit, according to the editors, but rather an assembly of insights into the relationship between the Holy Spirit and the community of Christ’s disciples.

“We’ve tried to articulate how the tradition has understood the Spirit, what it means to live as people of the Spirit, and how it is that the Spirit can shape and inform our life of faith,” said Fr. Lennan.

“The Spirit keeps moving,” added Pineda-Madrid. “And we have to be constantly discerning the Spirit.”

At the book launch, Pineda-Madrid and two contributing authors gave presentations on their chapters. Francine Cardman, an associate professor of historical theology and church history, cited an example of the Spirit’s presence in the witness of a group of women martyrs in France in 177. Though imprisoned and facing death, most of the women did not renounce their faith. “It’s the Spirit that enables them to confess their faith. It’s the Spirit that helps them to be strong and to endure,” said Cardman.

She cited evidence of the Spirit again when these same women went on to minister and nurture, rather than reject, the 10 or so women who had renounced their faith in the false hope of being released from prison. By the time these deniers of the faith are facing their deaths, almost all of them have found the strength to confess their faith.

As an example, Fr. Vicini cited how the Holy Spirit works like a wise mentor guiding the faithful to moral action, such as caring for and serving the poor.

Pineda-Madrid pointed out the greater attention on the role of the Holy Spirit in the church and in the life of faith since the Second Vatican Council. The book chapter she wrote with Fr. Lennan, she said, looks at the connection between the Holy Spirit and the Catholic imagination, citing specifically the writings of theologians Elizabeth Johnson, C.S.J. and Victor Codina, S.J.

“Codina believes that the church has not been sufficiently able to take advantage of the opening to the Spirit introduced by Vatican II and also at Medellín (1968 Conference of Latin American bishops). And he believes that’s true because theologians have not done enough work on the Holy Spirit,” said Pineda-Madrid.

She added: “We’re trying to certainly respond to that lacuna with our book.”