Carroll School senior Phat Nguyen adds hurricane relief to his portfolio of service to others.

It was a weekend that Phat Nguyen ’18 had expected to spend at home with his family, but when his train arrived in Worcester, Mass., he found that life had other plans for him.

Nguyen was waiting at the station when his friend, who offered to pick him up, told him he knew of a group of elders at a retirement home in Florida who were unable to respond, without assistance, to the evacuation order prompted by then-imminent Hurricane Irma. Upon hearing that his friend planned to drive to Boca Raton to help, Nguyen made the split-second decision to join him. 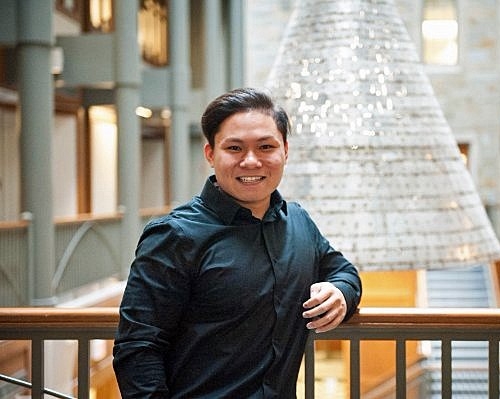 “I would be lying if I said I wasn’t worried about my job search, school and other obligations,” and looking forward to the time at home, said Nguyen. “But then I told myself, I have the opportunity to be there for others when they’re in serious need, so I should stop whining and find ways to help.”

Nguyen, a Carroll School of Management student double-majoring in finance and philosophy, said they had to act fast to make sure they arrived in time to get the stranded elders to safety in a shelter before the hurricane made landfall.  “We gave ourselves about two-to-three hours to get ready and also raise some money to head down there,” he said.

Nguyen raised nearly $3,000 for supplies that might be needed (any remaining funds were donated to disaster relief), contacted shelters to find one that could accommodate the group, and, with more than 75 gallons of water in tow, set off with his friend.

The two spent 48 hours with the elders. “The night Irma hit I remember they, my friend, and I literally were singing and dancing together,” said Nguyen. “We received multiple tornado warnings and the power was knocked out, but while all the chaos was taking place, we found our peace by sticking together.”

Nguyen applauds the power of social media and networking during times of crisis.

“Never underestimate your ability to raise money from your personal network and never doubt the kindness of your friends and family members,” said Nguyen.  “I picked up the phone for 30 minutes and raised about $1,000.”

Nguyen’s spur-of-the-moment decision to assist is consistent with his attitude toward service to others. He and his family arrived in the U.S. from Vietnam in 2005 with next to nothing, he said, knowing no English, not understanding American culture, and having no idea how they would overcome those obstacles.

Thanks to the Southeast Asian Coalition of Central Mass., he said, he and his family were able to get on their feet.  Today, Nguyen volunteers with SEACMA to spread awareness of Asian culture throughout the state, and raises funds to host annual festivals, dinners, and classes for youth, such as Vietnamese as a Second Language.

“I am grateful for all of the opportunities that allowed me to pay it forward and help build a stronger and much more loving community,” said Nguyen.  “My family would not have overcome what we had to face and I would not be here today if it wasn’t for SEACMA.”

Today, he says, the elders they assisted in Florida are doing well, so he and his friends are now raising funds to help victims of Hurricane Maria victims in Puerto Rico.  For information about assisting this effort, email Nguyen at nguyenpm@bc.edu.