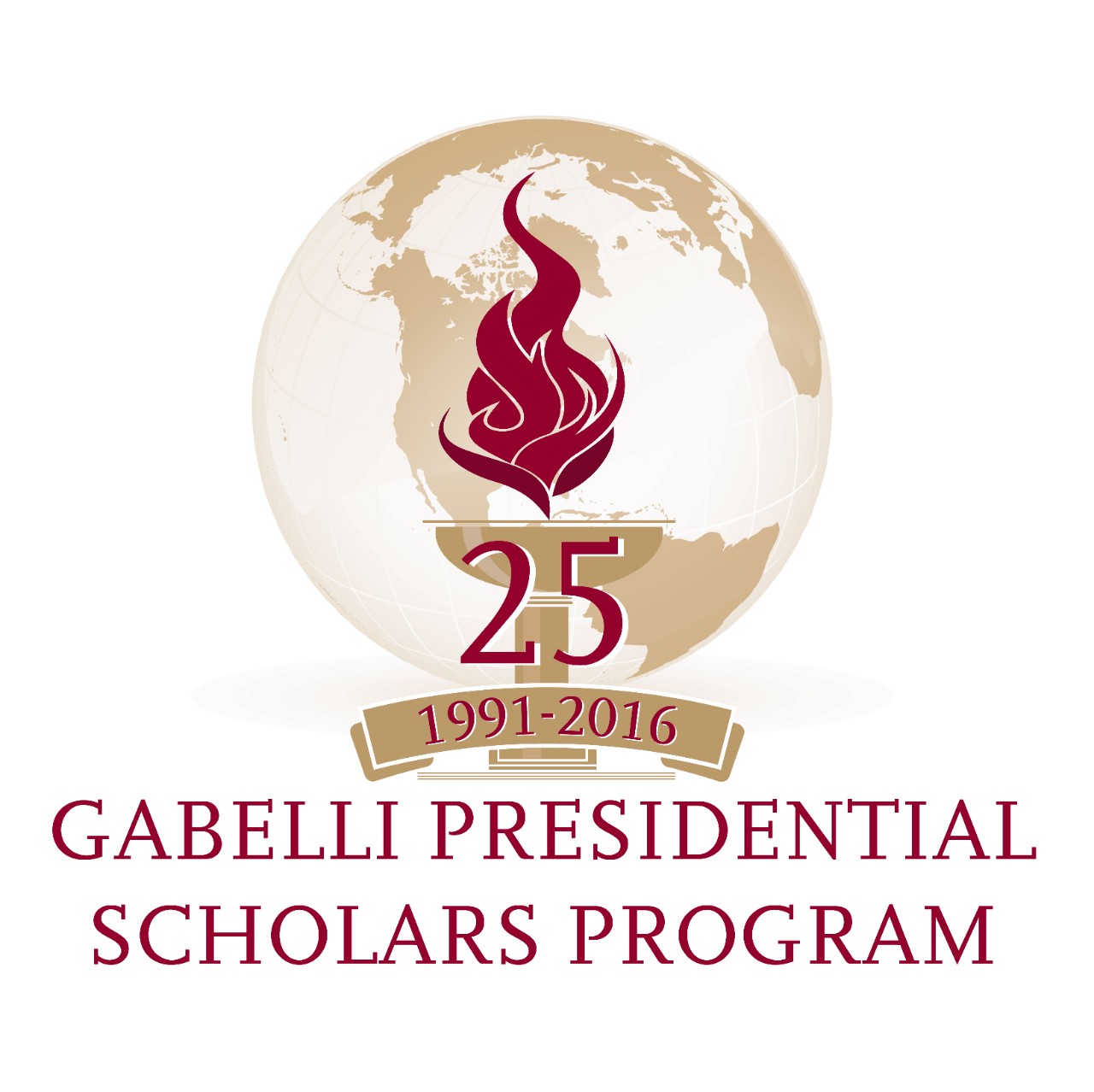 In the 25 years since the first class of Presidential Scholars started at Boston College, 300 of the country’s brightest students have participated in the University’s premier academic program that intertwines rigorous coursework in an honors program with service learning, international study and travel, and a professional internship.

Named in 2014 for one of its most committed and generous supporters, University Trustee and BC parent Mario Gabelli, the Gabelli Presidential Scholars Program (GPSP) nurtures and challenges exceptional students who have gone on to make a difference in the world after graduation.

“The program made me feel like my voice mattered,” said Chris Wilson-Byrne ’07, a director at Fidelity Investments. “This was something that I really noticed when I went on to graduate school. It seemed to me that most people were just interested in understanding the system so they could game it. I was always struck by the fact that people did not realize how their choices and behaviors actually affected the system. I firmly believe that I can impact any environment I am in – and I see it as a responsibility to always make a positive impact.” 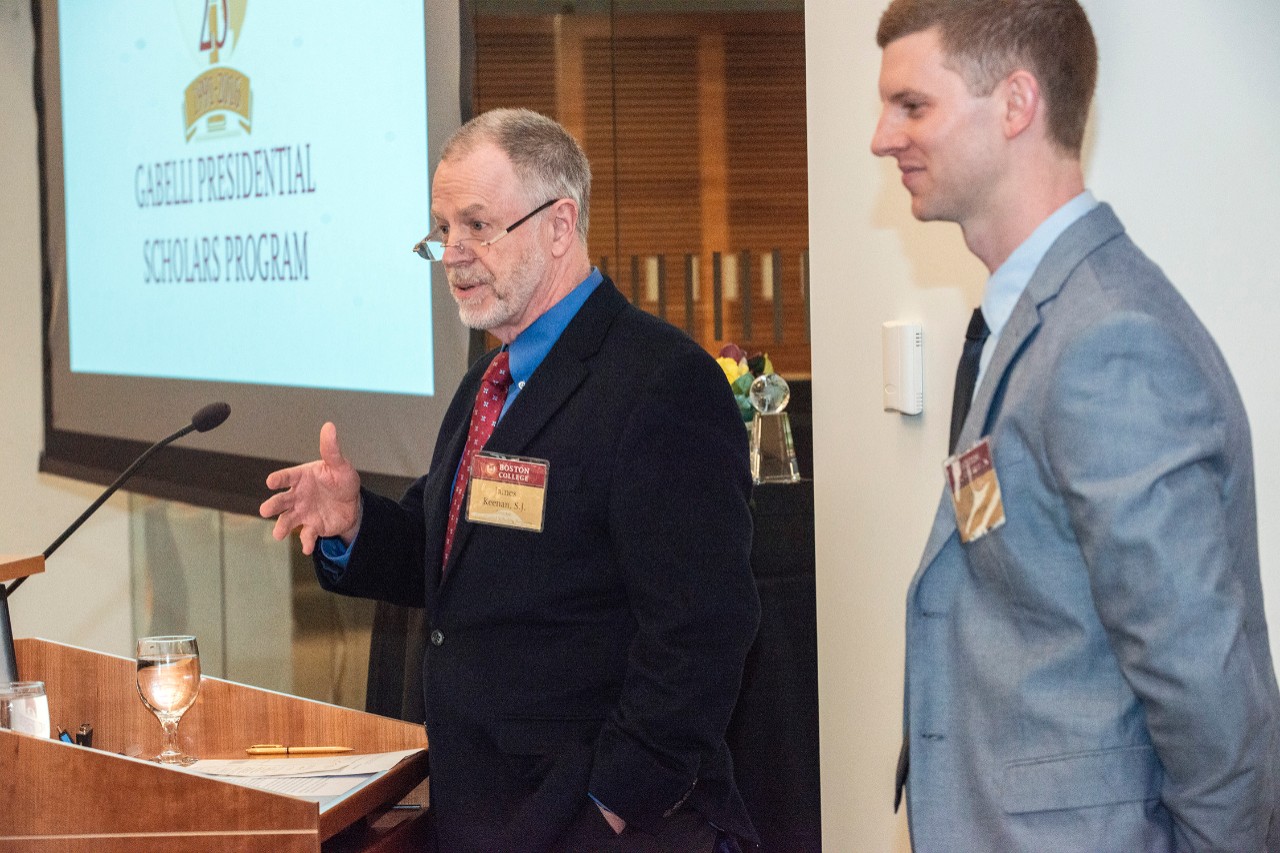 “The Presidential Scholars Program shaped me as a student in that it further instilled in me a sense of service through both the freshman summer experience at Shaw House as well as the regular program meetings,” said Ashok, a Harvard Medical School student. “What was especially helpful was discussing service in a concrete, tangible way rather than in an abstract sense.”

The University’s only academic merit scholarship program was established by BC’s Wall Street Council, a group of alumni, parents and friends based in the financial profession. Every April, the council holds a dinner that, to date, has raised more than $26 million for the scholars.

There are currently 65 Presidential Scholars at BC, spread among all four class years. Selected from among the top 2 percent of all BC’s early action admission applicants, these students have demonstrated superior academic achievement and promise, leadership potential, and a commitment to serving society.

GPSP scholars have been awarded prestigious scholarship, grants and fellowships, including Rhodes, Marshall, Churchill, Truman, and Goldwater scholarships and Fulbright grants, among others.

“I’m looking for a student to become a leader who’s going to better the world,” said Canisius Professor of Theology James F. Keenan, S.J., who has directed the program since 2010, with the assistance of Associate Director Jennie Thomas and Administrative Assistant Sarah Gregorian.

A consummate networker, Fr. Keenan has contacts and friends in locations across the globe and readily reaches out to them if it can help the program or a scholar. He also makes certain the scholars regularly meet with one another and make connections with GPSP alumni.

“Fr. Keenan is the reason this program has succeeded,” said senior Catherine Cole, a double major in political science and Islamic civilization and societies, with a minor in music. “He approaches every aspect of the GPSP with a critical eye, constantly innovating and setting bigger goals — and pushing us to do the same with our lives and careers.”

Ashok had high praise for the mentoring he got first from Sardella and then Fr. Keenan. “Fr. Keenan was a constant source of guidance and support and I would not have been able to get into medical school or win the Truman and Marshall without his help.”

“I’m looking for a student to become a leader who’s going to better the world."

The summer after freshman year, the scholars combine community service with readings in theology, philosophy, social science and public policy, and group discussions. The community service is conducted in Boston at places such as Haley House, St. Francis House, Project Bread, the Italian Home for Children and the Suffolk County House of Corrections.

“The summer of service was the first time in my life I really experienced poverty up close and in person,” said Wilson-Byrne. “It showed me how complex the issues of inequality really are and fundamentally shaped my world view on how a society should care for marginalized individuals and communities. That experience was a launching pad for me to become a much more empathetic person. And being able to go through that experience with a group of kids who were all grappling with the same sorts of questions was incredibly powerful.” 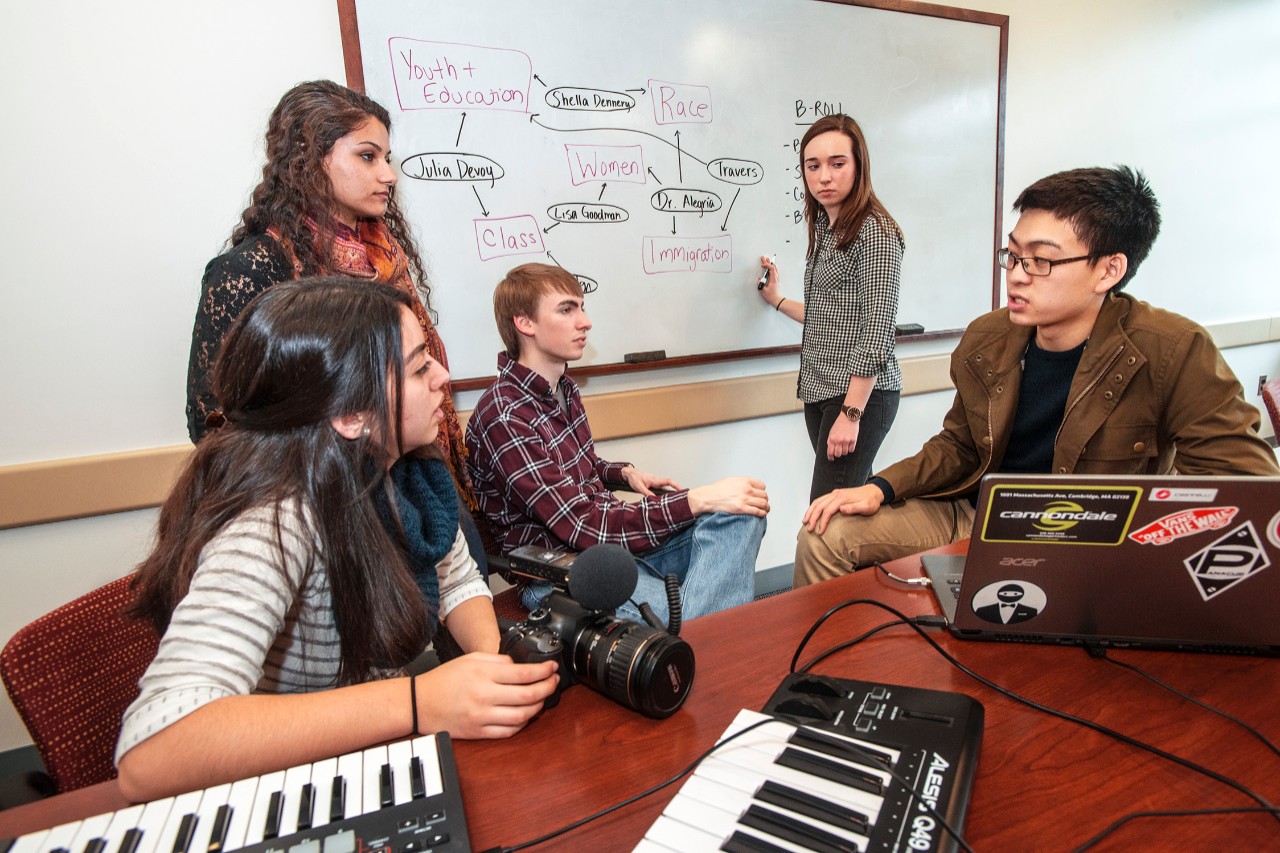 Fr. Keenan has extended the emphasis on social justice into the scholars’ sophomore year. They select a topic that will be the basis for a yearlong social justice group project, which typically involves an event that enables the scholars to spread awareness about the issue among the wider BC community. This year, the sophomores created “Overlooked and Overdosed: Stories of Recovery Road,” a photo exhibit about the opioid crisis in Boston. Their goal was to help destigmatize addiction and increase awareness about the scale of the problem. Other social justice issues addressed in the past have included immigration, mass incarceration, adult education, and mental health.

Also in their sophomore year, the scholars travel to Nicaragua over semester break to learn about that country’s social and economic challenges. They visit schools, hospitals, women’s health centers, and talk with politicians and journalists.

Fr. Keenan cites four core values that define the essence of the GPSP: global leadership; hospitality; fidelity to GPSP partners; and promotion of the common good.

“In a world of immigration and refugees, hospitality is not just being nice,” explained Fr. Keenan. “It is about being vigilant to people in need and responding to them.”

“It showed me how complex the issues of inequality really are and fundamentally shaped my world view on how a society should care for marginalized individuals and communities. That experience was a launching pad for me to become a much more empathetic person...I firmly believe that I can impact any environment I am in – and I see it as a responsibility to always make a positive impact.”

Fr. Keenan, who studied in Italy and is fluent in Italian, puts a priority on GPSP scholars gaining confidence in a foreign language and culture. As freshmen, the scholars spend spring break in Italy, where they have visited places such as Milan, Florence, Parma, Padua and Verona. For some, the trip represents their first time overseas; for others, it is their first time in a foreign-language culture.

The summer after sophomore year, the GPSP scholars embark on an eight-week language program in a country of their choosing. Scholars either study a new language or travel to a country where they know the foreign language and use it full-time in a workplace.

This May, for the first time, the junior class is going to Sarajevo. “Sarajevo, in many ways, captures the future,” said Fr. Keenan, who expects the scholars to discuss issues at the forefront in that part of the world, namely Islam, war and reconciliation, and unemployment.

“In GPSP, I met smart people with big ideas and wide-ranging worldviews, all different from my own,” said Cole. “Their insights have forced me to reevaluate my beliefs and think deeply about the person I want to be.”

“A lot of the lessons that I learned at BC helped me realize that medicine is the right profession for me,” added Ashok. “I’ll always be grateful to BC and the program for helping me grow both personally and professionally.”