Two BC freshmen are nationally recognized as role models for those with learning disabilities.

Two Boston College freshmen have been recognized by a national nonprofit as role models for persons with learning disabilities.

Auburn Stephenson of Bel Air, Md., and Connor Brady of Mendham, N.J., were both diagnosed with dyslexia in high school— considerably later than is typical—after struggling for years to keep up with school assignments. Through Learning Ally, which helps blind, visually impaired and dyslexic students succeed in education, Stephenson and Brady were able to find resources and develop strategies that enabled them to manage their schoolwork.

Stephenson and Brady were selected by Learning Ally for its 2016 National Achievement Awards: Stephenson was one of three recipients of Marion Huber Learning Through Listening Awards for Students with a Learning Disability, while Brady was among seven NAA Special Honors winners.

Dyslexia is usually detected in elementary school due to poor academic performance, but things aren’t always so straightforward. Stephenson and Brady found they had to read and study material at least twice—sometimes more—to internalize it, while most of their classmates would skim texts. In such situations, a student with dyslexia can easily feel frustration and embarrassment, and balk at speaking up in class.

“I can read, it just takes me a little bit —since word recognition takes a different path in my brain,” Stephenson explains. “Imagine a car driving around a circular track.  In a non-dyslexic brain, the time it takes to recognize a word and say it out loud could be seen as one time around the track.  In my brain, the car has to go around three times, down to Wal-Mart and back. I’m an accurate reader, just not very fast. I just don’t give up.” 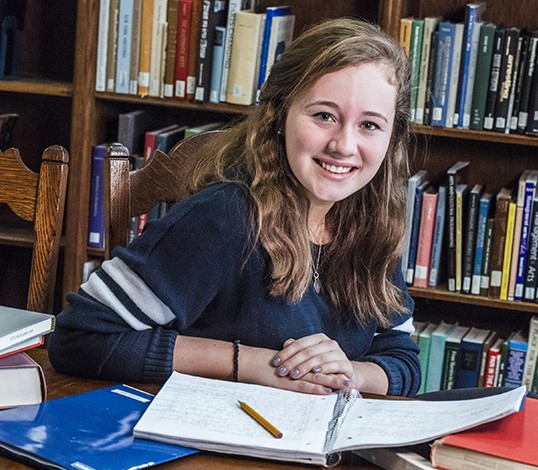 “Because I was proficient in math, I thought I just had slow reading speed,” says Brady. “When I went to specialists I was told I wasn’t working hard enough.”

Discovering that she had dyslexia “was like finding a light switch,” says Stephenson. She was able to get specialized tutoring that taught her alternative methods of reading, and make the process quicker. Through Learning Ally, she had access to an extensive collection of audio books, which proved to be a revelation.

“The first book I downloaded was Huckleberry Finn,” she recalls. “I did my reading assignment in about an hour-and-a-half, instead of the three or four hours I typically spent. It was unbelievable. I was actually able to have what everyone wants: more time. There’s something about listening to people, and relying on your ears instead of your eyes, that changes your perspective. I realized there were different ways to understand and learn new concepts.”

Brady felt mixed emotions about his diagnosis. “I was relieved that my difficulties weren’t a case of ‘not trying hard enough,’ and that I had resources to use. But then I thought about how I’d made it so far without anyone realizing what the problem was, and my feeling was: ‘How many more are there like me who struggle like this and don’t have the help they need?’”

Once Brady began using audio books and other reading and study aids through Learning Ally, he raised his history grade from C-plus to A-plus.

Having been able to realize their goal of going to an academically rigorous college, Stephenson and Brady say BC’s Connors Family Learning Center was instrumental in helping them adapt to the demands of a collegiate workload and obtain audio books and other material they need.

“They never made me feel like a label,” says Stephenson. 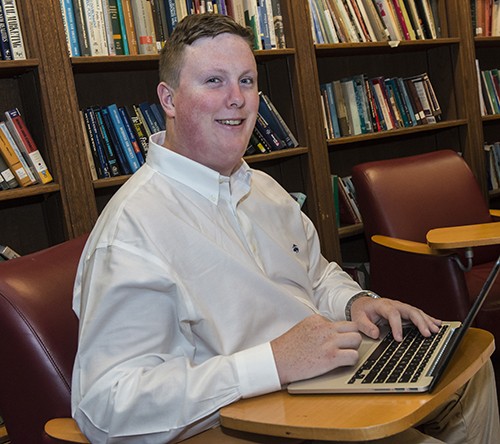 Adds Brady, “I am indebted to the Connors family for having the foresight to support something that has such a drastic impact on me and other students.”

Still, dyslexia does exact some concessions. Brady and Stephenson have to carefully plan and organize their classwork – especially if it involves reading – days in advance, and pace themselves with regular breaks so as not to overload. Spontaneity is a rare quality in their lives.

But thanks to the post-diagnosis interventions and strategies, and the support from the Connors Center, the two do have time to enjoy other aspects of being a college student. Stephenson, for example, sings with the University Chorale and traveled on the ensemble’s tour of Vienna and Budapest; she is also part of a group of BC students with learning disabilities who mentor children at the Thomas Edison School in Brighton dealing with similar difficulties.

“What I try to convey—whether it’s to teachers, students or parents – is that there are people, like me, who don’t fit into neat little categories of learning,” she says. “You have to look deeper into that person to see what’s really going on.”