A funeral Mass for Rev. Raymond G. Helmick, S.J., 84, an eminently respected theologian who was internationally regarded for his conflict resolution skills, will be held on Tuesday, April 26, at 10 a.m. at the Campion Center in Weston, Mass.

Whether teaching theology, mediating conflict in world trouble-zones or crafting a harpsichord from fine wood, Father Helmick—who marked his Jubilee in the Society of Jesus in 2001—considered himself a problem-solver.

He served as an unofficial emissary between Catholic and Protestant paramilitary groups in Ulster, and played a similar role as a founder of the U.S. Interreligious Committee for Peace in the Middle East. 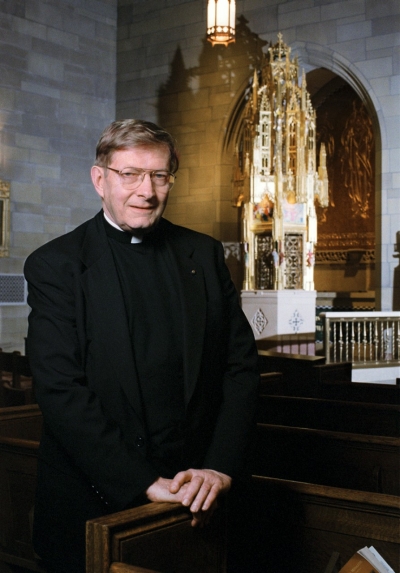 In recognition of his conflict resolution efforts, Father Helmick was invited to the White House for the 1993 signing of the peace accord between Israel and the Palestine Liberation Organization, and traveled with Rev. Jesse Jackson and other religious leaders during the 1999 Kosovo crisis to negotiate the release of three U.S. soldiers captured by the Serbs.

At right: Rev. Raymond Helmick, S.J., in 2001, photographed for his 50th anniversary as a Jesuit. Behind him is the tabernacle he built for St. Theresa's Church in West Roxbury. (Lee Pellegrini)

"Raymond Helmick was a wonderful colleague who modeled what respect and compassion mean in every domain of life,” said Professor of Theology Stephen Pope. “He was always a collegial colleague, a caring professor and a quietly passionate activist devoted to the cause of justice and peace. His discussions of his involvement in peacemaking in Northern Ireland and the Middle East enthralled his students and inspired them to want to do more with their lives. The Theology Department will miss him greatly, as will the wider University."

Added former colleague and fellow Jesuit Joseph Appleyard, S.J., "Fr. Helmick was a man for the troubled times we live in. He instinctively saw across religious and political borders and spent his life resolving the conflicts created by those borders and teaching others how to do this."

An accomplished woodworker, the Arlington-born Fr. Helmick kept a woodshop at St. Theresa's Church in West Roxbury, where he lived in residence with his brother, Rev. Msgr. William M. Helmick, St. Theresa’s pastor.

“Woodworking is all problem-solving,” he said in a 2001 BC Chronicle interview. “Every intricate detail is a problem to be solved."

Fr. Helmick graduated from Boston College High School in 1949, and on his 18th birthday, entered the Shadowbrook novitiate, in Lenox, Mass. As it turned out, he would enter twice: The first time he developed an ulcer during his primi year and had to return home; determined to re-apply, he again entered Shadowbrook in 1951.

After philosophy studies at Weston (1954-1957), he spent his regency teaching history and religion at St. George’s College in Kingston, Jamaica (1957-1960). He studied theology at Sankt Georgen in Frankfurt, Germany, and was ordained a priest in the Frankfurt Cathedral in 1963.  He returned to the U.S. the following year for tertianship in Pomfret, Connecticut, and then returned to St. George’s, where his future work with social and political structures and conflict-resolution initiatives began to take shape.

Father Helmick left in 1967 to pursue graduate studies in ecumenical theology at Union Theological Seminary and Columbia University, and in 1973 moved to London to establish an ecumenical center focused on conflict resolution (he preferred the Mennonite term “conflict transformation”), a joint ministry of the Irish and British Jesuit provinces. There, the search for solutions to seemingly intractable problems became the center of his work over next four decades—in Ireland, Lebanon, Kurdish Iraq, Israel, Palestine and the Balkans.

Based from 1982 to 1985 at NGOs in Washington, D.C., Father Helmick then came to Boston College, where for the next 17 years he continued his conflict-resolution work while teaching in the University’s Theology Department and at St. John’s Seminary. He served from 2002-2004 as senior associate at the Center for Strategic & International Studies in Washington.

Father Helmick had a lifelong interest in, and talent for, music, as well as architecture and other art forms. Offered a piano scholarship to the New England Conservatory, he instead chose the Jesuit novitiate. Had he not entered the Society of Jesus, he has said he would have been either a musician or an architect.

During his graduate study years, Fr. Helmick relaxed by building a harpsichord, and when St. Theresa’s was being renovated, he built a free-standing tabernacle modeled on 15th-century examples at Louvain. He also worked on a wall mosaic of Christ healing and a large mosaic of St. Theresa, which was unfinished when he died.

In addition to Msgr. Helmick, he is survived by his sister, Marie Barry.

A wake for Father Helmick will be held on Monday, April 25, from 3 to 5 p.m. at the Campion Center, with a prayer service at 4:30 p.m. Following the funeral Mass the next morning, burial will be in the Jesuit Cemetery at Campion Center.  The Center is located at 319 Concord Road in Weston, Mass.