Margaret J. 'Peg' Kenney, whose career in mathematics education at BC spanned nearly six decades, has died at age 81.

Margaret J. “Peg” Kenney, a leader in mathematics education whose career at Boston College spanned nearly six decades – and whose high school teacher once told her that “girls don’t do math” – died on July 5 at the age of 81. 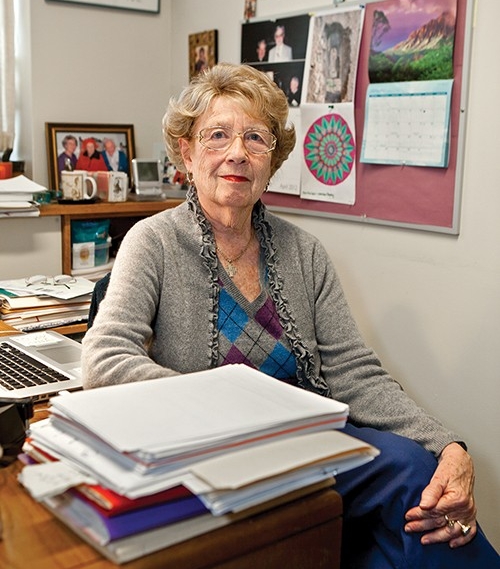 Dr. Kenney’s arrival at BC in the 1950s came during a watershed period for the University – she was among the first wave of female undergraduates to study at the Heights – and for the profession that she would enter. Concerns about the quality of American schoolchildren’s mathematics and science education, prompted in part by the Soviet Union’s launch of its Sputnik satellite in 1957, spurred national initiatives to strengthen math and science teaching.

Boston College would figure prominently in the efforts to reshape mathematics education, and Dr. Kenney – starting out at a time when women constituted only six percent of math Ph.D.s – would play an important role in preparing generations of future teachers at BC and elsewhere.

A Boston native and daughter of a 1930 BC alumnus, Dr. Kenney entered BC in 1953 as a member of the School of Education’s second class, but – heeding her teacher’s words of caution – initially decided on French as her major before “coming to my senses” and switching to mathematics, she recalled years later. Needing to catch up on math requirements, she took a summer course taught by Stanley Bezuszka, S.J., a mathematics education pioneer and director of BC’s Mathematics Institute – established to help improve content and instructional practice in mathematics at the pre-college level – who became Dr. Kenney’s mentor.

After earning a master’s degree in 1959 to go along with her undergraduate degree, Dr. Kenney (who later earned a doctorate from Boston University) joined the School of Education faculty and the Mathematics Institute, as Fr. Bezuszka’s assistant director. In addition to teaching undergraduates, Dr. Kenney was heavily involved in the institute’s projects, providing assistance, instruction or coordination in 49 National Science Foundation-funded programs.

Dr. Kenney – who would later succeed Fr. Bezuszka as Mathematics Institute director – also became a major contributor to her field through her involvement in the Association of Teachers of Mathematics in Massachusetts – for which she served as president – and the National Council of Teachers of Mathematics, where she was on its board of directors. Dr. Kenney directed an NSF-funded NCTM project to train teachers in the instruction of discrete mathematics, which emphasizes data-gathering and problem-solving skills; the project reached thousands of grade 7-12 teachers and students.

Reflecting on her career in a 2013 Chronicle interview shortly before she retired, Dr. Kenney said, “In effect, my world has been defined by BC – personally and professionally. Many of the friends I have had from my undergraduate days remain close friends now. Spiritually, Boston College has been a trusted source for deepening my faith. Professionally, the Mathematics Institute pursuits afforded me the opportunity to work with teachers and students of all levels in this country and abroad for many years. A large number of these pre-service and veteran teachers became cherished lifelong friends.  I am forever grateful to BC for all this.”

In retirement, Dr. Kenney remained active professionally, working on a history of the Mathematics Institute for the University Archives and a new edition of a resource book for mathematics educators she had co-authored with Fr. Bezuszka.

Among many other honors Dr. Kenney received during her career, one was especially fitting: the inaugural Rev. Stanley J. Bezuszka, S.J., Achievement Award for Excellence in the Teaching and Learning of Mathematics from the ATMM.

“For decades, Peg mentored, monitored and directed mathematics education locally, regionally and nationally,” said Joseph Caruso, an ATMM board member, on the news of Dr. Kenney’s death. “Countless educators were nourished by her wisdom, understanding, expertise and leadership. How lucky we have been for well over five decades to have had Peg’s inspirational leadership, dedication and devotion to mathematics education.”

Even as Dr. Kenney tackled mathematics education issues on a national scale, her BC colleagues said, she showed equal care and concern for the BC community and her department in particular.

“I can remember Peg arguing, with quiet force, that we always needed to remember the students,” said Professor of Mathematics William Keane. “She pushed for smaller class sizes, for more options in our electives, and for innovation in teaching methods. Even as the department grew from a small group with primarily a service mission to an internationally recognized research center, we have maintained our dedication to the undergraduate program, due in no small part to Peg’s efforts.

“She was always willing to listen, and to offer concrete and unerringly helpful suggestions. There remains a tradition among math faculty of taking teaching seriously, of discussing ideas and techniques; it’s a spirit Peg helped instill.”

“She touched me personally as she touched everyone concerned with the math education of young people,” said McIntyre Professor of Mathematics Solomon Friedberg, the department chair. “Peg had great wisdom, a tremendous appetite for working to improve math education, and a big heart.”

In lieu of flowers, expressions of sympathy may be made in her memory to My Brother's Keeper, Box 358, Easton, MA 02356.