A celebration of the life of Horace Seldon, a former faculty member in the Philosophy Department, will take place October 21.

A formal celebration of  the life of Horace Seldon, a former part-time faculty member in the Philosophy Department whose course on racism in American history was a perennial favorite among Boston College undergraduates, wil take place on Saturday, October 21, at 3:00pm, at the Cathedral Church of St. Paul in Boston. Mr. Seldon died at his home in Wakefield, Mass., on Aug. 17. He was 93.

A native of Haverhill, Mr. Seldon was the founder and longtime executive director of Community Change Inc., a non-profit group that seeks to address racial issues through a variety of community activities, and which became one of the community service field placements for BC’s PULSE Program. 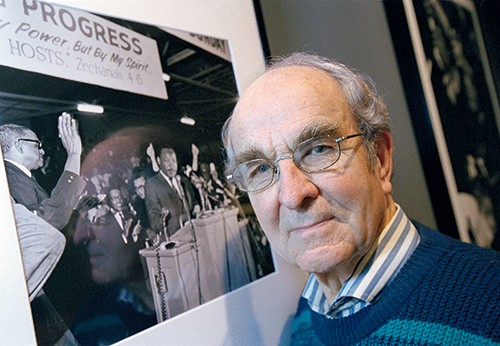 In 1980, Mr. Seldon expanded his BC association when he began teaching History and Development of Racism in the USA through the Philosophy Department, through which he helped undergraduates explore the formation of American racial attitudes, as well as methods used to combat racism throughout U.S. history.

“As a society, we need to try and understand this complexity,” he said in a 2003 interview with Chronicle. “And that is even more important for young people who have never witnessed or experienced racism, or who doubt its very existence.”

Carroll School of Management Associate Dean Richard Keeley – who as director of PULSE at the time invited Mr. Seldon to teach at BC – remarked to Chronicle on the course’s popularity: “Students constantly talk about how valuable the course has been as a forum for discussing race in America. Horace lays out the background and invites people into the discussion without making them feel as if they’ve been put on the spot.”

Mr. Seldon said the assassination of Martin Luther King Jr. had spurred him to fight racism, and led him to form CCI. Under his direction, the organization provided civil rights leadership development and internship programs, sponsored forums, conferences and other events – including performances of “The Man Nobody Saw,” a play about institutionalized racism – and honored Greater Boston residents’ anti-racism efforts with a series of award ceremonies. In 1998, President Clinton recognized CCI as among 300 “promising practices” for improving race relations in the US.

Speaking with Chronicle, Mr. Seldon said that despite the gains he’d witnessed, total victory against racism was unlikely – which for him made the struggle all the more important.

“The permanence of racism doesn’t mean you give up, any more than you give up if you’re an alcoholic trying to quit drinking. To simply despair is no longer possible, so even as you live with racism, you shake your fist at it and fight it.”

Mr. Seldon added that talking with his students was therapeutic. “The quality of students in my class has, over the years, gotten better and better. I find myself stimulated and energized by their questions and comments, their struggles with the issues and their willingness to be open.”

The University chose Mr. Seldon as the namesake for one of its Advanced Study Grants, which support research and other projects by undergraduates who display scholarly initiative and imagination. Among the projects funded by the Horace Seldon grant have been research on anti-Semitism on college campuses, a study on criminal defense investigation for indigent clients, and development of a self-sustaining educational program for at-risk young mothers.

Mr. Seldon, a graduate of Amherst College and the Andover Newton Theological School, was an ordained minister in the United Church of Christ.

A celebration of Mr. Seldon’s life will take place on Oct. 21, the date of the 1835 Women’s March of Courage, when members of the Boston Female Anti-Slavery Society marched through a mob that had nearly lynched abolitionist William Lloyd Garrison. For information on the event, click here.