From his earliest years as a student in the Evening College in 1951 through his unprecedented 56-year career as an administrator and University citizen, the late James P. McIntyre’s lifelong journey played a unique role in shaping Boston College.

Now, a year after his death, that journey has been brought to life through a poignant memoir that captures in his own words the evolution of a university he was destined to serve. 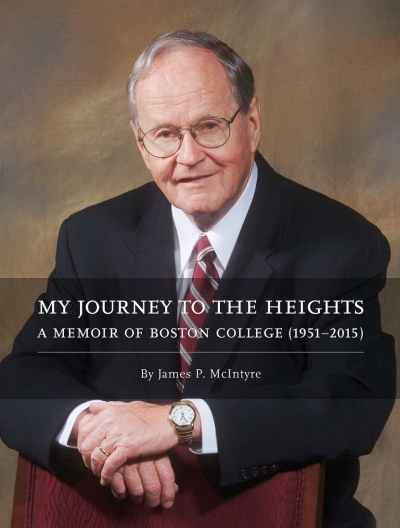 My Journey to the Heights: A Memoir of Boston College (1951-2015), chronicles the senior vice president’s personal voyage from evening classes at BC Intown on Boston’s Newbury Street to his role as one of the University’s most beloved and respected administrators, providing in the process an invaluable historical account of Boston College and its rise from a commuter school for local Catholics to one of the nation’s preeminent national universities.

Produced for Boston College by Executive Director of Marketing Communications and Boston College Magazine Editor Ben Birnbaum and edited by Senior Writer William Bole, the memoir was undertaken at the request of University President William P. Leahy, S.J., who wanted to capture McIntyre’s six-and-a-half-decade institutional perspective to help BC “to better know its history.”

“Jim McIntyre invested so much of himself in Boston College, and through that investment he played a unique role in helping to shape the University. He was a person of faith, which animated so much of his life, and a person who was steadfast in his love of and dedication to his family and Boston College."— University President William P. Leahy, S.J.

At a book launch ceremony on Sept. 18 attended by McIntyre’s family, fellow administrators, alumni, and friends, Birnbaum said McIntyre was the spirt of Boston College for more than 50 years, a person who selflessly embraced any challenge to meet BC’s most pressing needs.

“As I think of Jim, and of the BC times in which he lived, and as I read this book, I’ve come to imagine that he was more than an actor in those times; but that he embodied those times,” said Birnbaum. “He was, in his origins and in his development—and during those years in which he worked for BC—not just an agent of change, but an embodiment of the Boston College that evolved over those years, the BC that went from being somewhat uncertain about its place in this country and in the world, to the university that is presently sure of itself, of its strength and its responsibilities and its continued thriving.”

During a professional career that began in the fall of 1959 when he was hired as the first layperson to work in the Office of Undergraduate Admission, McIntyre had a hand in every significant administrative role within Boston College—from Admissions and Student Affairs to founding BC’s Advancement effort—earning him the moniker “Mr. BC” and the affection of a Boston College community forever grateful for his service.

The memoir features McIntyre’s recollections of the challenges and triumphs inherent in his many roles, and of the University’s attempt to reconcile its commitment to its past while building for a more prosperous and prestigious future.

At the book launch, Fr. Leahy, who worked closely with McIntyre for 19 years, praised him for his unwavering commitment to his family, his faith, and to Boston College, which were the focal points of his life.

“Jim McIntyre invested so much of himself in Boston College, and through that investment he played a unique role in helping to shape the University," said Fr. Leahy.  “He was a person of faith, which animated so much of his life, and a person who was steadfast in his love of and dedication to his family and Boston College.”

Fr. Leahy also praised Monica McIntyre, Jim’s wife of 53 years, the mother of their six children and grandmother of 16, for her support that made McIntyre’s lifelong contribution possible.

“This book is Jim’s memoir,” said Fr. Leahy, “but it is also Monica’s, as faith, family, and BC were interwoven in their lives.”

McIntyre’s daughter, Karalyn McIntyre Hardiman, LSOE ‘94, SSW ‘95, said that her father’s story was truly a BC story. From meeting his future wife on his first day of work at BC, to recruiting in admissions, negotiating with student leaders in Student Affairs, and cultivating relationships in Alumni Affairs, he loved serving Boston College.

“As I think of Jim, and of the BC times in which he lived, and as I read this book, I’ve come to imagine that he was more than an actor in those times; but that he embodied those times.” —Ben Birnbaum

In the modern history of Boston College, there were few major issues in which McIntyre was not personally involved. He had a hand in establishing BC's financial aid program, creating its centralized student affairs office as BC’s first lay vice president, directing its first capital campaign as its newly appointed vice president for University Affairs, and hosting international finance conferences and other events as senior vice president.

The book touches on many of these milestone events under four Boston College presidents, as well as on his own life’s journey, from his humble origins in Malden as the son of Irish immigrants, to his father’s deathbed exhortation to him, at the age of six, to “take care of his mother,” to the jobs he took to support his family while a student at Malden Catholic High School and BC's Evening College, and his enduring love for his wife, Monica, and his six children, all of whom attended Boston College.

In the straightforward, unassuming voice for which McIntyre was known, the book provides an inside perspective of his efforts under former BC President Michael Walsh, S.J., to build an admissions office capable of national recruitment and a Student Affairs office that could attend to the difficult tasks of transforming a commuter school into a residential university—while working with student leaders to address the turbulent social issues of the late 1960s; his attempts in the early 70s to help deal with its financial struggles under the leadership of Seavey Joyce, S.J.; BC’s remarkable transformation from a regional to a national university under J. Donald Monan, S.J.; and its steady, focused rise to national eminence under Fr. Leahy. Throughout the memoir, McIntyre’s relentless commitment to fundraising for the betterment of Boston College is underscored—from the first capital campaign that raised $25 million in 1977, to the recently completed $1.6 billion Light the World campaign that played such a pivotal role in the transformation of Boston College—as is his unwavering love for the institution that was his life’s mission.

“I thought it would be deeply satisfying to work for an organization whose goals were very congruent with my own—to help young people live good lives, inspired by their faith,” he states in the memoir.

“In the twilight of my career, I can report that I am a happy man, and some would say a lucky one too...We have been successful in raising the ceiling of a great institution. It is now up to our successors to use that ceiling as their floor as they reach for even greater heights. That is the rest of my story."

Birnbaum said that the memoir project was an unforgettable experience, despite his regret that McIntyre’s death from multiple myeloma last fall precluded his ever holding a copy of the book in his hand.

"Too much Boston College history has been lost, unfortunately, because the history makers didn't think that writing about what they had done and seen was their job. To catch Jim’s memories, at the end of his long career, was a gift. And when you think about the distance Boston College traveled between the day Jim first stepped on the campus and the day he died—nothing less than remarkable. People will certainly live longer in the future, but it's unlikely we’re ever going to see, over the course of a human lifetime, the kind of evolution that Boston College went through between the 1950s and today. And Jim witnessed it all, and played a part in it."

“In the twilight of my career, I can report that I am a happy man, and some would say a lucky one too. . .We have been successful in raising the ceiling of a great institution. It is now up to our successors to use that ceiling as their floor as they reach for even greater heights. That is the rest of my story."— James P. McIntyre '57, M.Ed.'61, D.Ed.'67, H'11

My Journey to the Heights is available at the Boston College Bookstore.