In January 2014, the NBA superstar attended a marketing class and finance seminar at the Carroll School of Management.

Boston College Marketing Professor Nick Nugent was teaching the first class of the semester in his popular International Marketing course on Thursday evening, January 16, when an unexpected guest walked into his classroom.

“I had just begun the class with an example of the how the NBA is a model of successful international marketing and how Kobe Bryant is its biggest star, when suddenly the door opened and in walked Kobe,” said Nugent. “It was surreal.” 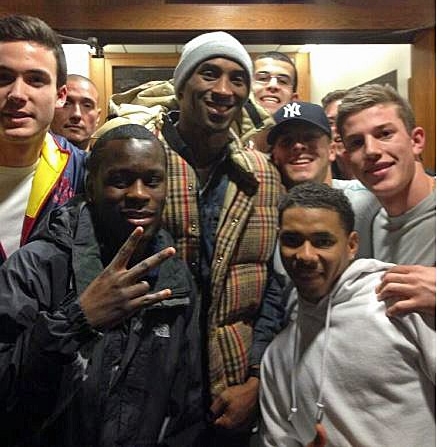 Kobe Bryant with BC students in 2014. (Danny Zaid)

The NBA All-Star and MVP sat down among the students and took notes, followed the PowerPoint presentation and even asked a question, to the delight of Nugent’s 40 undergraduate students.

At the class break, Bryant approached Nugent to say he was enjoying the class when a student asked if the two knew each other. “I know of him,” Bryant declared, a line that Nugent said was obviously not true but will “elevate his teaching reputation to stardom.”

Bryant remained in the class for two hours until its conclusion, and then signed autographs and took photos with all the students in the class, including three students from Japan who told Bryant how popular he is in their home country.

“I did not go to college,” Kobe told the BC students, “but I love to learn and international marketing is something I am interested in.”  The next morning Bryant tweeted out a message “Learn, Learn, Learn. Thank you #BC #internationalmarketing, Education never stops.”

Nugent, who has taught at BC for 27 years and also teaches marketing classes at Southern New Hampshire and Harvard universities, said it was a night that he and his students will never forget. “The only difficulty will be next week when I try to top our first class!” he said.

Bryant returned to campus on Friday, January 17, to attend a finance seminar, part of the Carroll School of Management's "Research Conversations" series for faculty. The topic at hand was a quantitative analysis of bank capital requirements, and he took a moment to talk about his interest in the courses in this video: