Vincent Rougeau, whose decade-long tenure as dean helped to enhance the reputation and stature of Boston College Law School, has been named president of the College of the Holy Cross, effective July 1.

As dean of BC Law, Rougeau led a reorganization in leadership structure that supported a more holistic approach to student services, expanded the school’s recruitment of a diverse student body, and enhanced the school’s commitment to experiential learning and global engagement.

Through his efforts, BC Law’s Center for Experiential Learning brought together the school’s hands-on training programs, while the Global Practice Program launched new opportunities for BC Law students in Dublin, Germany, Chile, France, and other locations around the globe. 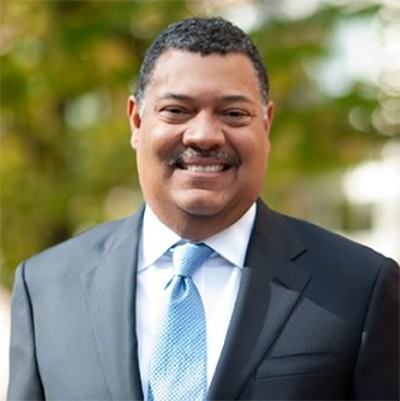 “It has been an honor for me to be the dean of BC Law for the past ten years,” said Rougeau.  “This is one of the nation’s outstanding law schools, and that is obvious based on many objective measures⁠—the impressive faculty, the outstanding students, the extraordinary staff, and the accomplished alumni.  But what has always been distinctive about BC Law is the community.  Over years and generations, BC Law has built a community of people who care deeply for one another and who are committed to the highest standards of professionalism and academic excellence. I have been so very proud to be a part of this community and to serve as its leader.

“Although I am taking on a new role at a new institution, I am not going very far away and I will be leading a college that shares the same Jesuit heritgage that guides and animates us at BC Law: formative education of the whole person, a commitment to ethical and personal discernment, and passion for service to others, particularly those least fortunate.”

A nationally respected expert in legal education and Catholic social thought, Rougeau is the author of the book Christians in the American Empire: Faith and Citizenship in the New World Order. His research and writing has focused on the relationship between religious identity and citizenship in highly mobile and increasingly multicultural democratic societies. He is the current president of the American Association of Law Schools, and serves as the inaugural director of the Boston College Forum on Racial Justice in America. He also serves as senior fellow at the Centre for Theology and Community in London.

"Since he arrived at Boston College a decade ago, Vince Rougeau's leadership at the Law School and across campus has been extraordinary,” said Provost and Dean of Faculties David Quigley.  “He has hired a strong cohort of faculty colleagues and encouraged far greater engagement with the University's other schools and centers, all while advancing a powerful vision for the contemporary importance of our mission.  Vince is recognized as a national leader in legal education and will surely be a great college president.  I wish him every success at the College of the Holy Cross."

“Vince Rougeau has been a well-liked and respected leader of BC Law as well as a much-appreciated member of the Boston College community for the past decade,” said University President William P. Leahy, S.J. “I wish him the very best in his new role as president of the College of the Holy Cross.”

“BC Law will always remain a special place for me,” said Rougeau. “Because of the strength and dedication of the members of the BC Law community, we have been able to do transformative work together over the past decade.  BC Law has emerged stronger than ever from a major crisis in legal education that followed the 2008 recession.  We have made innovative  curricular changes, consistently hired outstanding faculty, achieved successes in admissions and career placement that have drawn national attention, and we have reengaged our alumni and friends, who have responded with record-breaking  financial generosity and extraordinary service to the school.

“We also have done transformative work together to make BC Law a more diverse, equitable, and inclusive community.  This was not without its challenges, but we approached it with the humility and honesty required to ensure that all are embraced and welcomed at BC Law.  Although our work is not yet complete, I take great pride in the example of institutional engagement with issues of diversity, equity, and inclusion that we have set for the legal academy and the legal profession.”