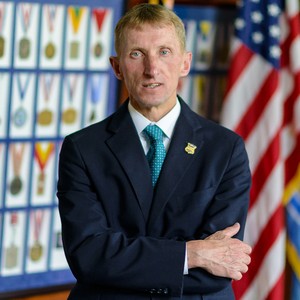 Financial Vice President and Treasurer John Burke praised Evans as an experienced professional of uncompromising integrity with a proven track record in the areas of public safety and security.

“Bill Evans’ extensive experience and his understanding of BC’s commitment to student formation make him an ideal choice to lead our department,” said Burke.  “He will be a welcome addition to the BC community.”

Evans, the father of a BC graduate, said he is looking forward to assuming his new role at Boston College.

“Coming to Boston College to serve as its executive director of public safety and chief of police is a wonderful opportunity for me and my family,” said Evans. “I have always admired the Jesuit mission of service to others, and I am honored to be able to serve one of the nation’s best universities, one that I know so well from my experience as a parent. I have loved being a Boston Police officer and working with the men and women of the BPD. It has been a great honor to lead this department as its police commissioner. I cannot say enough about the hard work and dedication of our officers. I am confident that they will continue that fine tradition.”

A lifetime Boston Police officer who began his career as a patrol officer in 1982, he rose steadily through the ranks to become the city’s police commissioner.  Evans served for nine years as captain of District D-14 in Allston/Brighton from 1997 to 2006, where he worked closely with chiefs of police and student affairs leaders at area colleges.  He then served as captain of District D-4 (South End/Back Bay) from 2006-2009, and superintendent in 2009, where he oversaw all police districts and special events in the city as the chief of the Bureau of Field Services. He was named interim police commissioner by former Mayor Thomas M. Menino in 2013, and was appointed police commissioner by Mayor Martin J. Walsh in 2014.

While captain of District 14 in Allston/Brighton, Evans initiated the BPD’s participation in student orientations across the city, and semi-annual meetings between Boston Police and Boston-area collegiate police chiefs/directors of security. He also played key roles in initiating the BPD Ride-Along Program for college administrators.

While superintendent, he led the strategic response team that was instrumental in capturing the Boston Marathon bombing suspect, and was responsible for security of all major events in Boston, including parades, marches, demonstrations, and championship celebrations.

During his tenure as police commissioner, Evans has been credited with diversifying the Boston Police force, enhancing police training for the city’s officers, and building effective relationships with residents, students, and business owners through open dialogue and transparency.

A graduate of Suffolk University, Evans holds a master’s degree in criminal justice from Anna Maria College. He is also a graduate of the FBI’s National Academy, and received several certificates from the Kennedy School of Government at Harvard University in subjects ranging from homeland security to preparedness leadership. He is active in several professional organizations, including the International Association of Chiefs of Police and the Major Cities Chiefs Association, and has served as an adjunct professor at Boston University and guest lecturer at Boston College and Northeastern University.

A lifelong resident of South Boston and the youngest of six brothers, Evans and his wife, Terry, are the parents of three children: Carolyn, John, and William.  An avid runner, Evans has completed 53 marathons, including the Boston Marathon 20 times.

“Throughout my career I have been guided by the principle that building good relationships and partnerships is the key to good policing,” said Evans. “I look forward to working with BC administrators, BC Police, faculty, and students—as well as community members—to build relationships that will help provide a safe environment for all.”