A chance in the world

This month, Steve Pemberton ’89 brought the film version of his highly acclaimed memoir to a private showing at his alma mater, a place he continues to hold in his heart.

Some 500 members and guests of the University community gathered in Robsham Theater on May 1 for a screening of “A Chance in the World,” co-sponsored by University Communications, Student Affairs, and the Alumni Association. The as-yet unreleased film is an adaptation of Pemberton’s book of the same title, which recounts the perseverance and faith that helped him survive an abusive foster family, led him to BC and, ultimately, brought him marriage, family, and a successful career as a senior executive at Walgreens and a national leader in diversity and inclusion.

The evening included remarks by Pemberton, who also participated in a panel discussion with John Sykes, his former guardian and high school mentor, and Tiziana Dearing, a professor at BC School of Social Work and co-director of its Center for Social Innovation.

Moderated by Associate Vice President for University Communications Jack Dunn, the sometimes emotional conversation provided an opportunity for Pemberton to offer insights into the making of the film, revisit several chapters of his story and – along with Sykes and Dearing – discuss broad themes of redemption, forgiveness, and foster care-related issues.

[Watch reports on the event: CBS Boston and NBC Boston] 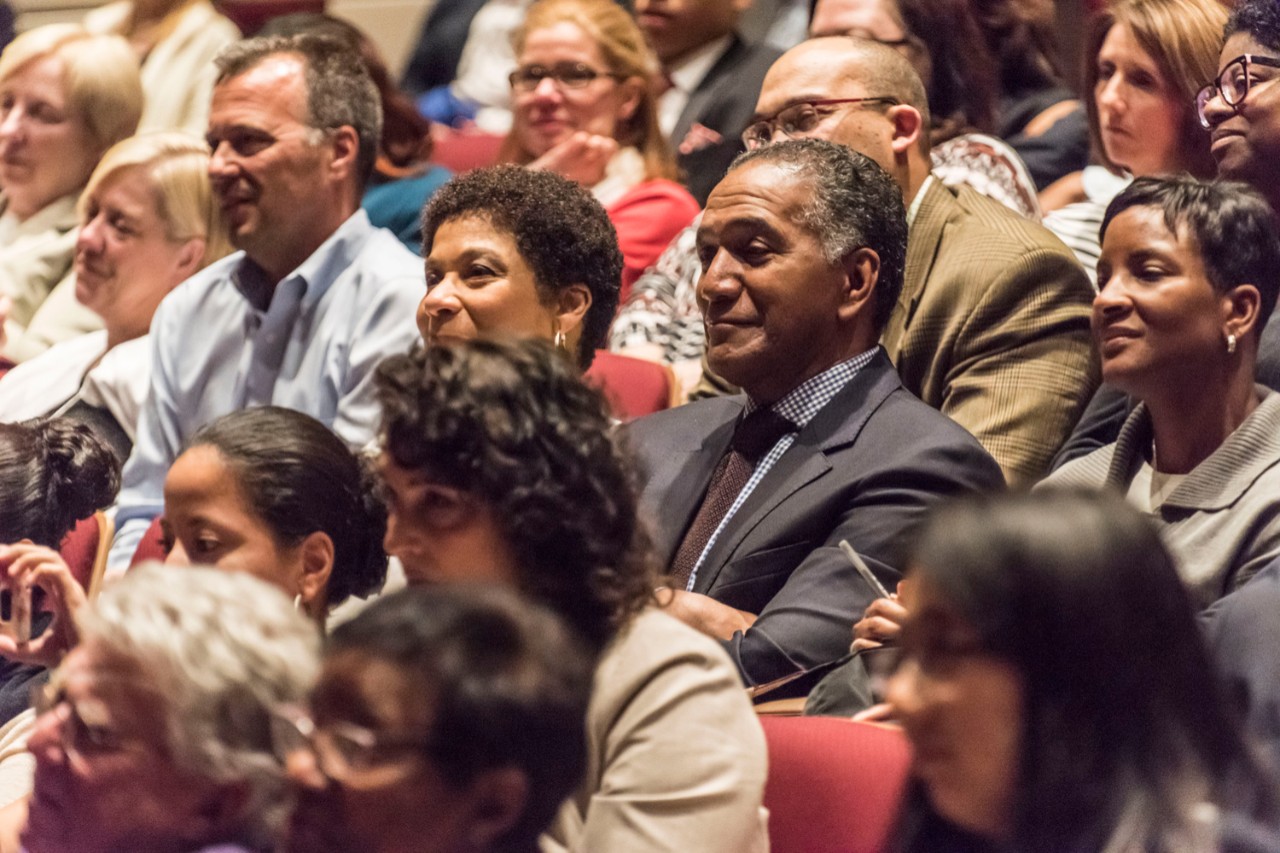 Some 500 members and guests of the University community gathered in Robsham Theater for the screening and panel discussion.

Pemberton also used the occasion to express appreciation for all those who had helped him in ways great and small – many of whom, including his wife and three children, were in the audience, he noted.

“I never imagined anything like this, to have the people nearest and dearest to me here,” said Pemberton about his decision to show the film at the University. “I wanted to say thanks to BC, where I gained the first understanding of what ‘home’ means.”

Although “A Chance in the World” covers only Pemberton’s high school years, it provides an overview of the horrific physical and emotional abuse he suffered in the foster home of the Robinsons, who see the boy as a source of income rather than a child in need of compassion. Anchoring the film is young actor Terrell Ransom Jr., who portrays the teenaged Pemberton as vulnerable and traumatized yet possessed of a tenacity that enables him to survive his torment and aspire to a better future – one that includes studying at Boston College.

The film ends as Pemberton has enrolled at BC, but the closing credits note that he went on to graduate from the University and now serves on its Board of Trustees. It also includes a video clip from his address at the First Year Convocation for BC's Class of 2020, for whom his book was shared reading.

“I never imagined anything like this, to have the people nearest and dearest to me here. I wanted to say thanks to BC, where I gained the first understanding of what ‘home’ means.”—Steve Pemberton

When the Robsham house lights came up after the film – prompting a standing ovation from the audience – attention turned to the real-life characters, events, and issues represented on the screen. 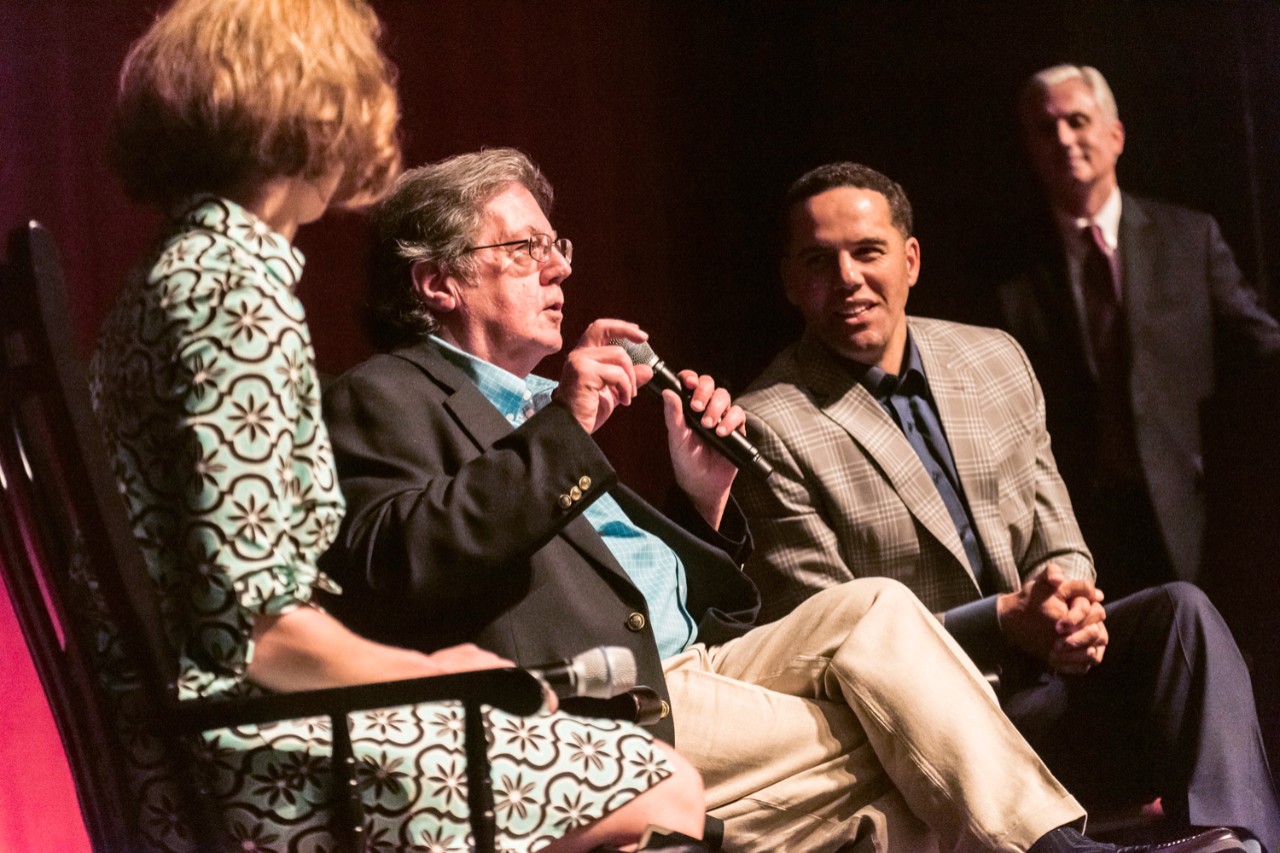 Steve Pemberton's high school mentor and former guardian John Sykes said his motivation in helping Pemberton came simply from a desire “to leave life better than what I found it,” and suggested to the audience that they, too, could someday act on that aspiration. He spoke during a panel discussion following the screening that included Pemberton and BC School of Social Work faculty member Tiziana Dearing, moderated by University Communications AVP Jack Dunn.

“Imagine your greatest dream about anything – dreams are important because they guide and nurture us,” said Pemberton. “The life I have is more magical than any of those dreams. It’s impossible to convey to my family, my friends how much they mean to me.”

Pemberton said that keeping his story to himself “would have been a betrayal of the gift that was given to me. I’ve had so many other people tell me that my story has helped to heal them, so I know I’ve done the right thing in sharing it.”

Despite greater media and public attention to child abuse, the “situation is more dire today than when I grew up,” he said. In writing A Chance in the World, and turning it into a film, “I tried to give those individuals the hope to hang on for that day when you decide you’ll put an end to [the abuse].”

Asked whether he had forgiven the Robinsons – the mother and father have since died – Pemberton said “forgiveness is between them and their creator; a reckoning will come, but not from me.” He added, however, that he hoped “their souls have found peace. I know I have.”

At another point in the discussion, Pemberton said, “I was destined to defeat them, because they were going against a force of nature: the people who did small things for me, to help me stay strong. When you’re up against an evil, you need those angels who come along.”

One such “angel,” Sykes – who took Pemberton into his home after Pemberton finally left the Robinsons – explained that he didn’t view his decision to care for Pemberton as “taking a chance.”

“It really wasn’t up to me to make the decision. It was something bigger than me, bigger than Steve. You can call it what you like. This was a no-judgment ‘Yes.’”

Sykes said his motivation in helping Pemberton came simply from a desire “to leave life better than what I found it,” and suggested to the audience that they, too, could someday act on that aspiration.

“An opportunity will come. It will show itself. And then you say, ‘Yes.’”

“[The] situation is more dire today than when I grew up. I tried to give those individuals the hope to hang on for that day when you decide you’ll put an end to [the abuse].”—Steve Pemberton 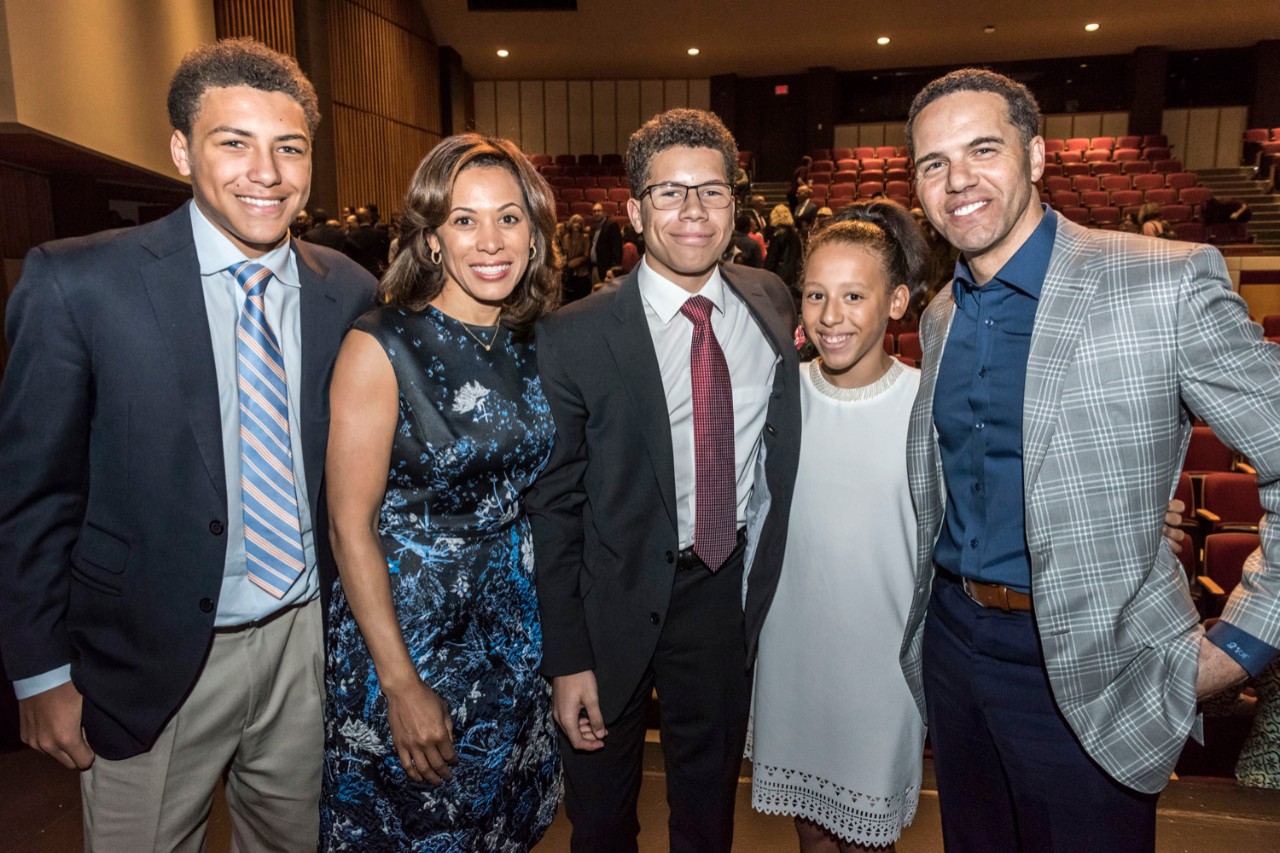 Pemberton was accompanied at the screening by his wife,Tonya; their sons, Quinn and Vaughn, and their daughter, Kennedy.

Dearing, former president of Catholic Charities of the Archdiocese of Boston, touched on the question of effective monitoring and care of foster children raised by “A Chance in the World.” There was, she said, “no satisfactory answer” for the lack of safeguards in Pemberton’s and other children’s cases, although she refrained from criticizing social work and human services professionals and pointed to “the bloodless dimension of bureaucracy.”

“We have to recognize all children are our children, and the truth is, we’re not there yet,” she said. Change will come when more people understand that their choices and decisions as individuals also affect the greater community around them.

“We have to hold ourselves accountable,” said Dearing, “so that when we say ‘Yes,’ like John Sykes did, we will see the joy of doing good that comes forth.”