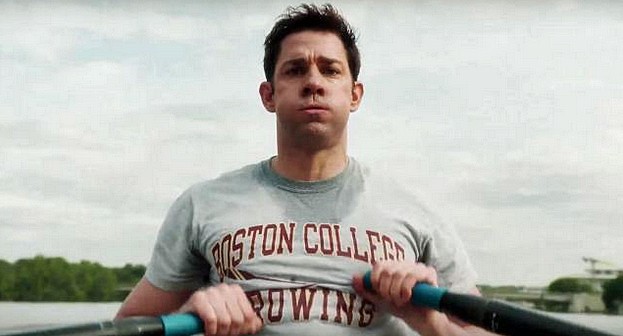 Jack Ryan '72, played by John Krasinski, sports a BC shirt while filming a rowing scene on the Potomac River.

Ryan, the fictional character created by best-selling author Clancy for a series of espionage novels including Patriot Games, The Hunt for Red October, Clear and Present Danger, and The Sum of All Fears, graduated from Loyola High School in Maryland before enrolling in Boston College, where, in 1972, he earned a bachelor's degree in economics, with a minor in history.

Clancy, himself an alumnus of Loyola University Maryland, is believed to have based the world-famous BC graduate on a high school friend who attended BC and became a U.S. Navy helicopter pilot in Vietnam. The character Clancy created was proud of his Jesuit education, once remarking that “Jesuit products run the world—we’re just humble about it.”

Following Clancy's death in 2013, Boston College Magazine wrote of his most famous character:

Though Mr. Ryan would later joke that he went to Boston College because its degree (along with that of the College of the Holy Cross) was the surest ticket to a job as an FBI agent, he began a career as a certified public accountant shortly after graduation...Mr. Ryan did not speak often of his alma mater, but never spoke of her except in praise, opining once that his courses in metaphysics had served him well. “The Jesuits,” he said to a friend, “make you spend a semester on [metaphysics].” Adding after sipping at a handy cocktail, “Whether you want to or not.”

Jack Ryan has been portrayed in numerous screen adaptations by actors including Harrison Ford, Alec Baldwin, Ben Affleck, and, in the new series, John Krasinski. Well-known for his role as Jim Halpert in the television series “The Office,” Krasinki will portray Ryan as a CIA analyst drawn into a dangerous hunt for a terrorist.

The character's school spirit was evident during filming for the new series last year in Washington, D.C., when Krasinski, a native of Newton, Mass., was spotting rowing on the Potomac clad in BC gear.

Watch a trailer for "Tom Clancy's Jack Ryan" below.