A documentary by BC filmmakers on Lou Montgomery, BC's first black football player, and the racial climate of the 1930s and '40s premieres at the MFA Feb. 20. 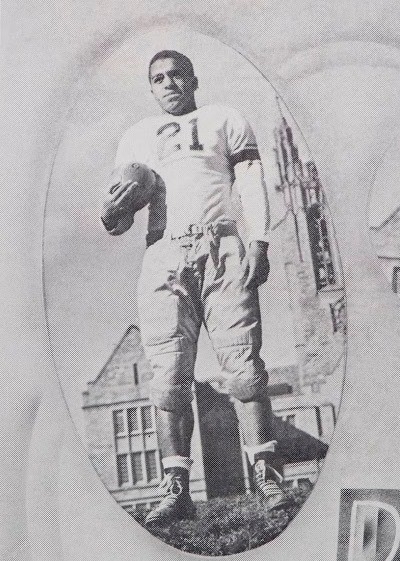 A new documentary by Boston College filmmakers explores the racial climate of the era that excluded Lou Montgomery, the first black football player at Boston College, from playing some games, including two bowl games.

"Lou Montgomery: A Legacy Restored" (2015, USA, 45 min.) will be screened at the Museum of Fine Arts on Saturday, Feb. 20 at 3 p.m. in the Remis Auditorium. The film was produced by Susan Michalczyk, associate professor of the practice in the Honors Program, and John Michalczyk, a professor of fine arts. BC senior Cai Thomas served as editor and cameraperson.

In 1937, Montgomery became the first black football player at Boston College. With his exceptional speed and ability to play both offense and defense, he contributed to the building of a championship team. Although a member of BC’s “Team of Destiny,” Montgomery was excluded at times from playing during the season, as well as from two bowl games due to the racial prejudice of the Jim Crow era. According to Susan Michalczyk, over time, Lou Montgomery and his contributions were forgotten, as were his sacrifices.

The MFA screening will be followed by a Q&A with Susan and John Michalczyk and Cai Thomas.