Each year some 20 undergraduate dance troupes at Boston College spend the better part of fall and spring preparing to compete at the annual AHANA Leadership Council Showdown, held in Conte Forum in April. Among these groups is Masti, the official dance team of the South Asian Student Association, whose Bollywood-inspired blend of traditional Indian and hip-hop styles won Showdown’s culture category in 2014 and 2015. (Masti is a Hindi word for “fun.”) This April, Masti will vie for an unprecedented three-peat title. Director of University photography Gary Wayne Gilbert captured the troupe as it came together in a November rehearsal, prepared for a campus-wide show in December, and reconnected in January. To learn more about Masti, read Boston College Magazine’s “We Are Masti,” in the Winter 2016 issue. 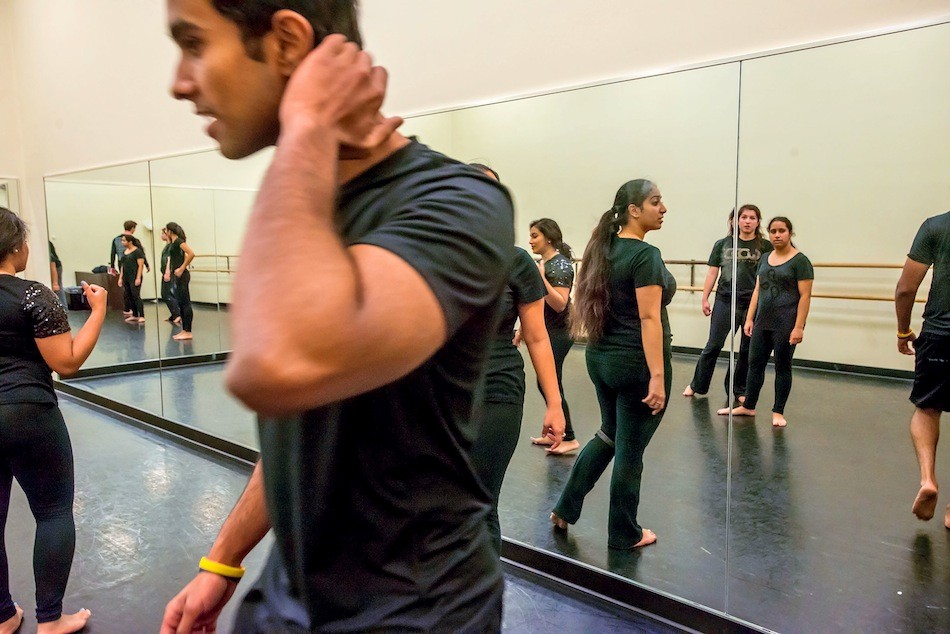 Ram Arivudainambi ’16 (foreground), at the start of a late November practice in the Brighton Dance Studio. Masti has nine members in all. 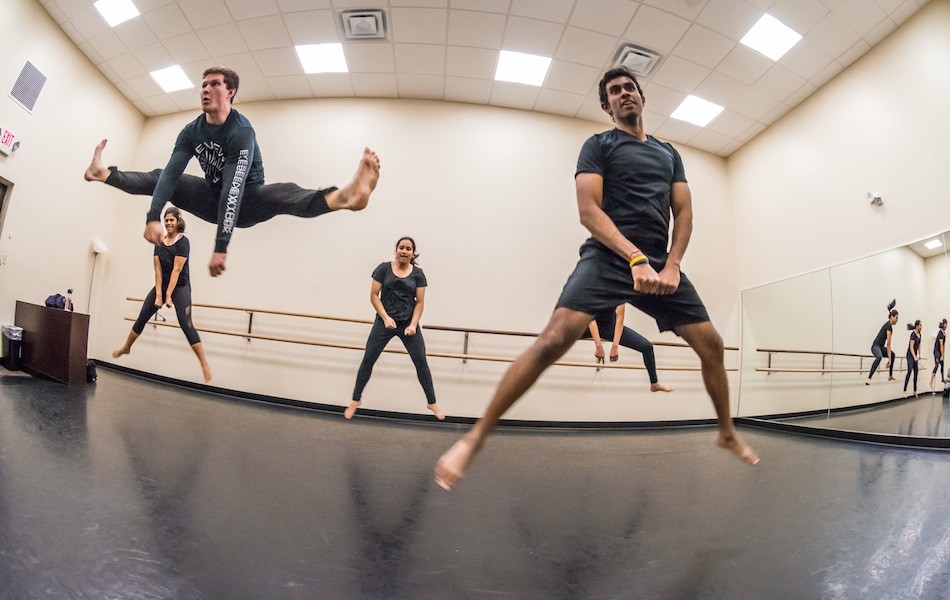 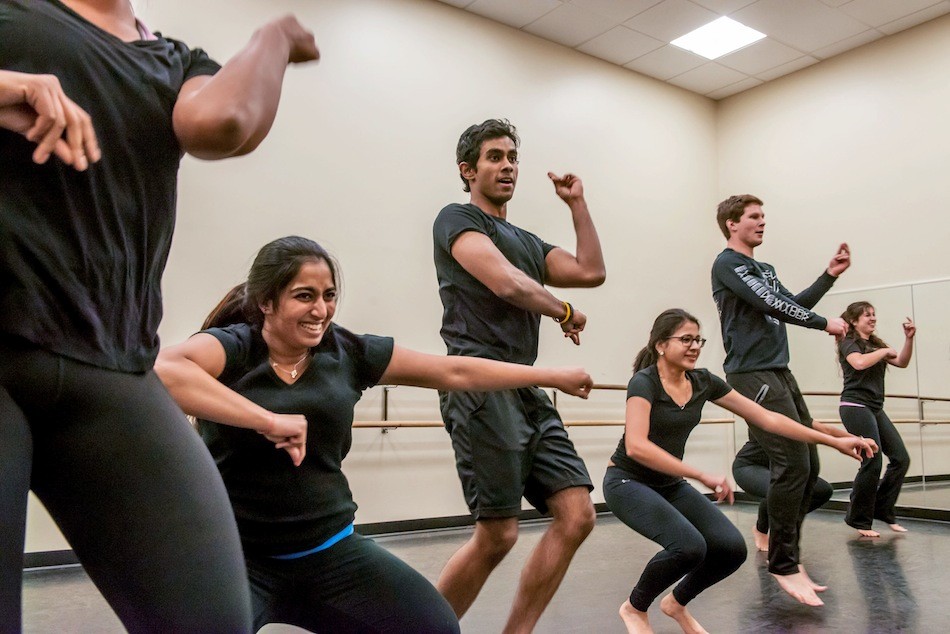 Practicing “partner snaps,” a set of moves created by the group, to “Marjaani,” a song from the 2009 Bollywood film "Billu." From left: Patel (obscured), Aash Shrivastav ’16, Arivudainambi, Parashar, Gorelov, and Maddy Chin ’16. 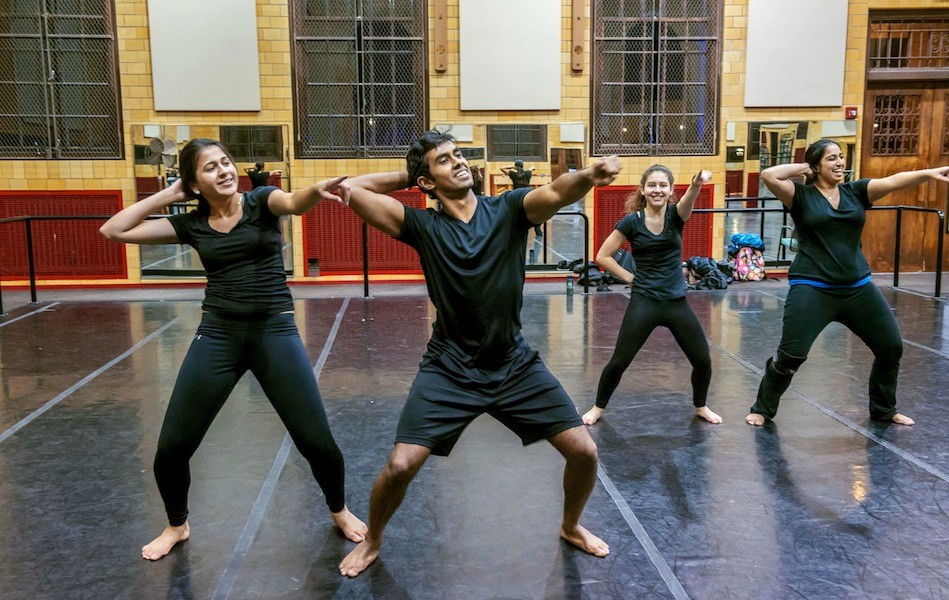 Rehearsing “India Waale” from the 2014 Bollywood action film "Happy New Year" in the larger, main room of the Brighton Dance Studio. From left: Parashar, Arivudainambi. Craparotta, and Shrivastav. Membership in Masti is open to any undergraduate with a “willingness to have fun,” according to a captain. 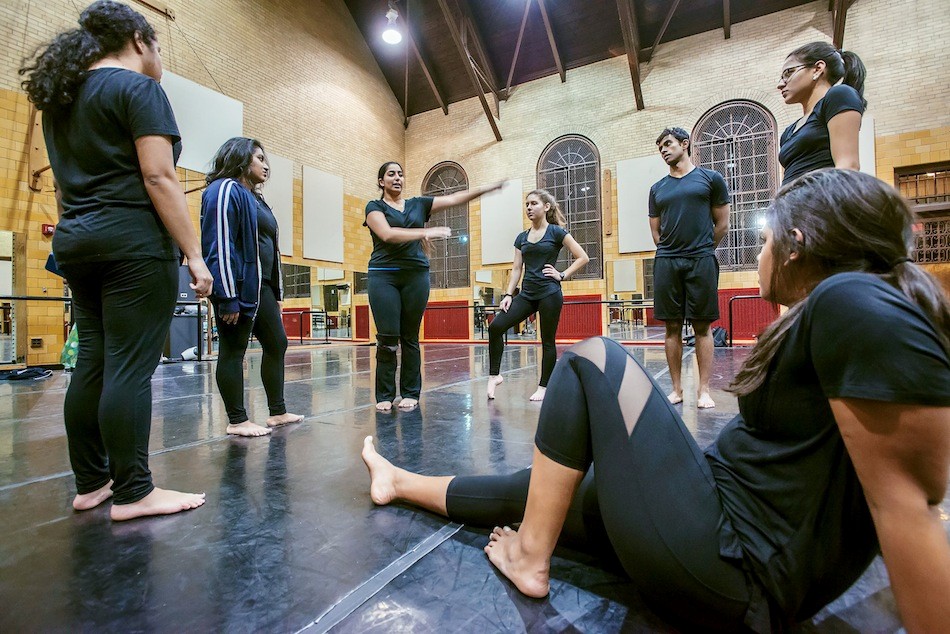 Shrivastav (arms outstretched), one of four captains, critiques a run-through. 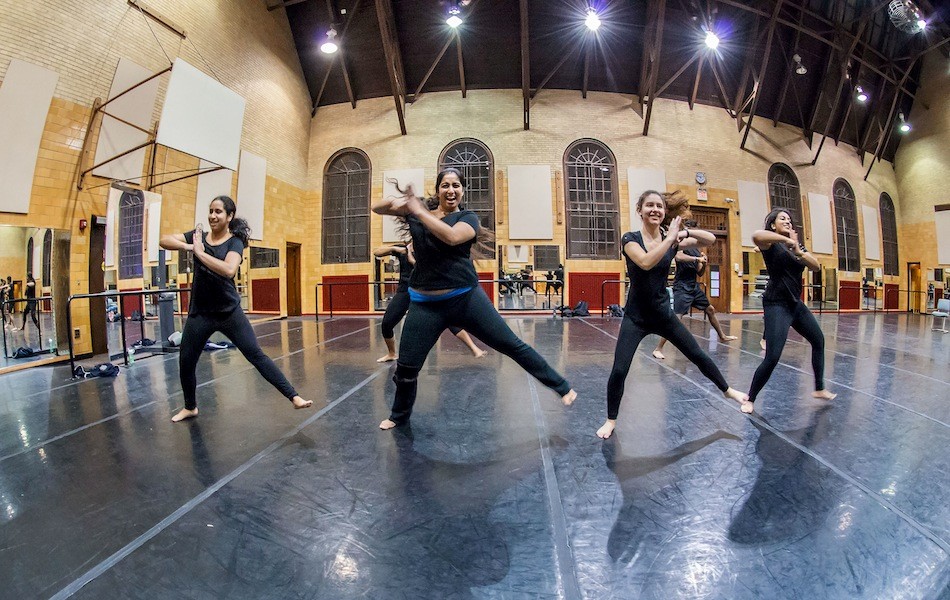 Rehearsing “Mashallah,” from the 2012 Hindi-English romantic thriller "Ek Tha Tiger" (“And There Was a Tiger”). From left: Shanbhag (also a captain), Shrivastav, Craparotta, and Ari Ratnaseelan ’16 (another captain). 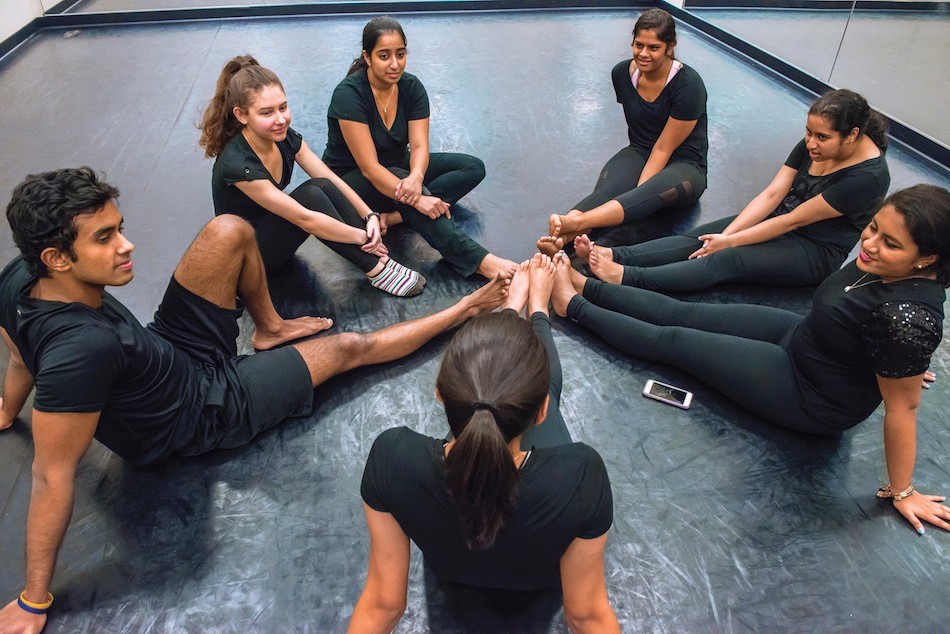 Most practices end with “circle time,” in which dancers share their highs and lows since the group last met. Clockwise from left: Arivudainambi, Craparotta, Shrivastav, Patel, Shanbhag, Ratnaseelan, and Parashar. 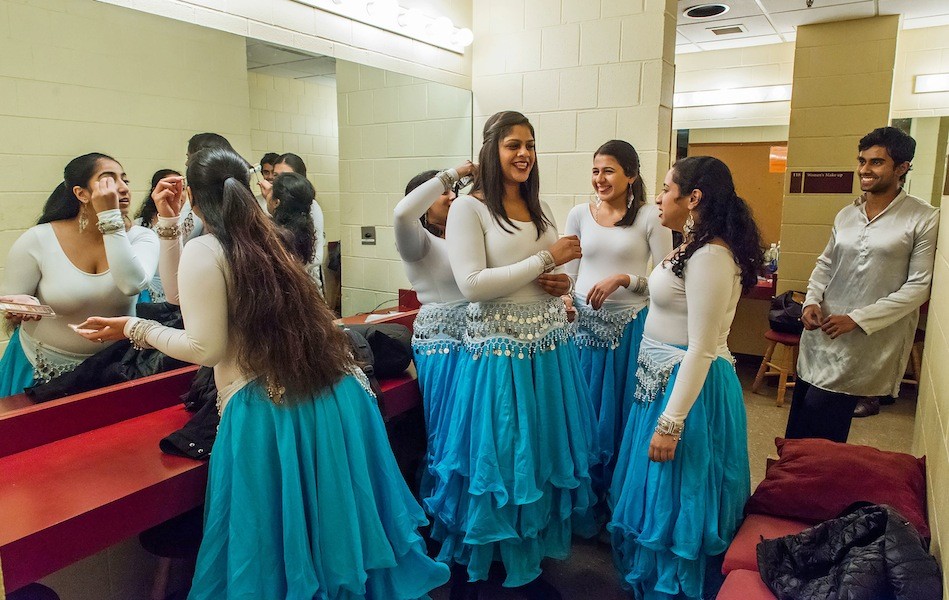 In the Robsham Theater green room on December 2, before the dress rehearsal for a showcase of 11 Boston College dance troupes, organized by the University’s Arts Council. 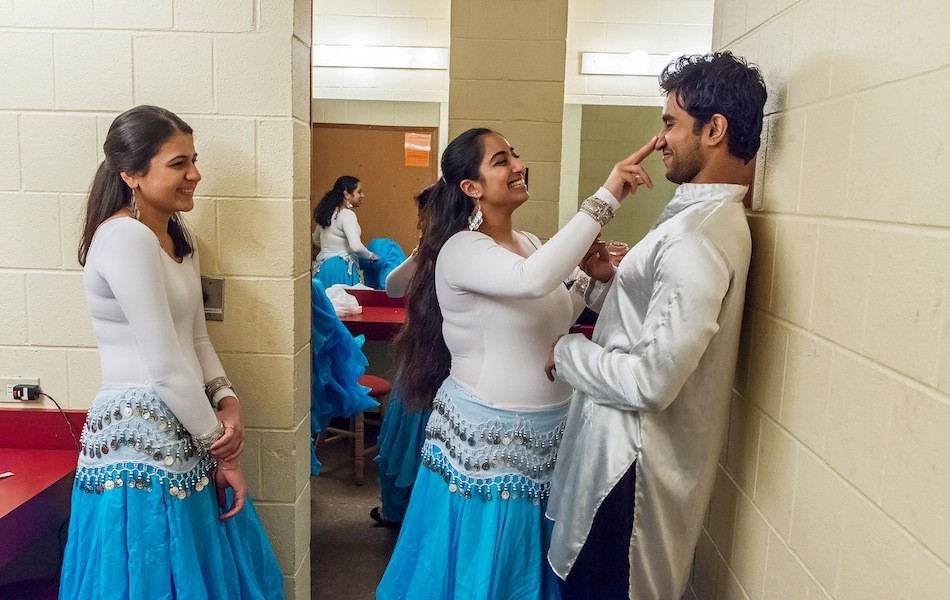 Foreground, from left: Parashar, Shrivastav, and Arivudainambi. The women wear kamarband belts that will jingle when they dance. 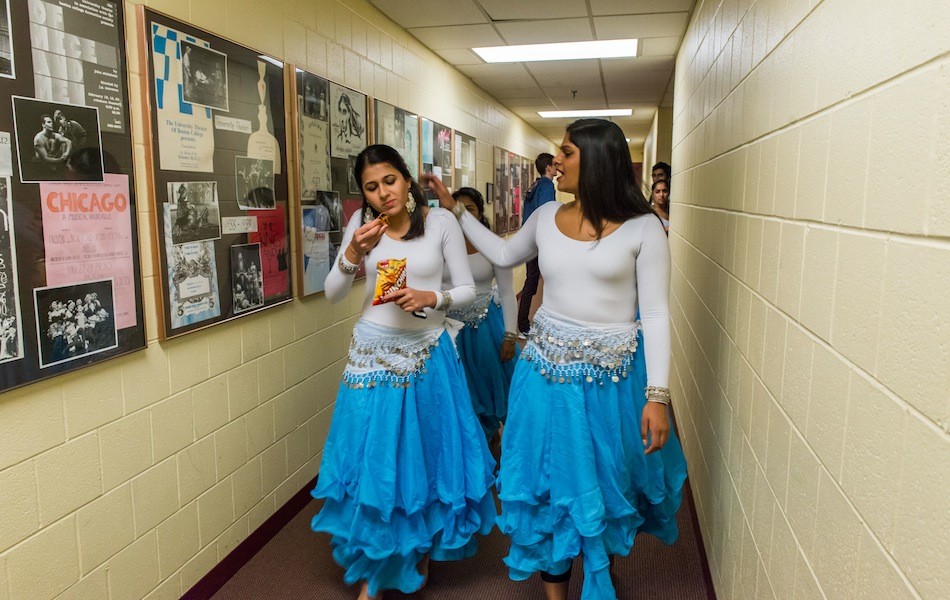 Parashar (left) and Patel en route to the Robsham main stage for rehearsal. 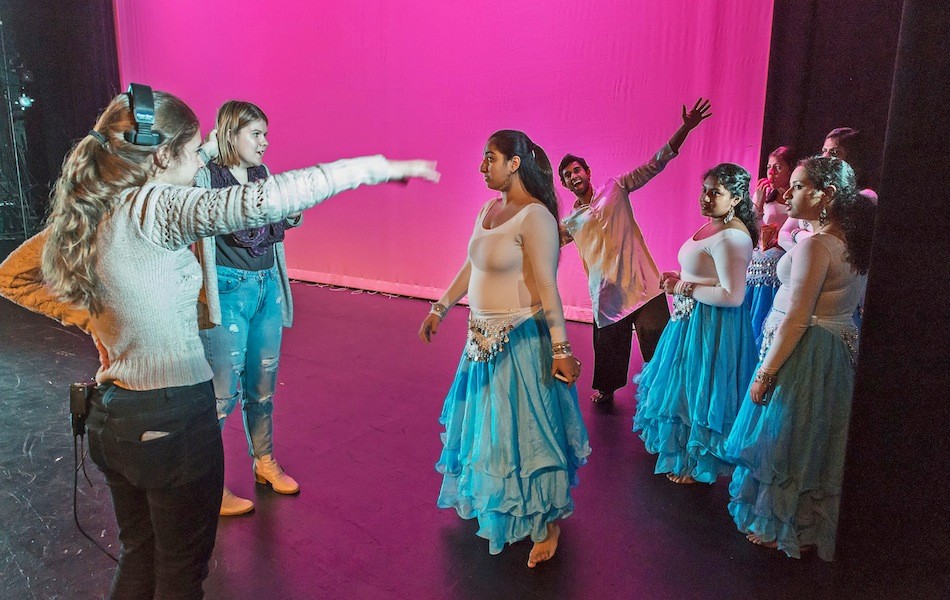 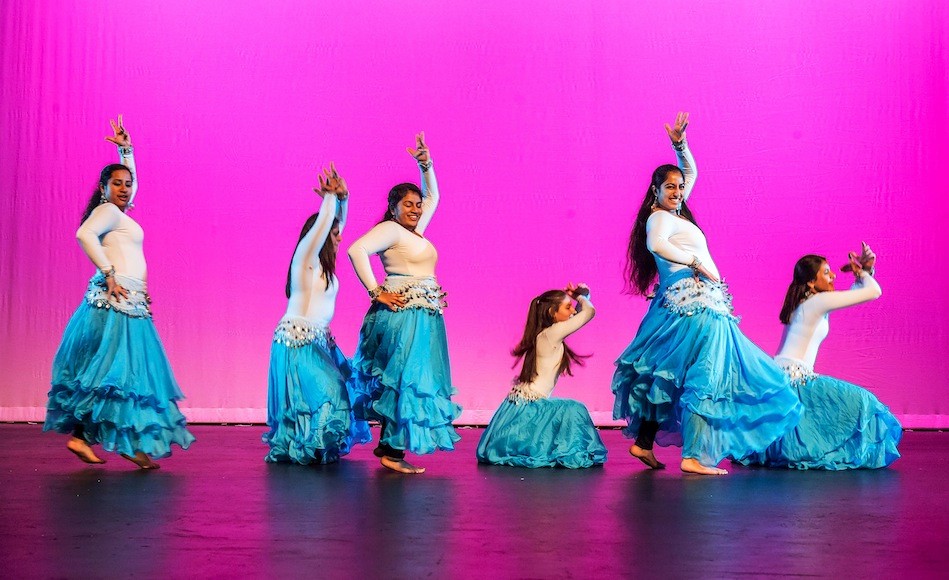 Performing thumkas (hip-checks) to “Worth It,” by the American girl group Fifth Harmony. 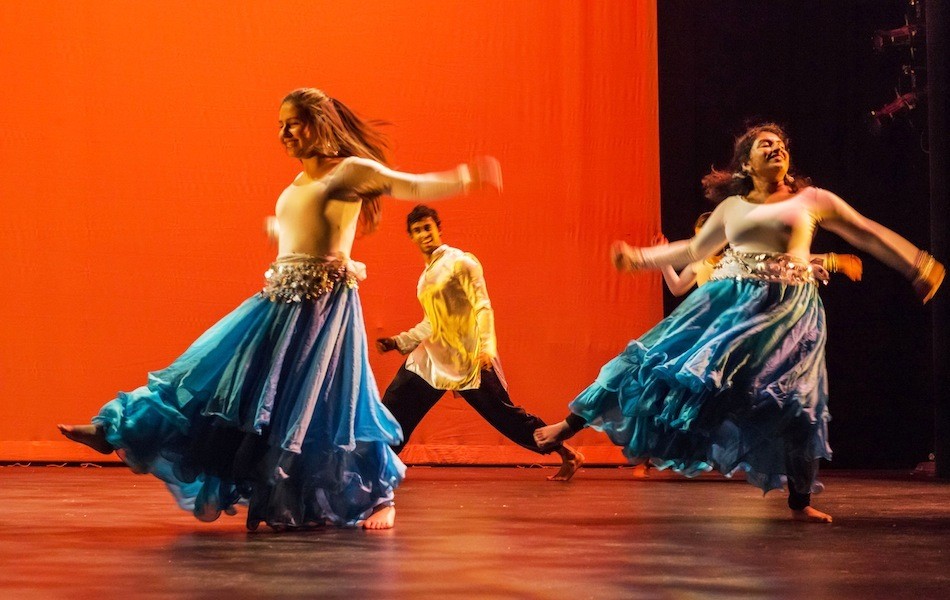 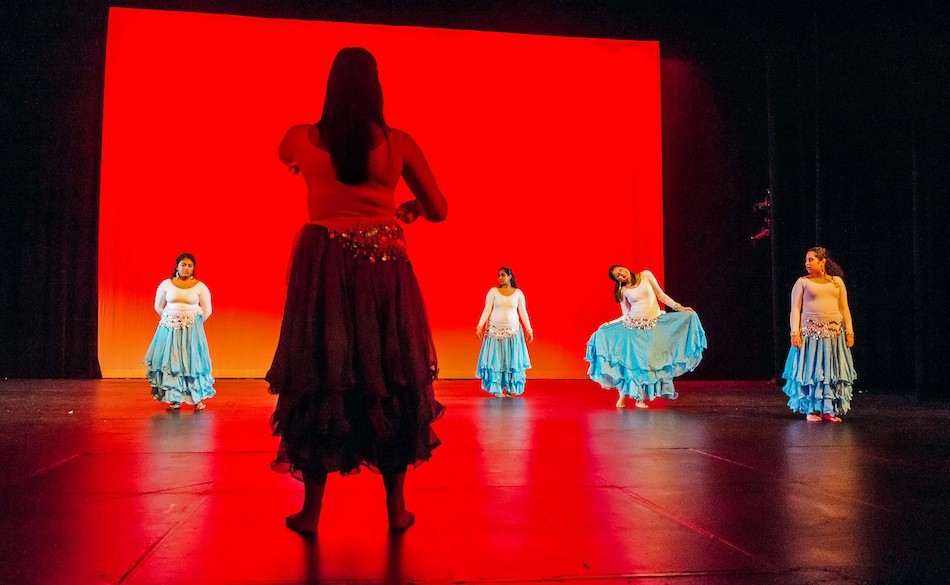 Patel, another captain, adjusts the dancers’ spacing on the Robsham main stage. 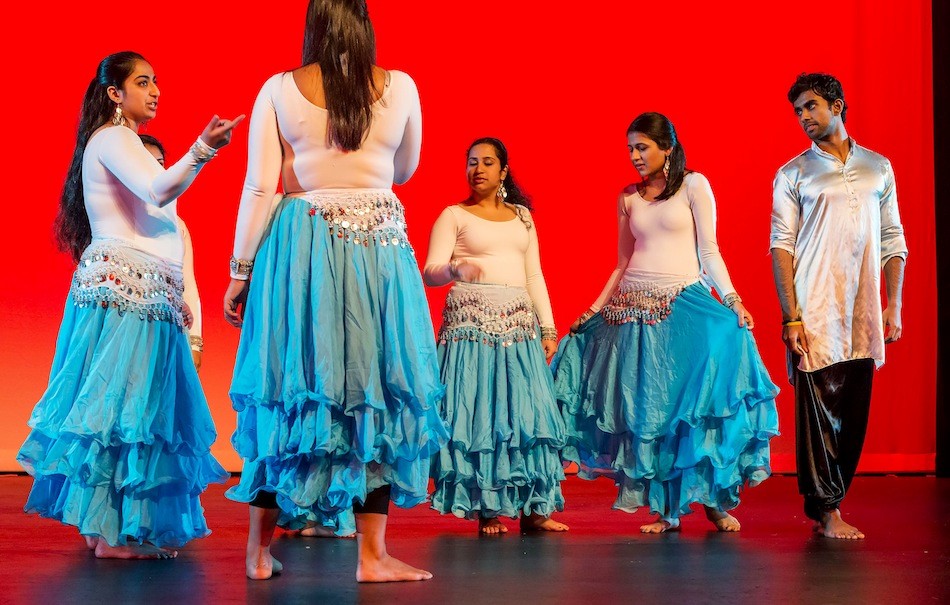 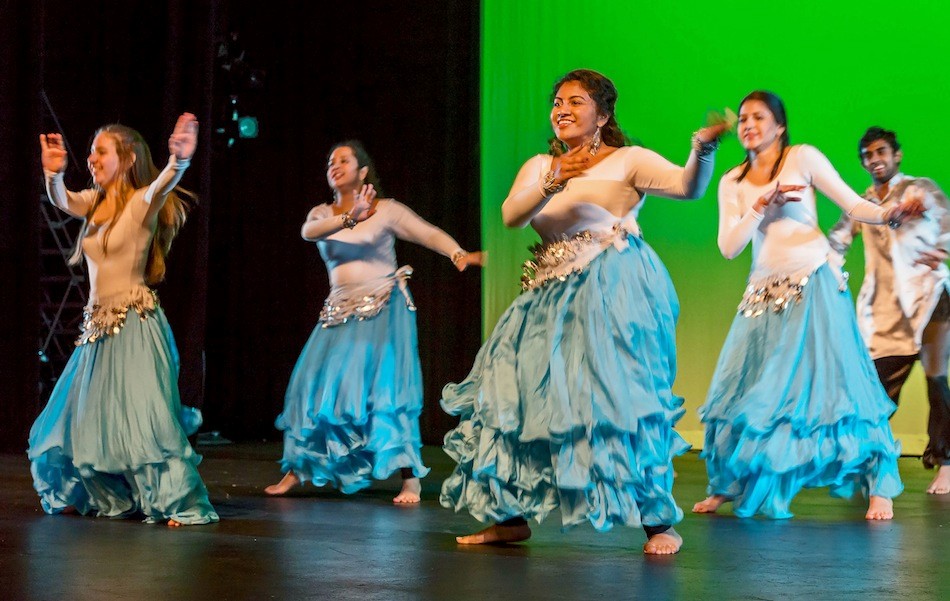 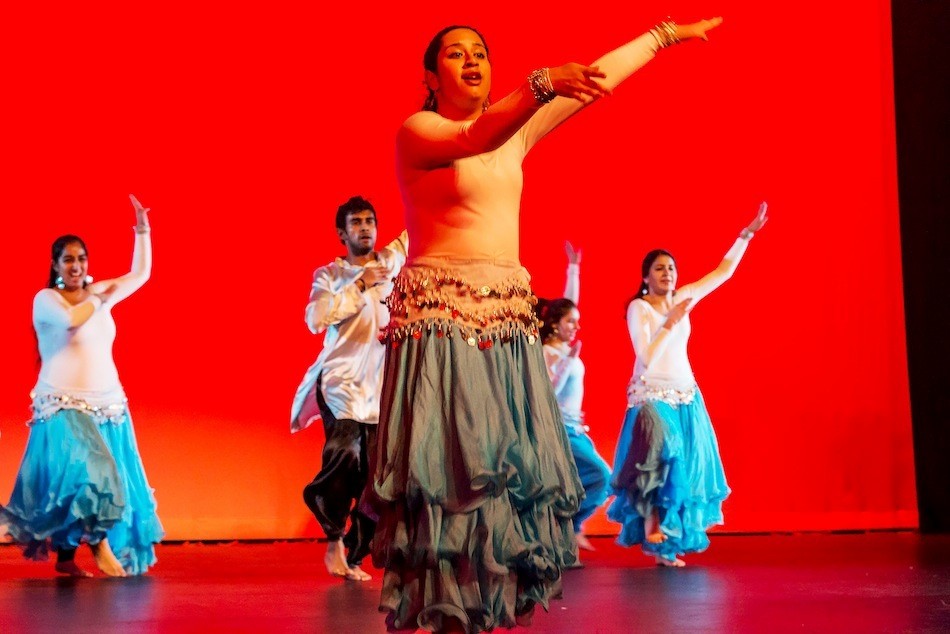 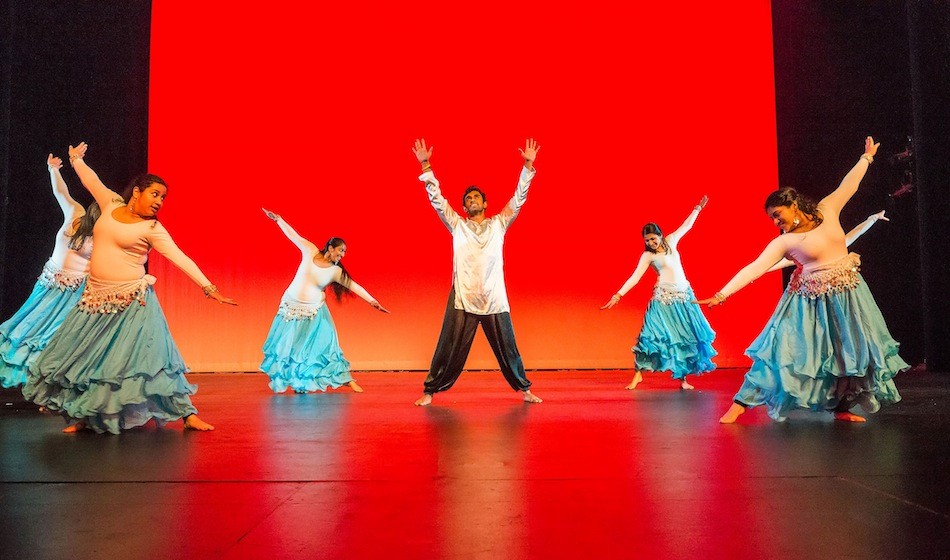 Arivudainambi at the center of the final formation of “India Waale.” 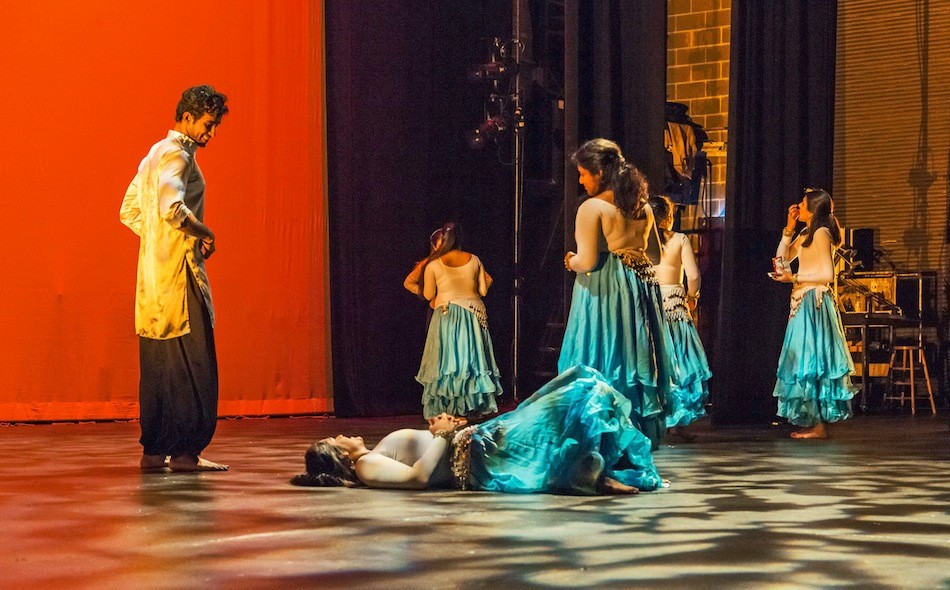 Shrivastav rests after a second run-through in Robsham. 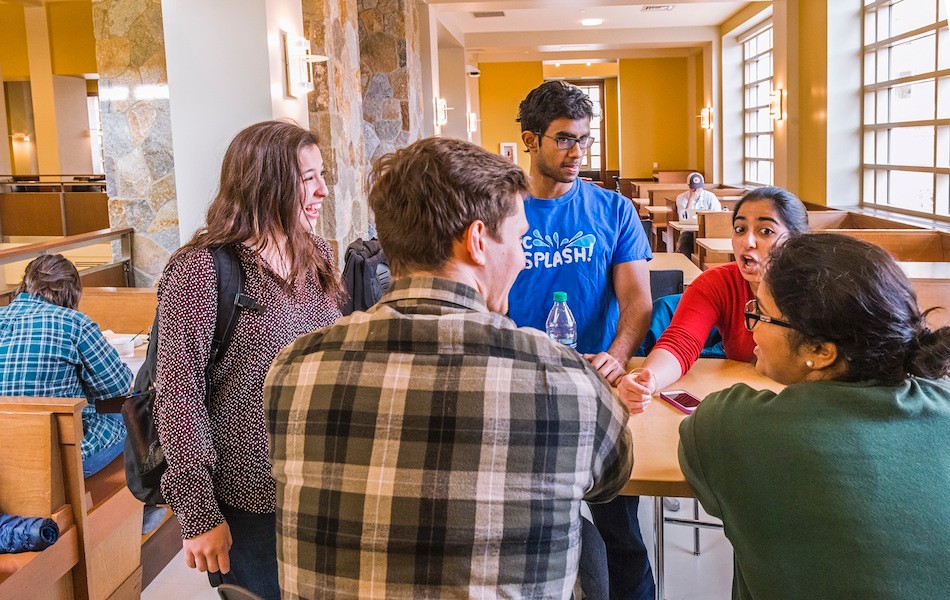 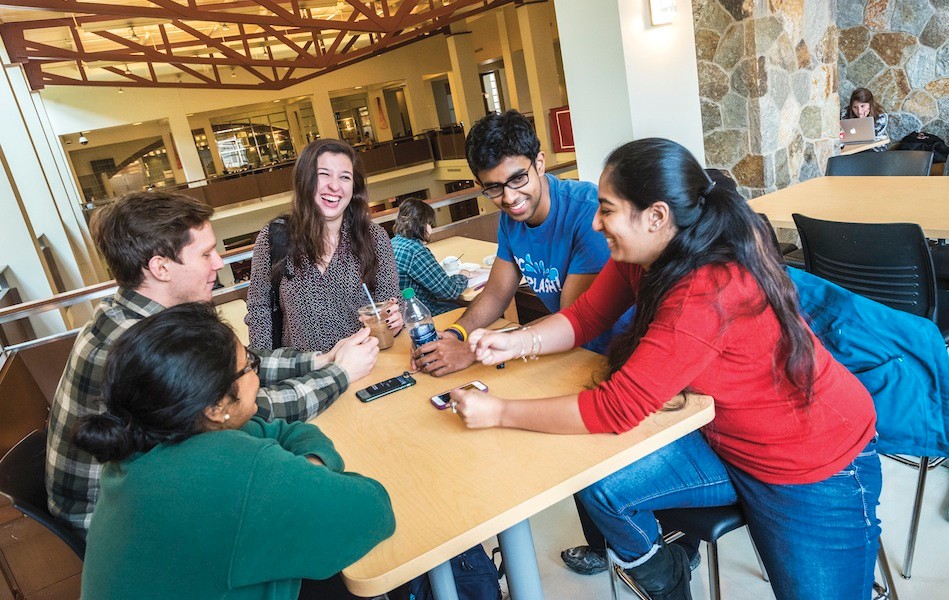 Clockwise from lower left: Ratnaseelan, Gorelov, Chin, Arivudainambi, and Shrivastav.
Back To Top
Back To Top