Using ring-closing metathesis to exploit the properties of carbon-carbon double bonds, researchers from Boston College and the Massachusetts Institute of Technology have developed a new catalytic approach for the preparation of compounds essential to drug discovery, the team reported in the journal Nature.

The catalyst, which contains the metal molybdenum, readily transforms a linear organic molecule that contains a C–C double bond substituted with a boronate group into an E isomer-selective macrocyclic compound through ring-closing metathesis, according to the researchers. 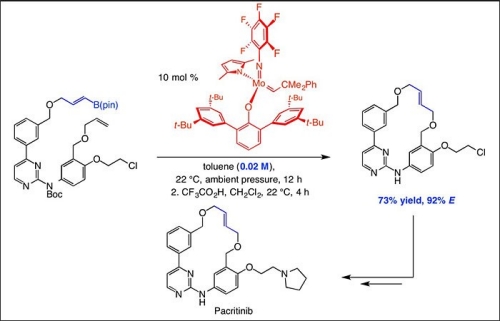 A new catalytic approach developed by BC and MIT researchers uses ring-closing metathesis to produce a compound with characteristics central to drug discovery research.

The team reported the findings in the article “Kinetically E-selective macrocyclic ring-closing metathesis.”

"As is often the case, the effective catalyst for a reaction must have many different characteristics. It should be robust yet sufficiently reactive; it should be able to give high selectivity and not subsequently destroy it. It is not easy to satisfy all of these requirements," said Boston College Vanderslice Millennium Professor of Chemistry Amir Hoveyda, a lead researcher on the team, along with MIT Keyes Professor of Chemistry and 2005 Nobel laureate Richard R. Schrock.

Research into innovative therapeutic drugs often focuses on "large ring" compounds that contain 12 or more atoms, composed mainly of carbon. Many of the rings contain at least one carbon-carbon double bond, which are known as alkenes or olefins. The isomers of these bonds can be either Z-shaped or E-shaped. The challenge in fine chemical synthesis is separating the two in order to access the desired compound, Hoveyda said. 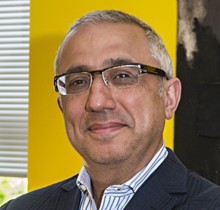 "It is typically impossible to separate these two isomers," said Hoveyda. "Yet, a drug’s potency often depends on whether the double bond is E or Z. Even if separation of mixtures were possible, it is prohibitively expensive since half of the material would be discarded."

Hoveyda and Schrock, who have collaborated on research into catalysts for 20 years, set a precedent for their new approach five years ago, when their team prepared a Z-isomer carbon-carbon double bond in a large ring by means of ring-closing olefin metathesis.

Hoveyda and Schrock, who have collaborated on research into catalysts for 20 years, set a precedent for their new approach five years ago, when their team prepared a Z-isomer carbon-carbon double bond in a large ring by means of ring-closing olefin metathesis.

"What led us to this approach was the result of years of trying to understand how this important class of transformations, called olefin metathesis, really works," said Hoveyda. "It was based on the knowledge gained from such investigations that we were eventually able to solve this problem."

Central to the advance, the team reported, is the stereoselective conversion of a linear hydrocarbon molecule that contains an E-alkenyl boron moiety into E-macrocyclic alkenes, with minimal formation of the undesired Z isomers.

"It is crucial that we have ways to access in a reliable manner samples of each isomer in high purity—98 percent or more through this method," said Hoveyda. "Prior methods, as we show in the paper, give 15 to 50 percent—at times even more—of the undesired Z isomers that cannot be separated from the desired E isomers. Those samples are by and large useless as far as getting reliable results in biological testing is concerned."

Researchers were surprised that high E selectivity was the result of the use of a boronate that is often used in an entirely different type of reactions, known as catalytic cross-coupling. The dramatic reduction in the use of a purifying solvent also cleared a major hurdle, particularly in the development of pacritinib, Hoveyda said.

There are a number of unresolved challenges posed by the olefin metathesis class of chemical reactions, he said. "We do not know if the catalysts and strategies that we already have developed will be good enough, or if we need to innovate."

Hoveyda cited the work of Shen, the report’s first author, and his undergraduate mentee Xu, who becomes one of a very small number of undergraduate researchers to share co-authorship on a paper in the prestigious journal.

Shen said Xu’s work on the project was part of the BC junior’s development of the hands-on experimental skills to complement his advanced understanding of chemistry theory and subject matter.

“As a mentor, you have to be a teacher, you have to make sure your students are safe in the lab, and you have to be patient,” said Shen, who has accepted a faculty position at Wuhan University in his native China. “I want to teach any student that we can learn from our mistakes and sometimes we make new discoveries from those mistakes.”

Xu, who grew up in Shanghai, said his work in the Hoveyda group has fueled his interest in chemistry and that his next goal is to pursue a Ph.D. in the discipline.

“What I enjoy most is the feeling of accomplishment – like when you get a pure product for a reaction,” said Xu. “You’ve created something on your own by your own hands. You’ve done something that hasn’t been done before.”