As she explains her research to a visitor, Boston College School of Social Work Associate Professor Margaret Lombe draws on the pieces of paper in front of her -– not random doodles, but a succession of small squares and other shapes in vertical or horizontal arrays that she connects with lines.

“I’ve found this a good method to organize thoughts,” explains the Zambian-born Lombe, who teaches in BCSSW’s Global Practice program. “It’s something I try to get my students to do: You externalize your ideas, and progress from one to the other in a way that is coherent and meaningful.” 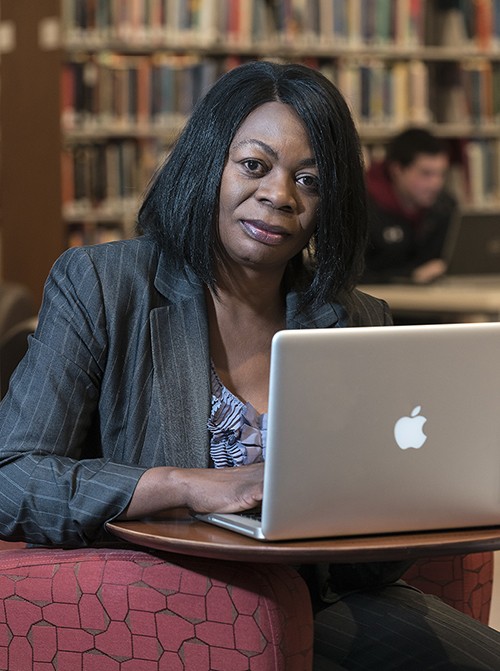 Lombe’s research interests are all about inter-connective ideas and concepts, grounded in international social development with a particular focus on social inclusion and exclusion, and capacity-building strategies. She has examined issues like food security and its relationship to health and poverty; HIV/AIDs in sub-Saharan Africa; and the empowerment of orphaned and vulnerable children.

Recently, she provided consultation to a United Nations conference on housing and sustainable urban development that adopted an agenda, Habitat III, to promote more socially and economically inclusive communities. She’s also conducted evaluations for non-governmental organizations like Catholic Relief Services and Oxfam America. Lombe’s scholarly work has local relevance as well: In partnership with Catholic Charities, she’s been conducting a study involving how food pantries in Dorchester are utilized, and is planning a similar project for Newton.

Coming to BC in 2004 enabled Lombe to link these and other experiences with the practicalities of social work education, much like she connects the geometric forms she scrawls on paper.

“When I started out in social work, I could see how practice was informed by research, but it also raised a question: How does research inform practice?” says Lombe, who studied in Kenya and Washington University in St. Louis. “For me, it’s almost impossible to do research without a ‘so what?’ – how will this affect the lives of people I’m trying to help?

“What drew me to Boston College was its social justice mission, and I believe the School of Social Work is an exemplification of, and has a leadership role in, that mission,” says Lombe, a participant in a self-study of BC’s global engagement as part of the University Strategic Planning Initiative. “What we do isn’t just an intellectual exercise. If our work helps even one person, then we’ve made a contribution. That is the key.”

The UN conference for which she consulted has the potential to benefit many people, of course, and touches on one of her primary interests, the socioeconomic dimensions of inclusivity.

“Poverty is more than the lack of wealth or resources; it’s the lack of participation in economic and civic spheres of the community, like employment,” she explains, drawing a box and a line extending out from it. “So how do we make cities inclusive, such that more people can participate? How, for example, could housing be designed? How could transportation be improved?”

Lombe and her students have been studying the agenda resulting from the UN conference, which featured 175 aspirations toward making inclusive cities, and how a social work perspective can play a role in its implementation.

“You have to go beyond identifying the needs, and how to address them. You need to have indicators, and establish baselines, so that you can measure progress or see where progress is not being made.”

Similarly, in the area of food security – the adequacy of individuals’ or families’ access to nutrition – Lombe scrutinizes the pattern of food choices among low-income households and the relationship to health outcomes. The findings may surprise those who assume such households’ lives are nothing but chaos and disorganization, she says. In fact, those living in poverty tend to devise intricate networks of sources and strategies to obtain food.

"When I started out in social work, I could see how practice was informed by research, but it also raised a question:  How does research inform practice?  For me, it's almost impossible to do research without a 'so what?' - how will this affect the lives of people I'm trying to help?"

For example, Lombe says, instead of being a desperate, last resort, food pantries are more often a built-in component of the monthly food budget. Those who use them regularly, she says, will know which items are most likely to be found on a given day or at a given time.

“These kinds of details are enlightening, but are only part of the story,” says Lombe, as she begins another succession of drawings. “What kind of time investment – including transportation – does this require of the person in the household making the food purchases? And how does this affect time elsewhere in the household? What is left for time with family, or for basic leisure and relaxation? What we find is these low-income households are also ‘time-poor.’

“Then you have to take another step back and look at the impact on health. How does nutrition enter into the household’s food choices, if at all? And what about the accumulation of stress and anxiety in trying to access the food sources? These are the kinds of questions social workers have to ask to help in creating solutions – even if it’s just one household at a time.”

The social work profession can, and should, join its perspectives with that of other fields to solve such critical problems, adds Lombe, who is co-teaching the Global Citizenship Seminar with colleagues from the Law School and School of Theology and Ministry.

“The challenge is to start small, forge a series of impacts, and build on these until you see change on a wider and wider scale. I feel Boston College is a place where this is possible.”